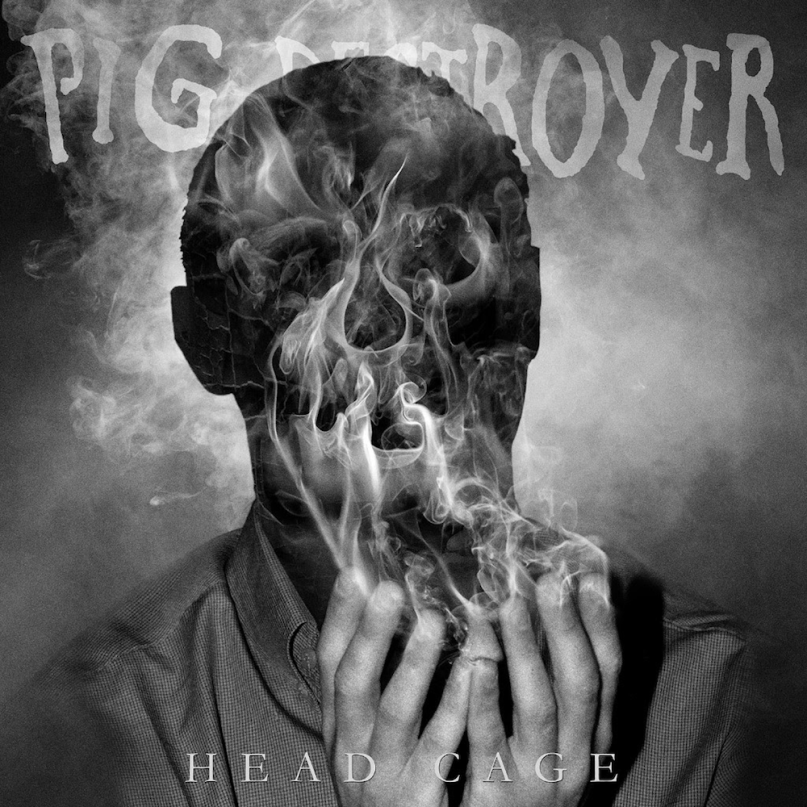 The Lowdown: After a six-year gap between albums, Pig Destroyer’s sixth disc, Head Cage, acts not just as a followup to their previous LP, Book Burner, but also to all the various experiments guitarist Scott Hull has undertaken between then and now, both in Pig Destroyer and his other grind band Agoraphobic Nosebleed. With the studio debut of long-time live bassist John Jarvis (also of Agoraphobic Nosebleed) as well as the studio experiment of the 2013 Mass & Volume EP under their belts, the now-5-piece explores not only the explosive and acerbic grindcore they are known for, but also sludge, doom and death metal, relying this time more on groove and riffs than on the hyper-speed, skin-tearing blastbeats and tremolo picking grindcore is typically known for. The album continues Pig Destroyer’s reign as one of the more artful grindcore acts.

The Good: Pig Destroyer continue their sonic expansion beyond the realms of grindcore, showing ample creativity and proficiency in more technical, progressive, groovy and punky realms. The players’ dabblings within other genres pay off here, giving a more well-rounded album than ever before with more song variance than they’ve had at any point prior in their career, all of which is delivered well and still maintains the sense of menace and threat that fans look for in a good grindcore album. Vocalist J. R. Hayes continues to be the best lyricist in grindcore, and the alchemical mixture of Blake Harrison’s noise and electronics with mastermind Scott Hull’s meaty guitar work continues to dazzle as a true force of extreme music.

The Bad: Despite the shift away from pure grindcore, the record still doesn’t quite feel expansive enough. Album closer “House of Snakes”, their most ambitious track to make it onto a full LP, ironically highlights how far they could have gone on the album. That brief taste of heady but still very physical progressive grindcore, a la Cephalic Carnage or Gridlink, make revisiting some of the earlier tracks, which remain potent bruisers, a little bit frustrating. Likewise, while the grooves are delivered well here, the disc can use one or two more blistering cuts.

The Verdict: The sonic evolution of Pig Destroyer from a straight-ahead grindcore band to a more diverse and well-rounded extreme metal group continues apace. On Head Cage, the group delivers their signature grind sound but mix in elements of noise, sludge, death metal, doom, hardcore, and a little bit of technical and progressive elements, producing a richer whole. This experimentation, however, leaves them at a crossroads that adversely affects the disc; a more focused sonic direction would have been more potent and a more adventurous one would have been more exciting. Still, every track delivers a bruising and it’s hard to imagine anyone interested in the group being disappointed by the album.