Canadian clinical psychologist has stirred controversy for his views on feminism, gender identity, and political correctness 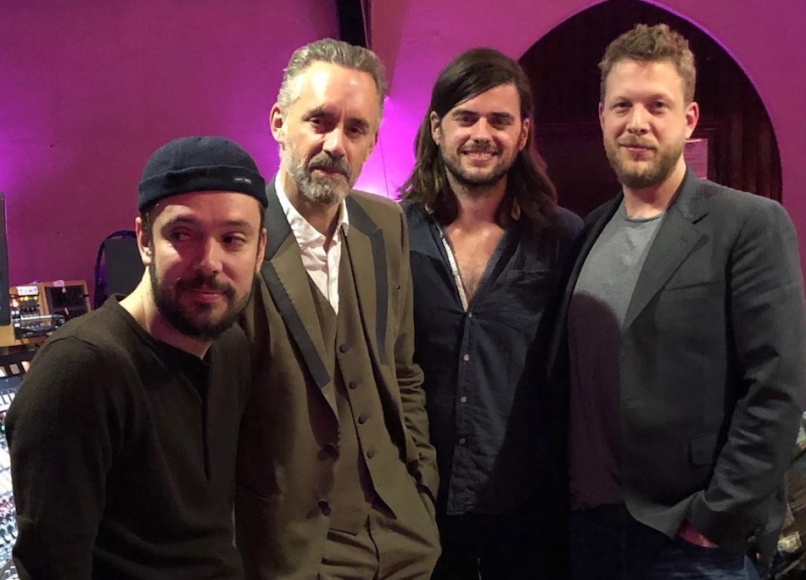 Jordan Peterson with Mumford and Sons in studio, photo via Instagram

Canadian professor of clinical psychology Jordan Peterson has stirred a lot of controversy over the last few years for his opinions on political correctness. His well-articulated views on feminism, gender identity, and white privilege have made him a favorite of the far right, which of course makes him a figure of scorn by the left. Because of this, a recent photo Peterson posted of himself in studio with Mumford and Sons has raised some eyebrows across the Twitterverse.

The Instagram photo actually dates back to May, but only recently made the rounds on Twitter. Mumford fans and haters alike are using the image to connect Peterson’s views to the band’s, with some threatening to never listen to them again for appearing to support him.

With Mumford and Sons at their London Studio

Peterson has expressed a refusal to acknowledge gender-neutral pronouns, calls white privilege a “Marxist lie,” and argued for “enforced monogamy” to reduce male violence. He’s often spoken against the idea of “social justice warriors;” has quoted the popular sentiment, “Islamophobia: a word created by fascists and used by cowards to manipulate morons;” and once stated, “I don’t think women were discriminated against, I think that’s an appalling argument.” Despite all this, he labels himself “a classic British liberal” (via The Guardian).

In response to a New York Times profile that he felt painted the professor in an unfair light, Sean Ono Lennon posted a video in which Peterson makes statements such as, “If you want to eliminate the differences between men and women sexually at the workplace, you have to constrain the sexual differences.” His argument was that perhaps forcing everyone to wear the same uniform to work would prevent the sort of incidents of sexual misconduct that led to the #MeToo movement.

Take a look at that video below, and form your own opinion about Peterson. Consequence of Sound has reached out to representation for Mumford and Sons, and will update this story should they respond.

For anyone who may have been disoriented by the rather disappointing ‘profile’ of @jordanbpeterson by @NellieBowles for the @nytimes here he speaks with startling clarity in the UK: https://t.co/oXs75uFhAU @EricRWeinstein @CHSommers @RubinReport