"This is what the music community is all about" 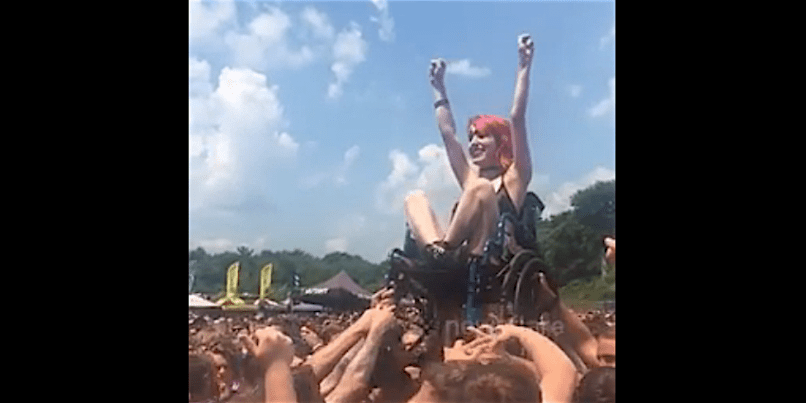 It’s hard to believe, but the Warped Tour as we know it is officially over. Yesterday (Aug. 6th) in West Palm Beach, Florida, marked the final stop on the last-ever Warped Tour, which traveled North America for 24 years since launching in 1995.

Punk-rock veterans Pennywise had the honor of performing the last set and, ultimately, the last song ever on Warped Tour, playing the fitting “Bro Hymn” to close out the traveling festival’s final run.

But perhaps the true highlight of the last-ever Warped Tour took place about a week earlier at a stop in Mansfield, Massachusetts, on July 27th. Video obtained by Newsflare shows concertgoer Carrie Brum, in her wheelchair with her arms raised in the air, being carried across the crowd leading her up to the front of the stage as the band Ice Nine Kills played the last song of their set (watch below).

What’s so poignant about the moment is that it captured the true spirit of Warped Tour. Hundreds upon hundred of bands have played the festival over the years, with some big-time acts owing major thanks to Warped Tour for helping them breakthrough to superstardom. But ultimately Warped Tour was always about the fans, as it brought together kids from different backgrounds to celebrate their love of punk rock, emo, metalcore and more.

Carrie Brum and the fans who helped her across the crowd represent everything that was right about Warped Tour. Brum herself is a singer in a band called Sunsinger. The band posted about the moment on Facebook, stating, “This is what the music community is all about. We play to make others happy, to share our stories, to become a family. Our Vocalist Carrie managed to crowd surf this year at Vans Warped Tour this year in her wheelchair. Being able to surf the crowd after years of not being able to enjoy the feeling was amazing! Ice Nine Kills fans managed to crowd surf her all the way across the crowd to the front!”

Thanks for the memories, Warped Tour. While it may not longer exist as a traveling festival in the future, we imagine that founder Kevin Lyman has some big things planned under the Warped name in the coming years.