From Radiohead to The White Stripes, it's been a wild ride with Team Coco 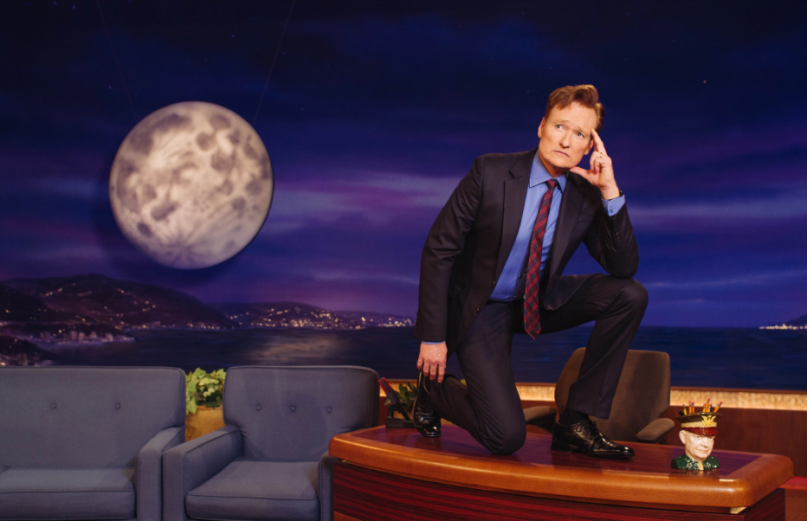 Starting January, Conan O’Brien’s TBS late-night show will slim down to half an hour. One piece of collateral damage will be the musical performances, as we reported yesterday. Of course, this is a major bummer, seeing how music has been a paramount facet of O’Brien’s series, dating all the way back to his tenure on NBC’s Late Night.

In light of the news, Consequence of Sound, who has consistently reported on all the major late night performances over the past decade, looks back on the best from Team Coco. Some performances have brought tears, others laughs, but all of them have been worth losing sleep over. Check out the list below and let us know your favorites.

Back in 2000, Slipknot weren’t so much a punchline, but a force of nature. So, when they made their network television debut on Late Night with “Wait and Bleed”, the performance didn’t just turn heads, it twisted them. Clearly amused, O’Brien would go on to book ’em multiple times in the ensuing years, and their appearances would eventually influence his writers to dream up the brilliant Slipnutz sketch. The band loved the bit so much, they actually took it on tour. As expected, that idea didn’t go over so well with their fans.

When O’Brien moved to TBS in the Fall of 2010, he was coming off a whirlwind summer, one that saw him touring the country after he was legally prohibited from being funny on television following his resignation from NBC’s The Tonight Show. His inevitable return was louder than ever, though. He called up his ol’ pal Jack White and the two broke in his new stage with a hip-shaking cover of Eddie Cochran’s “Twenty Flight Rock”, which they had been performing that entire summer. Whole thing worked like magic.

08. At the Drive-In Perform “One Armed Scissor” on Late Night

Everyone always points to At the Drive-In’s vicious Letterman performance, but Conan had the guys on two months beforehand. Besides, they brought just as much energy here on NBC as they did two months later on CBS. Granted, Cedric Bixler-Zavala and Omar Rodriguez-Lopez’s stage antics are a little old hat these days, but on that Halloween night in 2000, their energy was indescribable. It also came at a time when music was in the pits: nu-metal was all the rage and punk rock hit the mall. This was primal.

07. No Doubt Performs “Just a Girl” on Late Night

Tragic Kingdom was everything in the mid-’90s. Roller rinks, birthday parties, school dances, Spring flings, you name it, Gwen Stefani’s sugary voice was there. But for many, No Doubt’s network television debut on Late Night was their first chance to see what these California rockers were all about, at least beyond their tongue-in-cheek music videos. And thanks to Stefani’s ADHD acrobatics, most asshole rockists who had written them off as mall pop ate crow that night before bed. Who could have ever predicted Stefani would come back not as a guest, but an employee … for NBC’s The Voice.

Seeing how Max Weinberg was Conan’s drummer all those years, it wasn’t too jarring seeing Bruce Springsteen drop stop by Late Night every so often. The most lively hangout came in 2006, when The Boss was hot off his Seeger Sessions tour. Each night on that run, he’d send crowds home with “Pay Me My Money Down”, and naturally, Springsteen brought that magic to Conan, roping in guest Thomas Hayden Church and eventual successor Jimmy Fallon. It was the type of performance primed for The Tonight Show, proving Conan was more than ready for the gig as early as the mid-aughts.

It’s fitting that Radiohead would serve as Conan’s first musical guest. Looking back, the two are arguably the most subversive names in their respective fields of that era, and you can see hints of their early genius in this clip. “My next guest has taken self-loathing and raised it to an art form,” O’Brien says, holding a copy of Pablo Honey. “We offered them several images to play in front of, and they chose … really slow cars.” Little did he know he was describing what would become his own trademark humor.

While not exactly a musical performance, this list just wouldn’t be right without David Bowie. The Thin White Duke was a frequent guest of Conan’s and the two would often indulge in a little irreverent humor by doing impersonations or singing random songs or talking about absolutely nothing. When Bowie passed in 2016, Conan assembled this incredible tribute, which features some of the best bits involving the late night host, particularly when he “busts his G string” as the Starman sings “Space Oddity”. Hopefully these moments are a preview of how music can still factor into the show’s future.
__________________________________________________________

Even Conan has to announce how big of a get this was for him: the Queen of Soul Aretha Franklin. Performing her 1985 Grammy-winning smash “Freeway of Love”, Franklin came to Late Night with a crowd, to say the least, surrounding herself with over a dozen musicians, from a brass section to multiple backup vocalists. Hell, they even made room for a grand piano! It’s a spectacle and one that goes on for a whopping seven minutes, but it’s worth every second, oozing with soul and volume like few late night performances ever do. By the end, Conan can only bow.
__________________________________________________________

02. The White Stripes Perform For the Last Time on Late Night

“When we were trying to decide out which musical act to feature on the last show after so many years there was one band that was always on the top of my list,” Conan says. “I wasn’t sure this could happen. I am personally very thrilled this could happen this evening. Please welcome our good friends for many years, the White Stripes.” Looking back, not even Conan could have known this would be the last outing between Jack and Meg White, but, here we are, nearly a decade later, and history reveals this remains the final performance of The White Stripes. Not a bad way to bow out–for the band or Conan.

All eyes were on Conan O’Brien that January in 2010. Less than a year after he took over The Tonight Show from Jay Leno, NBC was already trying to find a way to finagle Leno back into the picture. As history shows, things didn’t go over well and O’Brien signed his resignation, leaving the chair once again for The Chin, who would keep it warm for a few more years before Jimmy Fallon came into the picture. Nevertheless, O’Brien’s last two weeks at The Tonight Show warranted some of the greatest moments in the history of the medium as everyone got a chance to see this feud go public.

It all ended, though, with “Freebird”, a song so ubiquitous with grand finales that it’s become a rock ‘n’ roll joke at this point. But that night, despite Will Ferrell’s boisterous appearance as a Southern middle-aged crooner, it wasn’t funny. Instead, it was an incredibly emotional finale to a wild and out of control two weeks of unorthodox entertainment, and it’s all over O’Brien’s face. You can see the weight of the situation course through his mind as he tearfully says goodbye and you can see it as he storms through Lynyrd Skynyrd’s iconic ballad, capping off nearly two decades with the network.