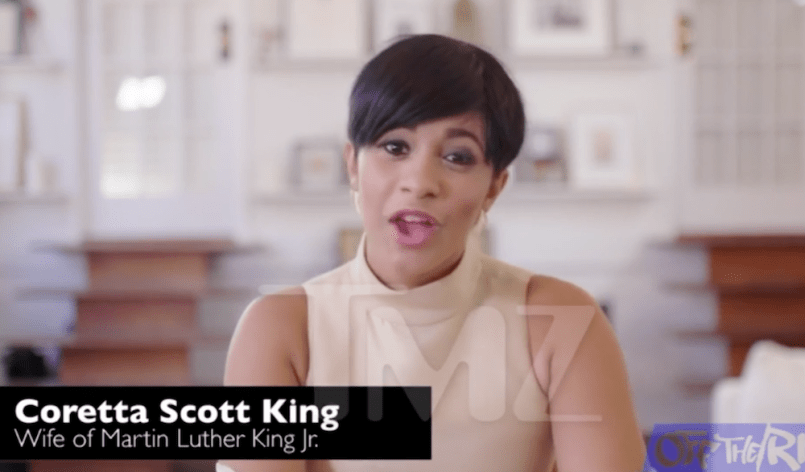 Cardi B as Coretta Scott King in Off the Rip skit

If those Young Cardi memes prove anything, it’s that Cardi B has flaunted a colorful, larger-than-life personality since she could walk. That boldness shines throughout her breakthrough debut, Invasion of Privacy, and now it appears she’ll be sharing some of it on TV, too.

The Bronx-born artist is set to appear in multiple skits on Off the Rip, an upcoming sketch comedy show from Wild ‘N Out star Rip Michaels. One of those skips is called “Real Housewives of the Civil Rights” and sees Cardi playing the role of Coretta Scott King, wife of Martin Luther King Jr.

A riff on Bravo’s popular Housewives series franchise, the segment features Cardi’s King character hanging out with “Rosa Parks” and the “wives” of Jesse Jackson and Malcolm X. There’s also a woman described as the “Iggy Azalea” of the Civil Rights Movement. Together, they all gossip about MLK, including his many so-called mistresses, at which point Cardi says, “All these hussies wanna sleep with my huuusband!”

Apparently the theme music for this skit is “A Thousand Miles” by Vanessa Carlton, which might actually be the best part of the whole thing. Watch it below via TMZ.

Not surprisingly, the skit hasn’t been received well by MLK’s family. Dr. Bernice King, the youngest of MLK and Coretta Scott King’s children, has harshly criticized the segment, calling her mother’s portrayal “repulsive” and “false.” She also said the skit’s release is poorly timed — today marks the 55th anniversary of MLK’s March on Washington and “I Have a Dream” speech. According to TMZ, she would like to have a “face-to-face” talk with Cardi about the skit. Update: According to King, Cardi already reached out “apologizing for the skit.”

Off the Rip is believed to be airing on MTV (longtime home of Wild ‘N Out), though a timeline for its premiere has yet to be revealed. In addition to the “Housewives” skit, Cardi is also expected to partake in one called “How to Treat a Man Wrong” and “Ho Etiquette”, the latter of which has already received some backlash for its racist jokes. There’s also one about Cardi and Nicki Minaj’s longstanding beef. At least some of these were supposedly filmed three years ago.

“You’re going to see Cardi B in a whole new light,” Michaels told Page Six last week of the show. “When I tell you, Off the Rip, we touch on everything. There is no sacred cows. We touched on Nicki Beef, we touched on 50 Cent, we touched on a whole bunch of people that you just wouldn’t expect us to talk to. We gon’ need bodyguards after this show.”

Over the weekend, Cardi made her live comeback, making a surprise cameo during Migos’ concert at Madison Square Garden. She also recently released the music video for her Kehlani collaboration, “Ring”.