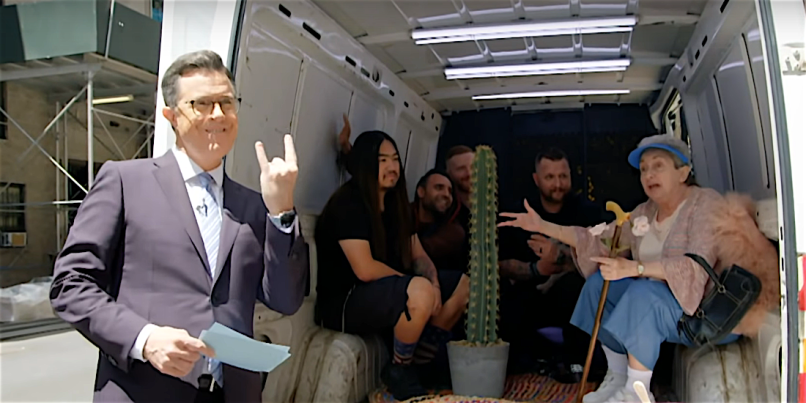 What started out as a joke back in the spring ended up with a veteran nu-metal band getting a new tour van from Stephen Colbert on Friday night’s episode of the Late Show.

In a March episode, Colbert poked fun at President Trump’s idea to crowdsource money to build a border wall by comparing it to Flaw’s actual GoFundMe campaign to raise $15,000 to buy a new tour van so they could make it to their gig at Spicoli’s in Waterloo, Iowa.

Despite the national exposure, Flaw never quite reached the goal, or as Colbert put it, “After that shout out from me, you the Late Show community stepped up and agreed that you don’t care if Flaw needs a van.”

Colbert even mentioned Flaw’s campaign again in a subsequent episode while telling a joke about Amazon founder Jeff Bezos, but, alas, the band still remained a thousand bucks short of their goal.

So, Colbert did the honorable thing, and just went out and bought a Flaw a van, as documented on this past Friday’s episode. He invited the band to New York City, where he helped them decorate the vehicle to make it look a little more metal.

What Colbert deemed as metal were some fluffy throw pillows, a bean bag chair, a kitten, a litter box, a Roomba, a cactus, and, wait for it … a real-life elderly mom, who treated the band to a rendition of “Splish Splash, I Was Taking a Bath.”

Other items included a sock to put on the door handle for when the “van’s a-rockin'” and a misspelled band decal for the side of the van. The segment ended with Colbert hilariously trying to christen the van with a bottle of champagne.

But that wasn’t all, Colbert also appears in the band’s music video for their single “Conquer This Climb,” featuring the late-night host headbanging and throwing horns up as Flaw rock out in front of their new van.