Cohen reportedly appeared as a disabled war veteran for the Who is America? interview 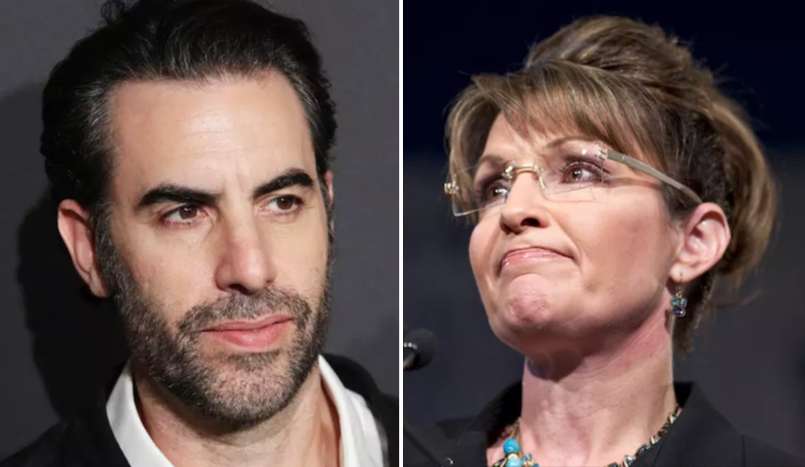 Another of Sacha Baron Cohen’s targets for his upcoming Who is America? series has been revealed, and she’s pretty pissed about it. Former republican vice-presidential nominee Sarah Palin has said she was “duped” by Cohen in what she calls a “truly sick” prank interview.

Responding to a tweet by Drudge Report chief Matt Drudge in which he revealed Cohen targeted all sides of the political spectrum, from Dick Cheney to Bernie Sanders, Palin confirmed she’d had an encounter with a man she now assumes was the comedian. She said she had “fallen victim to the evil, exploitive, sick ‘humor'” of Cohen when she traveled across country with her daughter to meet with a wheelchair-bound war veteran. (Whether that daughter was Bristol, Willow, or Piper is unclear.)

“Out of respect for what I was led to believe would be a thoughtful discussion with someone who had served in uniform, I sat through a long ‘interview’ full of Hollywoodism’s [sic] disrespect and sarcasm – but finally had enough and literally, physically removed my mic and walked out, much to Cohen’s chagrin. The disrespect of our US military and middle-class Americans via Cohen’s foreign commentaries under the guise of interview questions was perverse.”

She went on to challenge both “shallow Sacha boy” and CBS/Showtime to air what she assumes will be the “heavily edited, not pretty” footage, but to “donate all proceeds to a charitable group that actually respects and supports American Vets.” (It’s worth noting that a premium channel like Showtime wouldn’t actually get direct proceeds from a single show, as it’s subscription based.) “Mock politicians and innocent public personalities all you want, if that lets you sleep at night, but HOW DARE YOU mock those who have fought and served our country,” she added. “Truly sick.

After claiming the production team “purposefully” took her and her daughter to the wrong airport, forcing them to miss their flights back to Alaska, she concluded with a final note to Cohen: “By the way, my daughter thinks you’re a piece of ****, Sacha.”

Read her full statement below.

Who is America?, is a seven-episode interview series Cohen has been secretly working on over the last year. Premiering July 15th at midnight EST, the show “will explore diverse individuals, from the infamous to the unknown across the political and cultural spectrum, who populate our unique nation,” according to Showtime. Trump University is apparently one target, as is Dick Cheney, who, as revealed in a teaser, actually had the gall to sign a “waterboard kit” on camera.