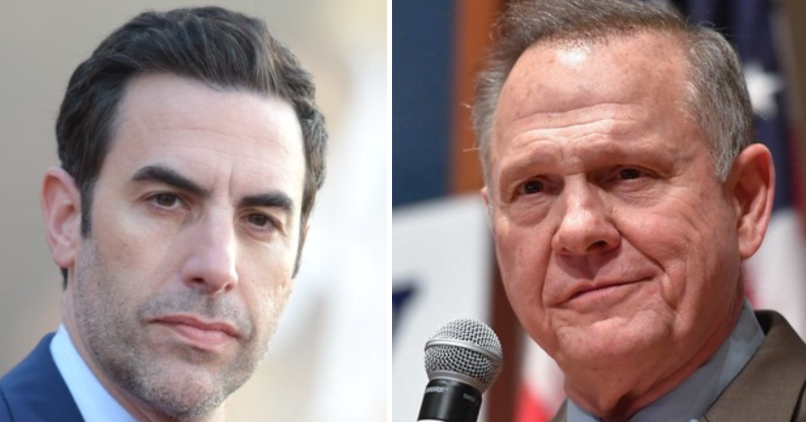 As news of Sacha Baron Cohen’s secret new TV series spreads, more and more political scum are realizing that they too were duped by the comedian.

The exact premise of Cohen’s Showtime series, set to premiere this Sunday, remains a mystery. But what we do know is that he’s been interviewing various hacks, pundits, and even a former vice president in disguise as a new character he’s created.

Sarah Palin was one of Cohen’s victims, as she herself revealed earlier this week. As Palin tells it, she and her daughter traveled across the country for what they presumed was a “legit opportunity” to honor American veterans and contribute to a “legit Showtime historical documentary.” She was greeted by a man in a wheelchair, presumably Cohen, who identified himself as a veteran and proceeded to conduct “a long interview full of Hollywoodism’s disrespect and sarcasm.” Cohen, in character as Dr. Billy Wayne Ruddick Jr., shot back on Twitter today, saying he never told Palin he was a war vet, but rather a veteran of “United Parcel.” He added, “I do believe you have been hit by a bullshit grenade and are bleedin’ FAKE NEWS.”

Now, Roy Moore has revealed too was duped by Cohen. The accused child molester, who unsuccessfully ran for senator in Alabama last year, claims he was invited to Washington, DC in February to receive an award for my strong support of Israel. “I did not know Sacha Cohen or that a Showtime TV series was being planned to embarrass, humiliate, and mock not only Israel, but also religious conservatives,” Moore said in a statement. It’s worth noting that Cohen is Jewish.

He goes on: “I don’t need Sacha Cohen to tell me who America is,” adding, “As an American, I would never hide my identity and deceive others only to mock and ridicule them as this Showtime series is designed to do.” Child molestation is apparently OK, however.

Moore closed his statement by threatening to sue Cohen and Showtime if they air the “defamatory attack on my character,” adding, “It’s been a long time since I fought for my country in Vietnam. I’m ready to defend her again!”

Roy Moore says he was duped by Sacha Baron Cohen for his new CBS/Showtime series & threatens legal action "If Showtime airs a defamatory attack on my character…" pic.twitter.com/ovQjdXGyjw

Former congressman turned conservative radio host, Joe Walsh, said he was also invited to Washington, DC to participate in an event honoring Israel. “I sat down and we started talking pro-Israel stuff, Israeli defense, and then out of left field the interviewer starts talking about how children should defend themselves against terrorist attacks,” Walsh recalled. Walsh also shared a picture of the award he was given.

I was invited to a pro-Israel dinner that honored defenders of Israel. The producers said they needed to film a pre-interview that would air as a part of Israel’s 70th birthday celebration. #BoycottShowtime

@SachaBaronCohen's cronies said that Tony Blair, Rupert Murdoch, Bono and Steven Spielberg had also been honored – I flew to D.C., producers booked me a hotel room, paid for by: Daniel Nuzzi #BoycottShowtime pic.twitter.com/8upPN54Pne

I was rushed to the studio, production was a mess, I sat down and we started talking pro-Israel stuff, Israeli defense, and then out of left field the interviewer starts talking about how children should defend themselves against terrorist attacks. #BoycottShowtime pic.twitter.com/kdwA0h9VyR

And just like that producers rushed me out of the studio as an apparent fight broke out. Strangest interview of my life – don't think they spoofed me very much – but I did get this award, thanks @showtime. #boycottShowtime pic.twitter.com/yTZcxTww6O

We also know from the show’s teaser trailer that former vice president Dick Cheney was interviewed — and even autographed a waterboard kit. Presumably many more victims will be revealed when the show premieres Sunday at 10pm on Showtime.