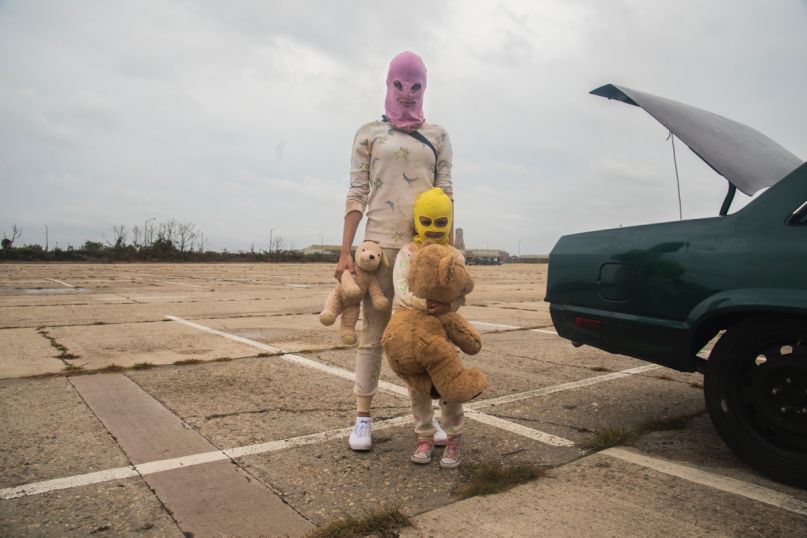 It ain’t over ’til the Russian hunks dance and kiss: Pussy Riot has returned with a new single and video following Sunday’s on-field protest at the World Cup final in Moscow. The catchy new wave track is titled, “Track About Good Cop”, and comes riddled with references from their recent political statement, “Policeman enters the game,” which contrasted the differences between a “heavenly policeman” and the “earthly policeman.”

Both the song and video brings that juxtaposition to life with dizzying colors and plenty of Russian hunks. Humorously credited to Russia’s Ministry of Internal Affairs, the clip features Russian cops dancing in the snow, all while the group sings about a would-be world filled with “boys and girls” and “sugary streets,” where “cops are kissing under the clouds.” Hopefully this won’t make life harder for the four women who rushed the field on Sunday. The four Pussy Riot members already received 15-day prison sentences and three-year bans on attending sporting events. Watch below.

In related news, Pussy Riot have won their case against the Russian government in the European Court of Human Rights. On Tuesday, the court condemned Russia for its treatment of the band following their now-iconic 2012 protests at a Moscow cathedral, which saw members Maria Alyokhina and Nadezhda Tolokonnikova incarcerated for nearly two years. As the BBC reports, the court determined that Russia violated five articles of the human rights convention, referencing the band’s “overcrowded conditions” during transportation, the “humiliation” of their trial in a glass dock, their extended detention before trial, lack of access to a lawyer, and freedom of expression for banning access to their videos.

According to Reuters, the court has ordered Russia to pay a total of 48,760 euros in damages and judicial expenses. Although the court “accepted that a reaction to breaching the rules of conduct in a place of religious worship might have been warranted,” they argued: “that sentencing them to imprisonment for simply having worn brightly colored clothes, waved their arms and kicked their legs around and used strong language, without analyzing the lyrics of their song or the context of their performance, had been exceptionally severe.” Currently, Russia’s Justice Ministry insists the ruling has not yet taken effect and that they have three months to decide if they want to appeal.

Hell of a week for Pussy Riot.