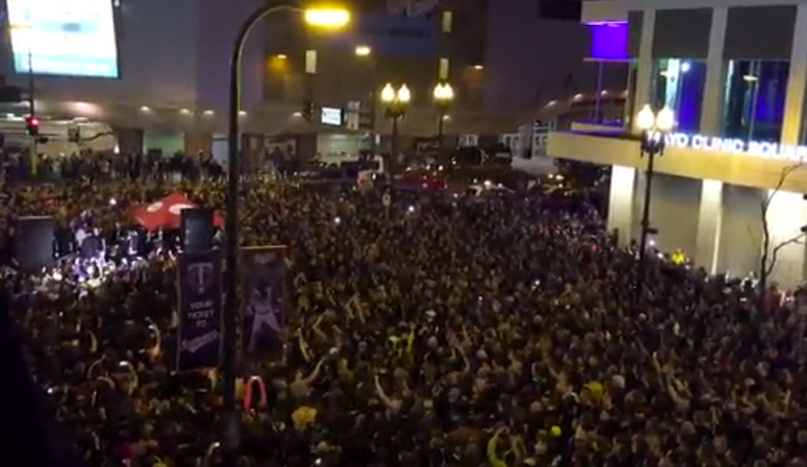 Mere hours after the passing of Prince, thousands of fans gathered in downtown Minneapolis to pay homage to the funk icon with a massive “Purple Rain” singalong. As with any event of this magnitude, video footage and photos were immediately shared far and wide via social media by those in attendance celebrating Prince’s life and mourning his death.

Despite these harmless intentions, Universal Music, which owns rights to “Purple Rain”, has taken action against one of these videos, filmed by Star Tribune reporter Aaron Lavinsky. According to Universal, the footage violates the Digital Millennium Copyright Act of 1998 (DMCA).

As the Star Tribune-owned City Pages notes, the copyright law allows “intellectual property owners who believe their copyright is being infringed to file a takedown notice with an internet service provider or a website hosting the content. If the ISP or site immediately removes the content, they can’t be sued.” Twitter, where Lavinsky’s video was originally hosted, has since pulled the footage, presumably to avoid a lawsuit.

“This is very disturbing: Universal Music filed a DCMA takedown on a video I shot of thousands of Prince fans singing Purple Rain the night of his death,” Lavinsky commented in a tweet this week. “This was clearly fair use and UMPG and Twitter are in the wrong.”

This is very disturbing: Universal Music filed a DCMA takedown on a video I shot of thousands of Prince fans singing Purple Rain the night of his death. This was clearly fair use and UMPG and Twitter are in the wrong. https://t.co/FOSlPdCqV7

Lavinsky and Star Tribune appear to have a strong case in arguing fair use. The DMCA, which “bars the unlawful reproduction, distribution or performance of copyrighted Works,” was originally passed in order to help curb online peer-to-peer file sharing, such as on platforms like Napster. It’s hard to see how Lavinsky’s 2016 “Purple Rain” singalong news footage falls under this scope.

Additionally, per the US government’s own Copyright website, the fair use standard can often excuse material that’s used for factual work, noncommercial purposes, or nonprofit educational purposes. In fact, the website even lists “a news item” as one of the potential examples of fair use.

It’s unclear whether the Star Tribune will fight the DMCA takedown, but as they point out, content creators have successfully done so in the past — in particular, creators of music-filled viral videos.

We’ve reached out to representatives of both Prince’s estate and Universal for comment.