English rockers return with plenty of surprises and renewed energy

by Kevin McMahon and Heather Kaplan 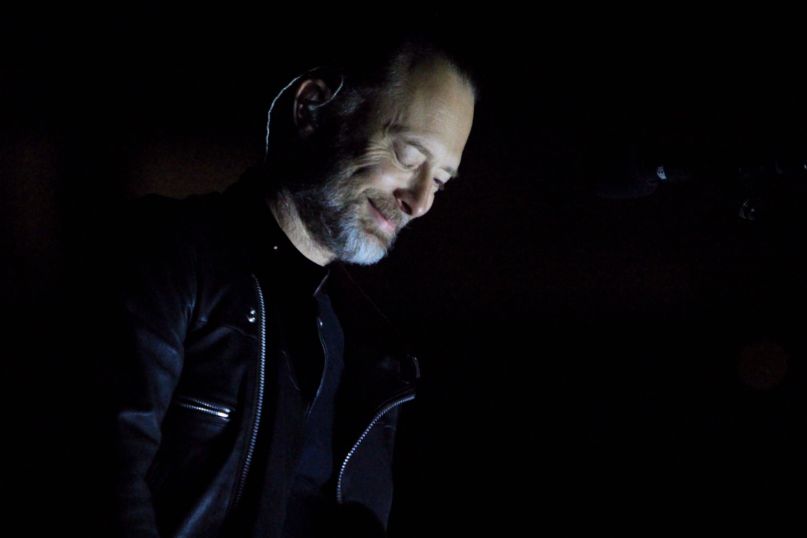 Setting The Stage: Descending upon any Radiohead concert is like entering a vortex. Once a certain radius to the venue is breached, the palpable tenor of all things Radiohead is undeniable—the earnest anticipation, the fandom measuring, the few-decibels-too-loud-pseudo-intellectual debates, and, of course, plenty of quiet respectful folks just trying to see their favorite band—it’s all part of the ceremony.

Being the opening date on 2018’s North American tour, senses were heightened to a fever pitch, and the Radiohead faithful were rewarded with a picturesque summer evening in Chicago. Yorke and company have been in the giving mood with their tour behind 2016’s A Moon Shaped Pool, submitting nearly 30 shows a year since 2016 to their parishioners.

Signs point to a band that understands they’re in the waning years of their touring lives, but have only just begun to truly enjoy it. Yet, as the the splotched, Oxfordshire worn AMSP artwork striping the United Center’s outer walls came into view, Radiohead’s elusive ability to make things feel new remained unquestionably intact.

Taking the Stage: The evening opened with the subtle billing of Shye Ben Tzur’s excellent Rajistan Express, which tours eponymously under Junun, their 2015 project with Greenwood. As soon as Junun left the stage, Radiohead’s army of production staff scuttled back and forth to make the final calibrations for the evening’s selections.

Radiohead emerged as they always do, without fanfare, and launched straight into the opening notes of “Daydreaming” as if it were a dare, with Yorke looking out to the crowd to assure they were indeed ready to dive in head first. An immediate hush was sucked out of the 23,000+ capacity crowd, Yorke smirked, and off they went.

The band quickly followed with two more AMSP cuts, “Desert Island Disk” and “Full Stop”, and the energy in the room hinted that perhaps both band and crowd had a few cobwebs to shake off before attaining the magic Radiohead shows are known for. Yet, as “Morning Bell” slid into “Myxomatosis”, Yorke ripped off his leather jacket to reveal an ensemble somewhere between urban casual and a pirate deckhand, and immediately flipped the switch, delivering a forceful rendition of the Hail to the Thief favorite.

That One Song: Deepest of the cuts to appear in the nearly 25-song set was “Blow Out”, which had been on the shelf since 2008. The Pablo Honey standout received a modern update by way of giant psychedelic projections on the hovering elliptical at the back of the stage and the decidedly more ghoulish timbre Yorke’s voice has assumed in the 25 years since its release.

The standout performance of the evening, however, was a heartbreaking rendition of “How to Disappear Completely”, an ageless song that Yorke himself once named “the most beautiful thing we’ve ever done.” Honorable mentions go to “Pyramid Song”, “Decks Dark” (despite the lyrical slip), and the closer “There There”, which sent the crowd into the night with bone splitting guitar riffs and the a shining example of how phenomenal song writing can translate to the stage.

A Perfect Storm: It’s what Radiohead have always been. A once in a generation band that has been together since grade school, rode waves of musical trends, broke them, created them, and continually thrust forward, lampooning potentially the last freckle in time when limitless resources could be sustainably amassed by an eclectic minded Rock Band.

With the merry-go-round of guitars, synthesizers, modular boards, pianos, and otherworldly effects that go into each arrangement of a live track, these resources and their attached clergy of technicians cannot be understated, especially when discussing the pristine renditions of deep cuts that continue to keep their live shows from growing stale.

Encore 2:
Blow Out (Tour debut; first time live since 2008)
No Surprises
There There