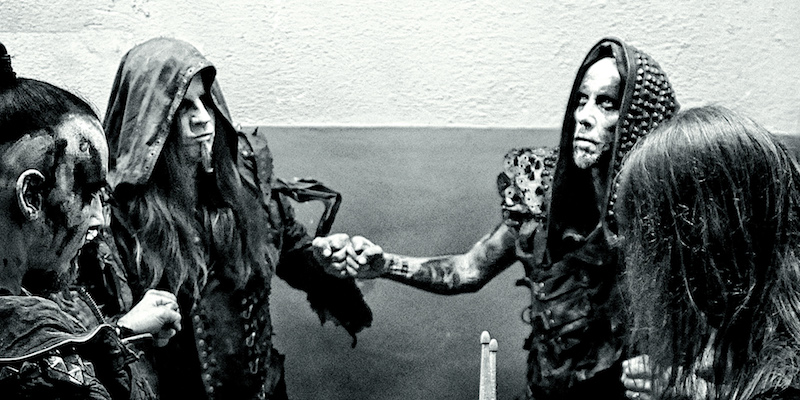 The trek, dubbed the “Ecclesia Diabolica America 2018 e.v.” tour, will be in support of Behemoth’s upcoming 11th album, due out this fall. The extreme metal act recently supported Slayer on the spring North American leg of the thrash legends’ ongoing farewell tour, but frontman Nergal is excited for his band to keep trekking stateside this fall.

“I hereby announce Behemoth’s triumphant return to the North American shores this fall,” declares Nergal. “We will be in the noble company of At the Gates and Wolves in the Throne Room, who will be supporting us on our 11th opus.  Even though it’s only been a few moments since we played for you, our American legions, we cannot wait for this tour to start! It’s gonna be the first headlining run supporting new music and we are bringing all the artillery, which means the biggest production thus far! ‘Ecclesia Diabolica America 2018 e.v.’ arrives soon and we WANT you to celebrate this sonic pandemonium with us!”

At the Gates, whose brand of melodic death metal in the early ’90s had a major influence on the metalcore scene to follow, will be serving as an opening act for the first time in more than two decades.

“At the Gates have not done a support tour since 1996,” explains frontman Tomas Lindberg. “When we got invited to this tour, we immediately saw the logic to the package. This is three bands with their own unique sound, three bands totally dedicated to finding the core of their art. Three important bands. It all made sense to us, and we are flattered to be part of this. I truly believe that this is THE ONE tour not to miss this year. Get ready to drink from the night itself together with us.”

The tour kicks off Oct. 20th in Phoenix, Arizona, and wraps up Nov. 24th in Los Angeles. A complete list of dates can be seen below. Grab tickets here.