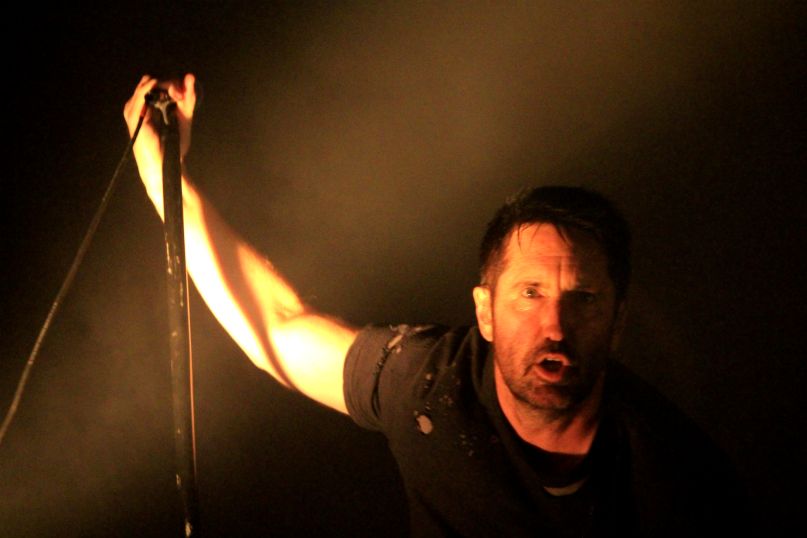 Today marks the release of Nine Inch Nails’ Bad Witch, the third in a trilogy of releases that began in December 2016 with Not the Actual Events and continued in July 2017 with Add Violence. Subscribers of Apple Music and Spotify can stream it below.

The EP (oops, sorry, “album”) was clearly inspired by Trent Reznor’s bleak outlook in regards to American culture and politics, the likes of which he’s discussed in a number of different interviews. Speaking on how Bad Witch‘s themes relate to the previous releases in the trilogy, Reznor told The Guardian, “We aren’t these enlightened beings, here to take care of each other and think about our benevolent role in the universe as protectors and creators – we’re just a fucking mutation and an accident,” he says of the thoughts that inspired these new songs. “I think you’re seeing the fall of the empire of America in real time, before your eyes; the internet has eroded the fabric of decency in our civilisation.”

Along the way, he’s also found time to praise Donald Glover and slam the likes of Taylor Swift, Kanye West, and, of course, our “imbecile” president. Live, the band’s not only unveiled Bad Witch’s “God Break Down the Door”, but also covered David Bowie and Joy Division.

(Ranking: Every Nine Inch Nails Album from Worst to Best)

In addition to a slew of festival dates this summer, Nine Inch Nails have also announced an expansive North American tour. Kicking off in September, the “Cold and Black and Infinite” tour features The Jesus and Mary Chain in a supporting role, as well as guest spots from the likes of The Soft Moon, Tobacco, and Kite Base. See the full list of dates below. You can grab tickets here.