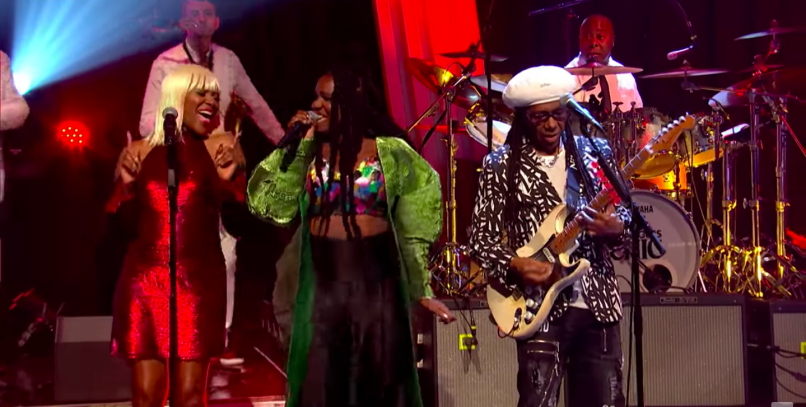 It’s been more than 25 years since we last got an album from the funk legends of Nile Rodgers and Chic. Forgive the pun (or don’t), it’s about time for It’s About Time, the group’s new record which was officially announced this week after numerous delays. The album arrives September 7th, and the band gave us our first taste this week during an appearance on Later… with Jools Holland.

Rodgers and Chic performed a track called “Boogie All Night” alongside collaborators NAO and Mura Masa. The grooving song is evidence that Rodgers is still a master at bringing the funk, especially when working with modern artists. “I’ve had the great privilege of producing some of the greatest artists in the world so when it came time to collaborating for my own record the barometer was shall we say pretty high,” Rodgers told Rolling Stone of the song. “Nao, Mura Masa and Cosha were important to me and to be able to debut the songs we wrote live with them on Later… With Jools [Holland] before we’ve even put out recorded versions makes it even more special.”

Check out the premiere of “Boogie All Night” below.

Mura Masa and Cosha also feature on what will be the first official single from It’s About Time, a track called “Till the World Falls”, which also boasts Anderson .Paak and Vic Mensa. It’s expected to debut on June 22nd.

As Rodgers told V Magazine, Hailee Steinfeld also serves up some guest vocals on the record. “It’s actually one of my favorite songs on the album, because between the guitar and her voice, at a certain point when we break down, it’s ridiculous,” Rodgers said of Steinfeld’s contribution.

Earlier this year, Rodgers hinted at even more contributors, telling Pitchfork Radio that he’d been in the studio with Bruno Mars, British R&B singer/rapper Craig David, and Blondie’s Debbie Harry. At the time, he also said he planned on recording with HAIM, going so far as to say the two groups had challenged each other to a battle of the bands. “For the next two years, whenever you see Haim doing a live show and you see Chic doing a live show… just see if either of the two bands winds up playing with the other one,” he teased.

V also got the premiere of the album art for It’s About Time, which is an update of the cover of their 1977 self-titled debut. Take a look below.

We talk to @CHICorg frontman @nilerodgers on the band's first album in 25 years, and the familiar yet futuristic album cover, debuting exclusively on V. https://t.co/eJfWXW9ERl pic.twitter.com/KWg0z2bl0G