A surprisingly brisk, well-shot studio comedy that makes the most of its high concept 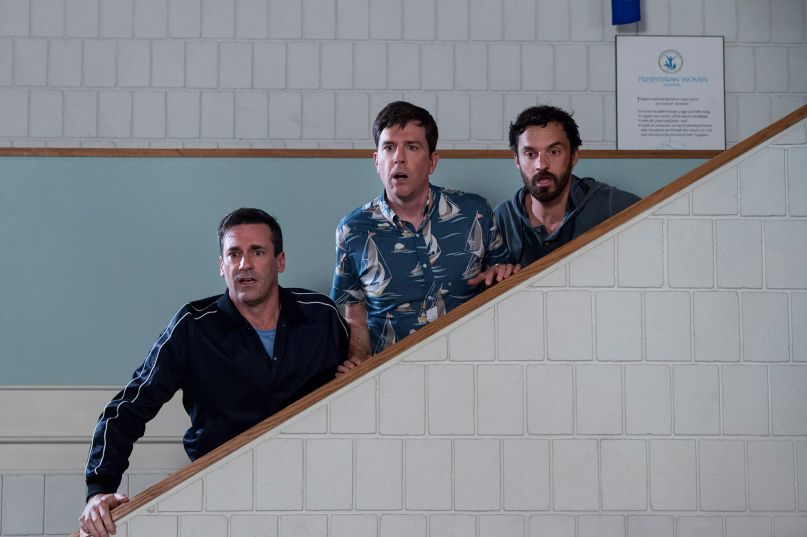 In 2013, The Wall Street Journal published an extraordinary human interest piece about a group of ten middle-aged men, friends since childhood, who stayed close chums through years of movement, jobs, marriages and children. All it took was one simple rule: they would reserve one month a year for continuing the same game of ‘tag’ they’ve been playing since adolescence. Even in their 40s, these men remained committed to the game, taking increasingly extravagant measures to tag each other – dressing up in disguises, flying across the country, roping in wives and friends as accomplices, turning a backyard game into something akin to high espionage.

If it sounds like a pitch right out of a raunchy, 21st-century bro comedy, Warner Bros. thought so as well. With Tag, screenwriters Rob McKittrick (Waiting…) and Mark Steilen, along with first-time director Jeff Tomsic, manage to mine considerable charm out of an inventive premise, and strike gold with a fun cast of near-A-listers.

For the film adaptation, the gang is whittled down to five – the four that Tag primarily follows include dweeby ringleader Hoagie (Ed Helms), buttoned-down business bro Bob Callahan (Jon Hamm), jittery burnout Chilli (Jake Johnson), and the quixotic, scatterbrained Sable (Hannibal Buress). The fifth, of course, is Jerry (Jeremy Renner), a hulked-out, quick-witted, and endlessly committed die-hard who “may be the greatest player who ever lived.” Jerry’s never been tagged in their 30-year history with the game, and threatens to retire for good once he gets married to his fiancée Susan (Leslie Bibb) at the end of the target month. To that end, the gang – along with Hoagie’s intense wife Anna (Isla Fisher) and a Wall Street Journal reporter named Rebecca (Annabelle Wallis) who follows Bob for the story – return to their hometown to finally tag Jerry once and for all.

High-concept comedies like Tag often only go as far as their premise will take them: without a solid foundation, even the best casts are often left to flounder and meekly improvise with each other. Thankfully, Tag recognizes that, and goes all-in on its deeply weird concept; it’s all about tagging Jerry, and the extraordinary lengths the boys (and girls) go through to tag someone who’s almost supernaturally untaggable. Hoagie goes to the trouble of getting a job as a janitor at Callahan’s company, just to get into his office to tag him; later, he dresses up as an old lady in an attempt at intercepting Jerry while he picks up his dry cleaning. (The ridiculous part is that, as the post-credits footage of the real guys attests, some of the more ludicrous stunts in Tag are things that the actual subjects did.)

Obviously, this movie lives or dies in the moments when the gang tries to corner Jerry and tag him once and for all, and it’s here that Tomsic smartly takes on the moody, stylized air of modern action films – time slows down, with Renner’s calculated voiceover anticipating moves and calculating counter-moves like Robert Downey Jr.’s Sherlock Holmes. He flips and jumps like Jason Bourne, effortlessly evading his clumsy friends with superhero-level physicality, a delightfully effective way to elevate this child’s game into something cinematic. Cinematographer Larry Blanford dabbles in the formal language of different genres in neat ways – one particular showdown in the forest outside a country club plays like Raimi-era ‘80s horror, complete with muted colors and fog-shrouded trees. Perhaps it says something about the state of modern comedy, but it’s a relief to see a broad studio comedy taking the time to look good.

Even if Tag weren’t so earnestly committed to its conceit, it’d still be a joy to see this game cast of actors bounce off each other. The main cast has some lovely chemistry, each of them playing off their existing star personae – Helms’ earnest goofball, Hamm’s smirking matinee idol, Johnson’s wide-eyed slacker. Even Renner (whose hands and arms are apparently computer animated because of an injury, not that you can notice) has fun in his smaller role, Jerry being a perfect vehicle for his particular brand of smarm. Like everything he does, though, Buress runs away with the entire affair, conjuring up his patented formula of weird, dry wit and pleasant aloofness with every single weird thing that comes out of his mouth. In some ways, he exists alongside the gang, rather than being an active participant, but it works every time.

It’s kind of a shame, then, that the women of Tag sometimes feel like an afterthought. There are some exceptions, to be sure; Fisher is delightful, getting to throw down with the boys in a way that doesn’t sideline her (think Rose Byrne in Neighbors), and Bibb bubbles with a nervous, understanding energy toward her fiancé and her friends. Rashida Jones, sadly, gets less to do as an old flame of Johnson and Hamm’s, who compete for her affections. Then there’s poor Wallis, who’s thanklessly saddled with the role of humorless audience surrogate.

Perhaps that’s the secret to Tag’s surprising success: like the real figures at the center, all the schemes and tricks and traps are just the way these men express their sincere affection for one another. That’s sweet enough, but the way their loved ones also get wrapped up in the game as well makes Tag, as corny as it might sound, a testament to the transformative power of play. In a world where men are often socialized not to touch, it’s ironic that these men would use touch as a way to stay close all these years. It’s a five-way bromance at its core, but it doesn’t forget to wrap other people into its sweet, loving orbit as well.