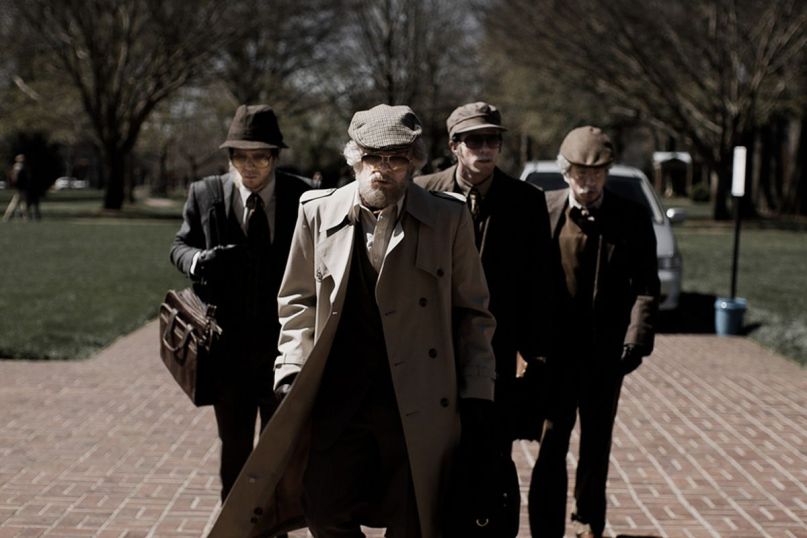 At big moments in life, we know how things are supposed to go. A quarrel with a lover ends with a stirring declaration and a pulse-pounding kiss, maybe in a rainstorm. I love you, you idiot! You’re alone in the dark, no one’s home, and there’s a creaking down the hall. Who’s there? Stop messing around, you’re scaring me! You see an old friend after a prolonged estrangement, and something unspoken passes between you. Been a long time, Howard. Maybe one time in a thousand, that scripted moment actually comes to pass. The rest of the time, life is just life, messy and weird and often pretty flat. Life doesn’t conform to genre, life doesn’t follow the script. We forget it at our peril.

As it happens, sometimes the unscripted makes for a pretty good script in its own right. That’s the delight of American Animals, an engaging heist film that takes great pains to make its origins clear. This isn’t based on a true story. There’s no based-on at all. The young men who stumble through the story are real people, not actors; actors play them, but the real men are present as well. Writer-director Bart Layton nestles a documentary within his narrative feature, or perhaps adds a highbrow dramatic reenactment to his documentary. Whatever you’d like to call it, Layton’s film sees his living, breathing subjects recount their true story, rife with the inaccuracies and contradictions, as a quartet of terrific actors bring that story to dramatic life. And as for the story itself? It’s a mess, as life so often is — but it’s a ripping good yarn all the same.

Spencer (Barry Keoghan) wants to be an artist, but he doesn’t think he’s experienced the requisite pain and suffering to make anything worth seeing. Bored, he kills time with Warren (Evan Peters), a charismatic, somewhat wild friend his parents aren’t crazy about. When Spencer’s art school adventures take him into the rare books room at a library, he becomes fixated on an Audubon volume worth millions. Suddenly he and Warren are planning a fancy-book liberation, a piece of playacting that somehow keeps getting more and more real, especially as would-be FBI Agent Eric (Jared Abrahamson) and “made for success” Chas (Blake Jenner) get involved. They have a heist movie marathon and Google ‘how to plan a heist,’ and script out the perfect plan — complete with Reservoir Dogs code names, old man disguises, an Elvis montage, and a getaway van. Oh, and there’s also the requisite hapless victim, a nice librarian (Ann Dowd) whose humanity the young men try desperately to ignore. But hey, it’s a true story, remember? All does not go to plan, and once lines are crossed, they can’t be uncrossed.

That’s what sets American Animals apart from other heist movies — well, that and the true story element. It’s clear from moment one that this plan is absolutely not going to work, and all viewers should prepare to live in a near-constant state of secondhand embarrassment. American Animals is often funny, but calling it a cringe-comedy would be going too far. The presence of the real, now 30-something masterminds and the obvious baggage they carry makes that impossible. The state the film produces in its viewers — or in this one, at least — is something like muted dread coupled with weary amusement. It’s the cinematic equivalent of “oh no, honey, what are you doing?!”

Much of the credit for that deeply uncomfortable state is due to the thoughtful writing and direction of Bart Layton. His approach is neither clinical nor sympathetic, yet there’s both empathy and a sense of objective detachment present at all times. Some of the tools in Layton’s toolbox are more effective than others; occasionally the contradictions that emerge feel scripted, and while it’s engaging to watch these contradictions play out in the narrative, his real-world participants don’t have the knack for making such moments feel improvised. Most of the cuts from dramatization to reality work well, some extremely well, but there are perhaps one too many lingering shots of a forlorn face, lost in mid-interview remembrance. Still, these are relatively minor flaws, and for the most part Layton’s invention and keen sense of tone and weight make for an engaging ride.

If a few such tools are overused or ineffectively deployed, there are others Layton and his team deploy brilliantly. The biggest and best is a simple one: restraint. The biggest item on the to-steal list is a gorgeous Audubon book, really more of a collection of paintings, and the artwork itself serves as a potent motif, one that’s returned to sparingly. They’re beautiful, but also scientific, intended as a reference as well as a work of art. In that, they’re both fact and fiction, a faithful depiction that can’t help but bear the artists’ mark. It’s a handy thematic parallel, and the infrequent appearances of both birds and paintings greatly increases their power, even granting the film the occasional sense of wonder. Two of these moments are among the best sequences in American Animals, though to say too much would be to remove some of their pleasure. Just know they’re coming, and each is a doozy.

Also marvelous? The four performances that sit at the film’s center. Jenner and Abrahamson have the least to do, but make the most of their screen time, with Jenner in particular finding the perfect balance of humanity and insufferability (a balance which contrasts nicely with his winning turn in The Edge of Seventeen). But while those two are good, the film belongs mostly to Peters and Keoghan, and to the men they’re portraying. Neither performance feels like impersonation — age alone removes the need for such thing — but both young men are impeccably well-cast. Keoghan’s accent wanders, but it hardly matters when he spends a significant part of the film in watchful, loaded silence. His Spencer shows us the cracks in the heist-movie facade, and Keoghan makes it clear that he, at least, always sensed that this would never work, and knew it for the foolish fancy that it was. It’s a thoughtful, layered performance, and without it, the film would lose much of its heft.

Still, the main event here is Peters, who should play self-destructive, charismatic tools for as long as he possibly can. As a part of Ryan Murphy’s band of repertory players, Peters has proven his range — though it must be acknowledged that some stretches are easier than others. While American Animals may not be much of a test of his skill as a chameleon, it’s a hell of an opportunity for the actor to go deep, rather than broad. It’s not easy to convey dissatisfaction without lapsing into either monotony or a bland wash of restlessness, and Peters avoids those pitfalls, giving Warren a dissatisfaction that’s palpable, active, and unwelcome to its owner. In that he finds endless variation, so when Warren finally descends into that flat, empty place, it’s something new, and all the more effective. His only real rival for the film’s best performance is the great Ann Dowd, who in her few scenes as an efficient but friendly librarian conjures a performance that’s unsettling in its vivid humanity, one uncomfortable groan or impatient flick of the eyes at a time.

Vivid is a good word at large, here. There’s a freshness and energy to American Animals as visceral as Spencer’s dread, Warren’s need to push, or the remorse their grown counterparts feel for the damage they inflicted on others and themselves. It’s not perfect, but life rarely is; it’s left somewhat unresolved, and so are most lives. Heists aren’t capers, consequences aren’t tidy, and people are always something of a mess.