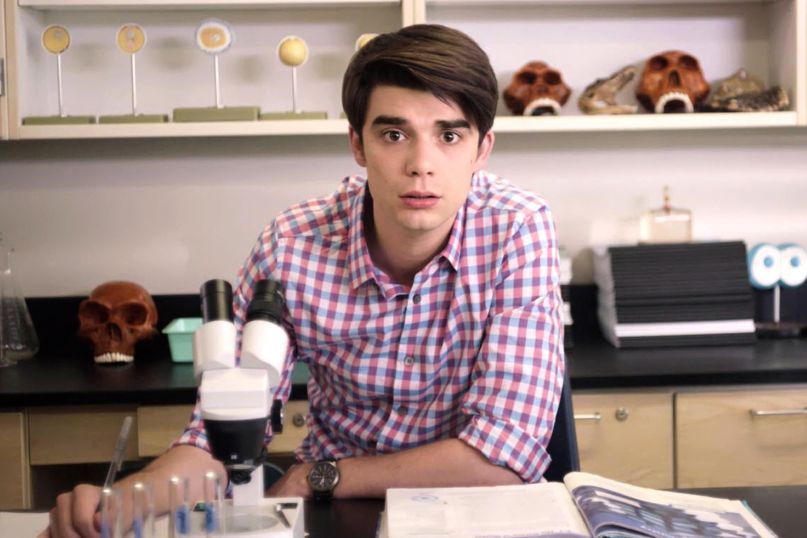 In an age of (comparatively) rising LGBT understanding and acceptance, especially in media, it’s still a wonder that it’s taken this long to get mainstream queer-friendly films geared toward the generation that needs them the most: teens. It’s been a scant few months since Love, Simon gave young queer kids in small towns a studio-backed gay love story they could actually go see at the multiplex, and last year’s Call Me by Your Name garnered significant critical attention for its airy arthouse take on same-sex affection. Alex Strangelove, for all its charms, lacks the box-office accessibility of the former and the artistic command of the latter. It’s the awkward tween of gay coming-of-age movies: earnest and confident, but more than a little clumsy.

“When it comes to mating, I’m not really sure what kind of animal I am,” says Alex Truelove (Daniel Doheny) in the animal-kingdom compative montage of the film’s opening minutes. (Yes, Mean Girls did it first.) Alex is a popular kid, if a gentler one – smart, neurotic, more than a little dweeby, just popular enough to become student body president while not being popular enough to be a chick magnet. As Alex is wont to tell the audience, he’s not a posturing proboscis monkey, or a monogamy-happy penguin. He doesn’t know who he is. He’s more likely to observe than to act, perhaps afraid of how he’ll really feel if he dares follow his instincts.

These problems are exacerbated when he and his longtime friend/girlfriend Claire (Madeline Weinstein) make plans to follow through with their self-imposed pressure to have sex; he’s a virgin, and always chokes up at the big moment. Alex chalks it up to “waiting for the right girl,” but by the time he falls into an unlikely friendship with Elliott (Antonio Marizale), the cute (and openly gay) kid at school, it becomes clear – to the audience, at least – that there’s something more to his apprehension regarding Claire, even if he won’t admit it.

However, the film occasionally trips over some genuine insight into the layers of teen confusion and self-discovery that are so often integral to the coming out experience. There’s Alex’s desperation to belong, a prudishness about sex that masks his own secret desires, babbling reams of excuses to avoid confrontation, and so on. But as the walls come down and Alex makes new discoveries about himself bit by bit, the film shifts from quirky comedy to a well-intentioned earnestness that comprises Alex Strangelove’s most effective moments. “Don’t people know who they’re attracted to?” asks Claire late in the film. The answer, of course, is that people often don’t – especially when they’re still figuring themselves out.

There’s a lot of writer/director Craig Johnson’s charming 2014 indie The Skeleton Twins in the DNA of Alex Strangelove. Doheny, with his lanky frame and quirky wit, could easily sub in for a young version of Bill Hader’s tormented gay character from that film. They each have a John Hughes-ian love of ‘80s pop music, including a signature scene in which one character dances exuberantly to an iconic cut (here, it’s Elliott swinging his hips to The B-52’s “Dance This Mess Around” for Alex in his room). Both films even give their tortured protagonists a moment of existential contemplation at the bottom of a pool. Tasked with migrating that same raunchy, bittersweet tone to a straightforward coming-of-age story, Johnson falters, leaning hard on creaky jokes about boys’ imperfect understanding of female anatomy or condom use, or trip-out sequences triggered by licking toads, as its main comedic devices. It’s certainly more potty-mouthed than other films of its ilk, but it doesn’t handle raunch as inventively as its moments of ‘it gets better’ sincerity.

It’s just a shame that Alex Strangelove delivers so much of that sentiment with the subtlety of a rainbow sledgehammer. In one particularly tacky moment of surrealism, Alex lines up cereal boxes on the kitchen counter, their titles quickly morphing into “Heter-Os,” “Gay Flakes,” or “Bi-Crunchies.” Which to choose? he wonders. When announcing to his friend Dell (Daniel Zolghardi) that he thinks he’s bisexual, Dell immediately brushes that aside because he doesn’t “listen to Panic! At the Disco while jerking off to pictures of vampires.” For a movie so concerned with LGBT issues, it also curiously throws the non-G letters under the bus; the only trans or genderqueer person seen in the film is depicted as a Goth weirdo. Sure, these positions are coming out of the mouth of a character who’s a clear dipshit, but it’s a little strange that the film doesn’t sufficiently counter his bluster in any meaningful way.

A climactic montage of teenagers vlogging their coming-out stories is a heartwarming reminder that movies like Alex Strangelove, however flawed, have value in helping confused young kids through their own journeys out of the closet. In a world where LGBT people are more accepted than ever, it’s still a scary time to come out, even if it’s just to yourself. It’s these moments of warm-hearted understanding that make Alex Strangelove a worthwhile addition to the ‘coming out film’ canon, even if what surrounds them is more than a little shaky and derivative.