Anthony Bourdain Was Never Afraid to Let Culture Change Him 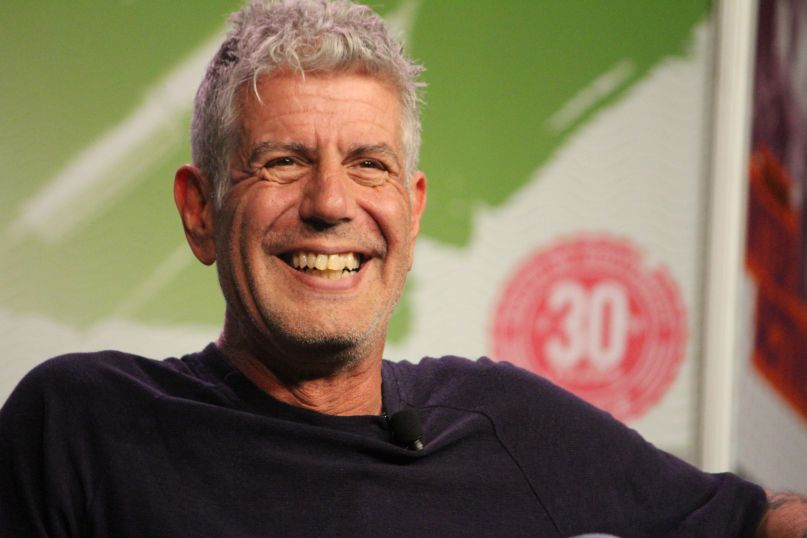 This article originally ran the day after Anthony Bourdain passed away in 2018. Today marks two years since his passing.

Some men get a haircut in high school and just stick with it until the day they lose it all. It’s a metaphor for how the male of the species lives his life post-college: stuck in his ways, unable to change with the times, wondering out loud when things will go back to what they perceive as “normal.” Anthony Bourdain was a man that the world saw change and grow throughout the years, from his first New Yorker piece to his recent alignment with the #MeToo movement. Bourdain always kept it real, but his reality was perpetually changing.

Throughout his 61 years, Bourdain changed careers several times, from a line cook to a chef to a writer, television personality, filmmaker, and advocate for human rights and culture. As he moved through the world, Bourdain became a voice for change in the restaurant industry, the world at large, and, by his example, ourselves. His honesty is what kept him grounded, and that honesty comes across fully formed in his first big published piece, 1999’s “Don’t Eat Before Reading This” (an unsolicited submission he made at 42 years old, at the suggestion of his mother), where he explains to the casual eater what really happens on the line in New York’s top kitchens — and around the world.

The ensuing Kitchen Confidential found Bourdain recounting the seedy, and certainly not “politically correct,” service industry with unparalleled, wry honesty. It was a wild peek behind the swinging kitchen doors for outsiders, but anyone who has spent any time waiting tables, washing dishes, or working the flat top — from a suburban Chili’s to the kitchens of the most exclusive restaurants in New York City — found something, or someone, to relate to in that book. (Bourdain was a gifted storyteller, not only with the written word, but with his voice, and hearing the man himself tell it in the audiobook version adds a deeply personal level to the tales.)

Bourdain also honestly delved into his drug addiction in Kitchen Confidential, never glamorizing heroin and also never really decrying it. It was a chapter in his life and part of who he would become.

The closing chapter of the updated Kitchen Confidential found Bourdain on a journey on which he never could have seen himself while wearing a paper hat and dunking french fries at a New York diner. As a young man, Bourdain made his way to France with his family, but work obligations, a lack of money, and addiction kept the chef in New York for the better part of his adult life. “Some delusional crackpots walked into the restaurant and offered me a T.V. show,” Bourdain explained to Today in 2017. “They showed up reeking of garlic with a really bad attitude, and I said, ‘I got a great idea: I travel around the world doing whatever I want and every cool place I’ve ever dreamed of,’ and they said, ‘we’ll take 13 of those.’” Bourdain was soon on his way to Japan to tape the first episode of A Cook’s Tour for Food Network. He compared his first trip to Tokyo to his first acid trip: “Nothing was ever the same for me. I just wanted more of it.”

From that first piece in the New Yorker, Bourdain came across as introspective, but it was his travels, having a beer with people around the world and exploring different cultures, that inspired a transformation in the heart and mind of the original “bad boy chef.” Learning about different cultures helps people become less afraid of the unknown, and a shared love of art can build a bridge across time and space; as Nelson Mandela said, “Education is the most powerful weapon which you can use to change the world.” Bourdain’s shows weren’t just about food: they were about music, film, art, and people. He treated each episode like a character study, but the character was the city. His natural curiosity brought him to the jungles of Cambodia and the streets of New Orleans, always willing to admit that he didn’t know everything about everything. Each week on A Cook’s Tour, Parts Unknown, The Layover, and No Reservations, he brought viewers along with him, educating himself and the world. He was the ambassador to the world that America deserved: an effervescent, enthusiastic New Yorker, always respectful of culture, teaching and inspiring people not to be afraid and to simply try new things. He wasn’t a colonist looking to change other cultures. He let cultures change him.

Along with his curiosity and openness, it was Bourdain’s blunt personality and honesty that endeared him to fans around the world. By 2018, the brash, loudmouth cook who had penned Kitchen Confidential in 2000 was certainly still in Bourdain’s blood and soul. But he also showed growth and the maturity that should come with age. In an era where the denizens of Twitter are quick to condemn anyone they don’t perceive as “woke” enough, Bourdain provided a notable counterpoint, someone who knew that he had done nasty things to good people — be it something as micro as talking trash about Rachel Ray or macro as encouraging the “meathead culture” of the restaurant industry — but worked to improve himself and educate himself. That was something he had to reckon with every day of his life.

Anthony Bourdain in The Layover: Rome

Look no further than 2008’s Medium Raw to find a man who never tried to sugarcoat his fuck-ups throughout his years. In the book, he speaks candidly about hating the fact that his parents gave him everything he ever wanted, and he squandered it all. He never painted himself as a victim of circumstance and always owned up to the fact that he chose the life he made for himself. “[When I die], I will decidedly not be regretting missed opportunities for a good time,” he wrote in Medium Raw in 2008. “My regrets will be more along the lines of a sad list of people hurt, people let down, assets wasted and advantages squandered.”

More recently, Bourdain spoke out as an ally to women in the wake of the Harvey Weinstein allegations, a stance almost certainly inspired by his relationship with Asia Argento. Bourdain’s debut book famously shed light on the sometimes sexist aspects of the restaurant industry. Nineteen years later, he had to look inward and reckon with the fact that maybe his work, the book that gave him a second act and took him from dunking french fries to travelling the world, was, in fact, part of the problem. In an interview with Slate last fall, he pondered whether he was part of the problem when it came to the “meathead culture” of the restaurant industry, asking himself:  “To what extent in that book did I provide validation to meatheads?” He also wrote on his Medium account:

To the extent which my work in Kitchen Confidential celebrated or prolonged a culture that allowed the kind of grotesque behaviors we’re hearing about all too frequently is something I think about daily, with real remorse. In these current circumstances, one must pick a side. I stand unhesitatingly and unwaveringly with the women. Not out of virtue, or integrity, or high moral outrage  —  as much as I’d like to say so  —  but because late in life, I met one extraordinary woman with a particularly awful story to tell, who introduced me to other extraordinary women with equally awful stories. I am grateful to them for their courage, and inspired by them. That doesn’t make me any more enlightened than any other man who has begun listening and paying attention. It does make me, I hope, slightly less stupid.

I had the pleasure of interviewing him about his favorite heist films last year, in the wake of his infamous Baby Driver review. (Three words, simply: “Fuck Baby Driver”). He was a hard man to get a hold of. I tried all the proper channels, then, on an afternoon bartending shift at a major chain restaurant, I sent him a DM asking for an interview. He responded immediately with a resounding “Sure!” I spent the remainder of that afternoon emailing one of America’s favorite chefs about our mutual love of the films of Michael Mann. A few days later, I asked him how he was doing, and he explained that he was nursing a Negroni-inflicted hangover. That honesty was present off the bat, and it spoke to me. As I wrapped things up, I thanked him for his time, and he responded, “Always happy to talk about movies.” The Travel Channel host who had sat down with President Barack Obama over noodles and Hanoi beer still found the time to talk with a small-time website about one of his passions outside of food and travel. He was the coolest guy in the world, but he was still the dork who carried around nunchucks in his back pocket throughout college.

As much as Anthony Bourdain was a voice for change, he always kept New York, punk rock, lowly line-cook ideals. Brazen, brash, and direct, he was also honest with himself. He will always be remembered as a wonderful writer, a personality, a traveller (not a tourist), and as a regular guy who got a second chance at life and was always a little dumbfounded with his own fame. “I should’ve died in my 20s. I became successful in my 40s. I became a dad in my 50s. I feel like I’ve stolen a car — a really nice car — and I keep looking in the rearview mirror for flashing lights. But there’s been nothing yet,” he told Biography in 2016.

I admired Anthony Bourdain. I saw a certain kinship with him of “people hurt, people let down, assets wasted, and advantages squandered.” I never saw myself as a service industry lifer, but that’s where I’m at right now, spending every weekend in the trenches with a crew of degenerates and weirdos that could have stepped right out of Kitchen Confidential and into my passout. And I love every minute of it. I also know that even at 38 years old, this is hardly the end of the line as long as I am willing to embrace and even force change like Bourdain did. He was a man who perpetually wrestled with his past, even as he tried to better the future. He showed that you can change your beliefs and your ideals without losing your soul in the process. Who knows, maybe this whole writing thing might work out for me, too.