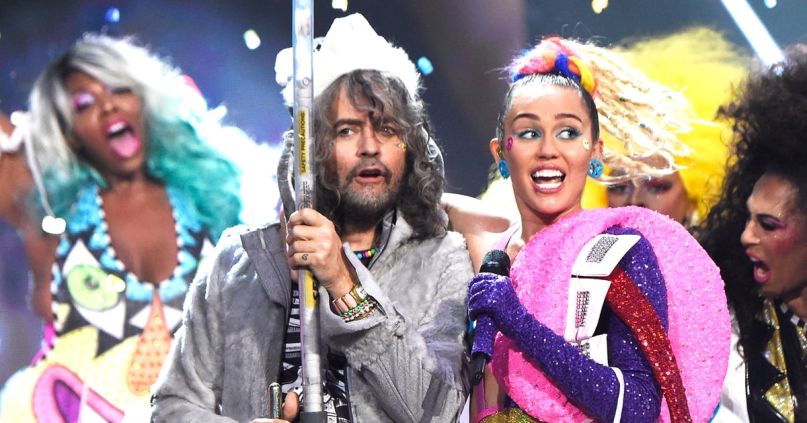 In a new interview with NME, The Flaming Lips frontman Wayne Coyne talks about Miley Cyrus’ urine, among other things. The world’s foremost expert on crowdsurfing inside a giant plastic ball took time out of his busy touring schedule to sit down for a chat about the festival circuit, David Bowie, Post Malone, plans for the future, and of course, about the Lips’ fondness for using unusual liquids when they press their records on vinyl.

In the past, as NME notes, the band has included beer (that they brewed themselves!) and, yes, blood in vinyl copies of their albums. NME’s Luke Morgan Britton asked if there were any plans for odd vinyl additions in the works, and Coyne had a doozy of an answer ready.

“You can’t really up the ante too much from human blood, but maybe when the beer is your own beer – the beer was made especially for the Flaming Lips and has our influence in its taste and colour. That’s not as insane as having a little bit of Erykah Badu, and Chris Martin’s blood in your records. Probably not as insane as that, but still pretty great. The next record we were talking about releasing was the Miley Cyrus and Her Dead Petz record. We’d get a good amount of Miley’s pee and mix it with some glitter and put that in. I think that would up the ante. Don’t you?”

If you’d like to ask Coyne about this in person, perhaps you could shout out your query at one of the band’s upcoming appearances, perhaps after listening to one of their recent deluxe reissues.

Previous Story
In a Rap Beef, There’s No Such Thing as Crossing the Line
Next Story
NOFX booted from own festival in light of crude jokes about Las Vegas shooting
Popular
More Stories
[fu-upload-form form_layout="media" title="Submit Your Photo"][input type="hidden" name="ugc" value="1"][/fu-upload-form]