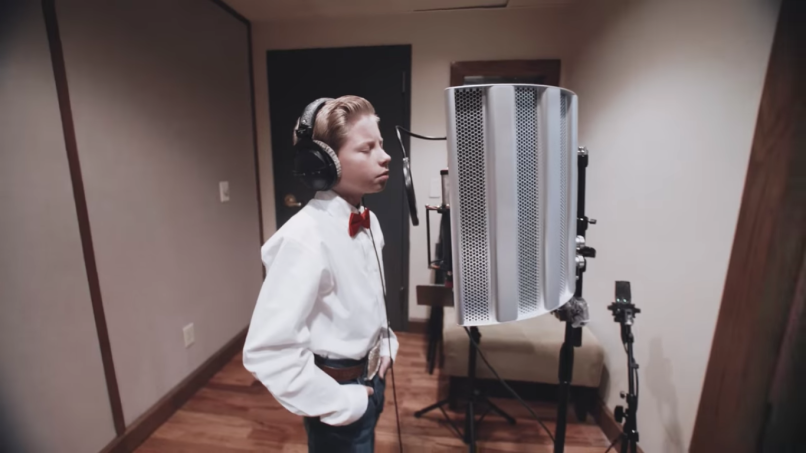 Mason Ramsey didn’t waste any time, did he? After a video of the youngster yodeling his lil’ heart out in the aisle of a Wal-Mart went viral, Ramsey kicked up his spurs on social media and began tipping his hat to the public in earnest. That included a spin on his signature tune, Hank Williams’ “Lovesick Blues” at Coachella, as well as a performance at the Grand Ole Opry in Nashville. He even got to meet Justin Bieber.

Now, Ramsey’s transcended mere memedom by signing an honest-to-god record contract with Atlantic Records and Big Loud. Coinciding with the announcement is the 11-year-old boy’s debut single, “Famous”. Produced by Corey Crowder and Joey Moi, it’s a slice of pleasant pop-country that references Ramsey’s newfound ubiquity without actually giving us the goods. The yodeling, it appears, will appear on the LP that’s no doubt in his future.

“Don’t get me wrong/ It’s pretty cool to be on TV/ So all the folks back home can see me/ And that I’m living it out/ All the things I used to dream about,” goes the track, which builds to a chorus where Ramsey sings that if he’s gonna be famous, “I wanna be famous for lovin’ you.” C’mon, guys, he’s 11!

Check out the song’s lyric video below.

In a statement announcing the deal, Ramsey said: “I’d been to Nashville a few times before, but never thought something like this would happen. It’s a dream to sign with Atlantic and Big Loud. I loved recording ‘Famous’ and can’t wait for everyone to hear it.”

“He has the talent and emotional ability to really feel a song and sing from his soul,” added Atlantic’s VP of A&R Ian Cripps. Meanwhile, fellow A&R guy Seth England clarified that they understand the “goals” of the Ramsey family and “simply fell in love with their story and vision.”

One thing’s for sure: It better involve some damn yodeling.