The Voidz Don’t Give a Fuck What You Think 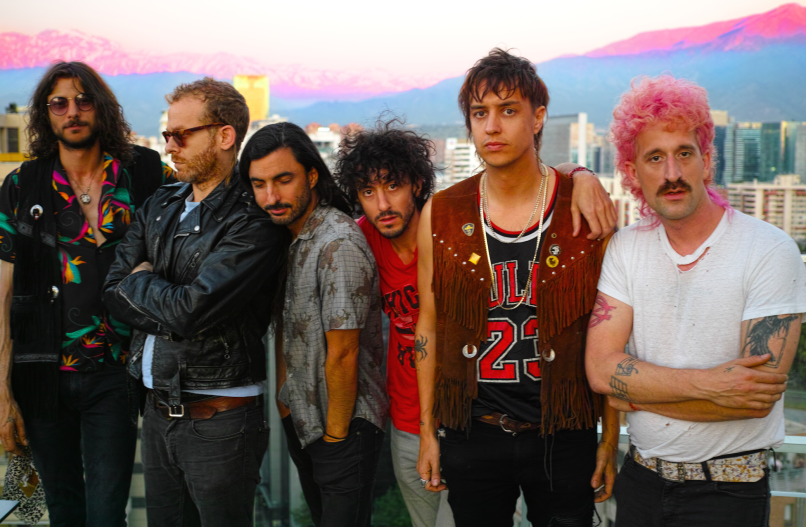 Halfway through my interview with The Voidz, I got a bloody nose. I initially tried to hide it, but after a few minutes, blood gushing down my face, I had to hit pause on our chat and run to the bathroom, leaving both my FaceTime and my recorder running.

Shortly after a few Julian Casablancas wisecracks – “You should take an Andrew WK photo of yourself! Put on a white t-shirt and we’ve got your next Halloween costume!” – he began reading a quote from Vietnamese Buddhist monk Thich Nhat Hanh’s book Creating True Peace: Ending Violence in Yourself, Your Family, Your Community, and the World.

“When we believe something to be the absolute truth, we have become caught in our own views,” he reads, later adding: “We may be practicing a kind of violence by discriminating against and excluding those who follow other spiritual paths… Being caught in our views can be very dangerous and block the opportunity for us to gain a deeper wisdom.”

If anything, The Voidz’s entire existence in 2018 is an attempt to prove this quote. They are hell bent on being the band pushing the boundaries, putting out music that they themselves want to hear, not necessarily anyone else. Instead of staying in a single lane on the freeway, their new album, Virtue, sees them swerving in and out of five or six lanes at once, bringing us all along for a roller coaster of a ride, chock-full of whiplash from the quick-changing tempos and fast-switching genres of each song in rapid succession.

Virtue sees the band, made up of music industry veterans from across a wide spectrum of indie rock, somewhat tone down their Tyranny-era weirdness for something ever so slightly more listenable. But in doing so, The Strokes’ frontman & co. refuse to give in to the critics that largely trashed their 2014 debut, allowing themselves to explore dozens of influences and different styles throughout Virtue’s 15 tracks.

But don’t call these risks, the band tells me – they’re just following their musical interests.

“Everyone in this band is very open musically, so it creates a great environment to create,” guitarist Amir Yaghmai says from his home in Los Angeles, sharing a couch with the rest of the band. “I don’t worry about something being too pop or too experimental when I’m sitting in a room with these guys. It’s one of the first times I feel like I can play whatever I really feel like and not think about the context that it’s in or the audience that it’ll reach. It’s just a really nice feeling of freedom when we’re jamming.”

“Sometimes I feel like I’m an overwhelmed hoarder, editor, curator, and they’re just all freely, wildly, shooting off all of their craziest ideas,” Casablancas adds. “I’m herding these wild creatures and we agree together which ones are good. They edit my edits. It’s a web of cool musical taste and not giving a fuck.”

And many of those “crazy” ideas made it onto the final record: the purposefully out-of-tune guitar solo on opener “Leave It in My Dreams”, the Auto-Tuned vocals on the Middle Eastern-influenced “QYURRYUS”, and the hair metal-esque guitars on “Pyramid of Bones” all feature in just the first three songs on the album. There’s a lot going on over Virtue’s 58-minute running time, and if you blink, you may miss a face-shredding guitar solo here or an acoustic stunner there.

“I feel like we really wanted to not conform,” Casablancas explains, comparing each song on this record to assembling a Mr. Potato Head. “I feel like I was doing something where I wasn’t compromising – we were all trying to get on the same page. I’ve written two different parts and joined them in a song since I was 15. But I think with this record, we did it early on.”

Most of the 15 tracks come from messing around in the studio, jamming along until something that resembled a song emerged, though some, like the Mac DeMarco-esque “Wink” or “All Wordz Are Made Up”, date back to messing around in a makeshift studio in the back of their tour bus. But at each point, every member contributed a great deal to the final record, the overall band utilizing everyone’s individual skill sets in different ways.

“It seems like we all figured out what we all do [well],” guitarist Jeramy “Beardo” Gritter says. “Everyone has these abilities, and I feel like it’s like Voltron, in a sense, because we all come together in one big machine. We don’t plan anything; it just happens in a natural way. I think for this record, it made things faster and more fluid.”

But while each member comes from a different musical background – Beardo has a punk band, keyboardist Jeff Kite is the lead singer of indie pop outfit Beat Club, drummer Alex Carapetis is a touring member of Wolfmother – a major interest in politics is what links them all together. Though the band seemed to want to focus on the album itself rather than politics at large – revisit Casablancas’ wild profile in Vulture for that – the current political climate was impossible to ignore, especially as it serves as a major influence for the record’s lyrics.

“I think all conflicts, whether it’s family or war in countries, are based on the idea that you see your views as the truth and you see people with different views as wrong, and I think that’s where a lot of issues and conflicts happen,” Casablancas says, explaining the frequent use of the words “truth” and “lie” on Virtue. “I think the album and the lyrics – I tried to keep it relevant and universal, so I think it’s accidental that universal concepts happen.”

Casablancas sings quite a lot about the basis of conflict and what is real and what is fake throughout this new collection of songs. “Murder in the name of national security” dots the Gorillaz-esque “ALieNNatioN” while the heavy punk of “Black Hole” features the line “What’s that say?/ NSA, NRA at the gates of psycho city” twice.

Casablancas also appears unsure of where he stands throughout the record, at points crooning: “I don’t really know where I’m going/ Not sure that I want to be knowing.” The first line of “All Wordz Are Made Up” sees him whispering the line, “No one will care about this in 10 years,” apparently repurposing a critique thrown at The Strokes around 2001.

While his lyrics may seem as if he feels lost in an increasingly dark world, Casablancas, as well as the Voidz’s five other members, feels perfectly at home with each other, making extremely bizarre – and sometimes beautiful – music for themselves and no one else, pushing each other to make a record that they would want to listen to rather than one for the critics. Virtue is a record that doesn’t necessarily flow as a cohesive collection, but it never wanted to in the first place.

The Voidz began as a creative outlet for Casablancas and his new collaborators to experiment and get weird in ways that their individual acts couldn’t – and sometimes wouldn’t – allow. Upon listening to the record, you get the sense that with every strange twist and turn, for every guitar screech or Auto-Tuned vocal, Casablancas is somewhere smirking to himself, happy that he has a outlet where he can finally be himself.