Upon his release, the rapper was greeted by the 76ers’ owner and flown by helicopter to tonight’s game 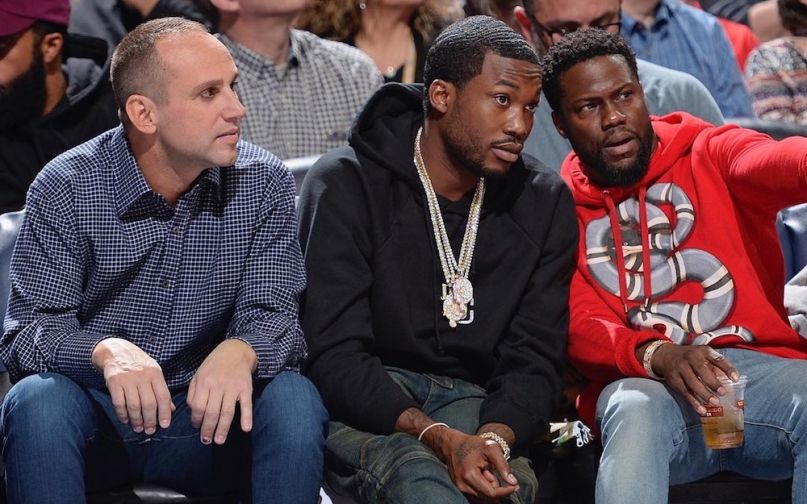 Philadelphia 76ers co-owner Michael G. Rubin was a vocal supporter of Meek Mill during the rapper’s recent incarceration, publicly campaigning for his release and setting up visits with members of the team as well as with Rev. Al Sharpton, NBA All-Star James Harden, and Kevin Hart. As such, it’s no surprise that Rubin personally saw to it that the Meek Mill would be able to attend the 76ers game Tuesday night hours after he was released from prison. Not only was Rubin waiting outside the prison upon Mill’s release, he flew him by helicopter so he could arrive just in time for tonight’s game.

A native of Philadelphia, Meek Mill frequently sat courtside at 76ers games before his two-to-four year prison sentence for parole violation. After arriving to the arena for tonight’s game, he met with some of the 76ers players, took a shower, got a fresh haircut, and put on a Joel Embiid jersey. He then rang the team’s opening bell to kick off tonight’s festivities. Needless to say, his presence at tonight’s game should be a nice boost for the 76ers, which needs one more win in order to advance to the second round of the playoffs and continue to exceed expectations for the season.

On a related note, Meek Mill’s 2012 song “Dreams and Nightmares (Intro)” served as the Philadelphia Eagles’ unofficial anthem during their playoff run and Super Bowl victory. Several players either attended rallies or spoke out against the unfair criminal system which put imprisoned the rapper for a gun charge brought against him a decade ago.

Yup…you could say @MeekMill and @KevinHart4real are amped to be at Heat-Sixers Game 5 [NSFW] ???? pic.twitter.com/2HAd9EJ4Xo

Kevin Hart giving Meek a pep talk as he gets his hair cut — will Kevin continue to talk to D Wade ? “I talk sh*t. I talk sh*t” So, yes. pic.twitter.com/uohunL6leY