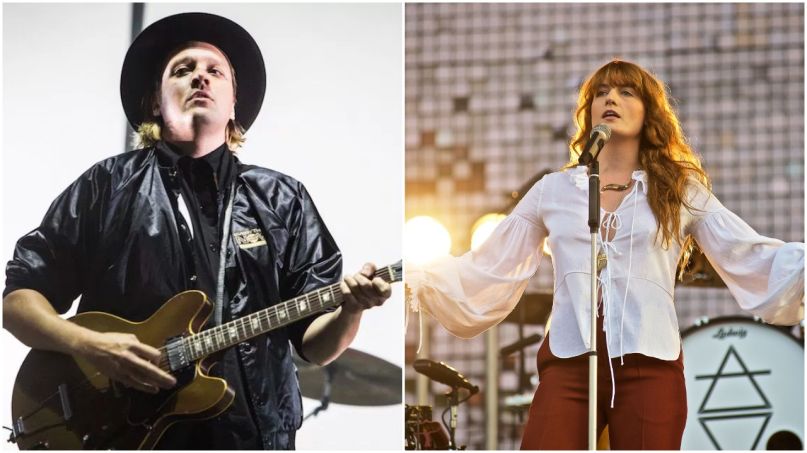 Arcade Fire wrapped up a three-night stint at London’s Wembley Stadium on Friday. As was the case for their two previous shows, the evening featured some notable cameos. Fresh off the release of her comeback single, Florence Welch joined Arcade Fire on stage to perform Florence and the Machine‘s seminal anthem, “Dog Days Are Over”.

In a tweet following the performance, Welch revealed that “Dog Days Are Over” was inspired by Arcade Fire’s “Funeral”, as “I wanted to at least try and make something that could be in any way as beautiful.” She called last night’s onstage collaboration a “dream come true.”

When I was writing this song, I would go to Isa’s studio after art school, (cycling up Crystal Palace hill which takes some dedication) I had been listening to an album called ‘Funeral’
And I wanted to at least try and make something that could be in any way as beautiful…

…I don’t know if I succeeded, but to play it with them last night was a dream come true. @arcadefire changed the way I wanted to make music and I will be forever grateful to them x pic.twitter.com/byn1TgzJbP

Later on in the evening Boy George popped up for a rendition of Culture Club’s “Karma Chameleon,” and afterwards the gang all teamed up for Arcade Fire’s “Wake Up”. Watch fan-shot footage of all the performances below.

Prior nights’ guests included The Pretenders’ Chrissie Hynde, The National’s Bryce Dessner, and Pulp frontman Jarvis Cocker, who performed a stirring, timely rendition of “Cunts Are Still Running the World”.

Later this year, Florence and the Machine will release its first new album since 2015’s How Big, How Blue, How Beautiful. Arcade Fire’s world tour continues tomorrow night in Birmingham.