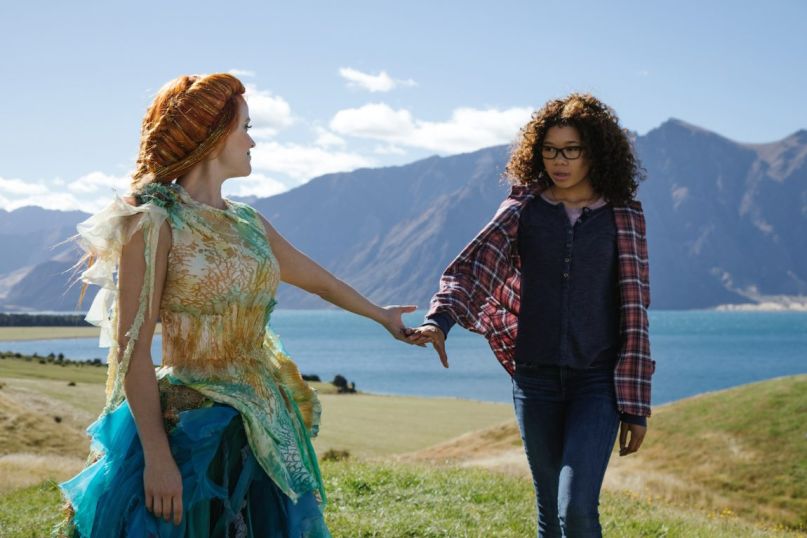 Early in Madeleine L’Engle’s remarkable Newbery-winning novel A Wrinkle In Time, Dr. Kate Murry drops a useful phrase. “Maybe that’s why I’m willing to have a — a willing suspension of disbelief,” she says. “Because of Charles Wallace.” Dr. Murry’s speaking of her matter-of-fact acceptance of a wild-looking nighttime visitor, and of a son who’s different (or “something more,” as his sister Meg puts it), but it comes in handy when describing both the novel from which it springs and Ava DuVernay’s lush, sometimes frustrating adaptation of that novel. Both absolutely require that willing suspension of disbelief, an acceptance that not everything will make sense; both promise that if you relax into it, you’ll understand on a purely primal level, if no other.

In fact, let’s go one step further: both the book and the film absolutely earn that suspension of disbelief, and as is the case with Dr. Murry (here played by Gugu Mbatha-Raw), it’s made possible by an unusually gifted child. Don’t be deceived by the enormous posters of Oprah Winfrey, Mindy Kaling, and Reese Witherspoon — there’s a movie star at the center of this film, but it’s Storm Reid, a prodigiously talented kid whose quiet emotional honesty is the hinge (or wrinkle) on which this film swings. The figures of Mrs. Who, Mrs. Which, and Mrs. Whatsit may loom large (quite literally, in the case of a skyscraping Oprah), but this has always been the story of an angry, confused young girl and the world about which she can’t quite make sense. This is Meg Murry’s movie, and while DuVernay’s visually stunning film may occasionally stumble, Reid does nothing less than soar.

As the film begins, Meg is doing anything but soaring. On a dark and stormy night, she’s alone in her attic, trying not to think about her missing father (Chris Pine), a scientist who disappeared four years prior while on the brink of a major discovery, or about a school bully (Rowan Blanchard), a classic mean girl who knows how to hit all of Meg’s weakest spots. She hates the world and hates herself, but she’s about to get a push in the right direction from a trio of otherworldly beings (Winfrey, Kaling, and Witherspoon). At the insistence of Meg’s extraordinary little brother Charles Wallace (Deric McCabe, delightful), these warriors of light send both Murry siblings and nice guy Calvin (Levi Miller) on an adventure through space and time with universe-in-peril stakes. The goal: to rescue Mr. Murry, who has been lost inside a growing darkness on the planet Camaszotz, and who may be able to help them beat back the force of evil that threatens all of existence. The kids are armed only with their minds and their hearts, so, you know, no pressure.

How do they do all the traveling, flying, and universe-saving? No idea. In fact, most of that was clearer to this writer before seeing DuVernay’s film. Most of the time when we speak of suspension of disbelief, it’s of a lovely but fairly ordinary kind: accepting that dragons exist, that Hogwarts is real, that the TARDIS really is bigger on the inside. Here, where so much is extraordinary, a much stranger kind of suspension is required. We’re asked to believe that these children wouldn’t keep asking why, how, where, when, and what the hell is going on; more than that, we’re asked to not ask those questions ourselves. That’s not an unusual requirement for art, but it’s a strange sensation watching what is undeniably a children’s movie while accepting the kind of tacit pact usually reserved for films like Inland Empire or Holy Motors.

A Wrinkle In Time isn’t the first film for children to make this particular ask. DuVernay’s film and the films of Hayao Miyazaki are more different than they are alike, but it’s a worthwhile comparison for two reasons. The first is that DuVernay’s film, with cinematography by Tobias A. Schliessler, production design by Naomi Shohan, and costume design by Paco Delgado, is every bit as visually stunning and quietly ensorcelling as the films of Studio Ghibli. The aesthetic is wildly different, of course, but the impact is every bit as pronounced. Were it possible, many a viewer would likely choose to fall right back into the world DuVernay’s team creates; this one certainly would. Even the dark and terrible forces are created with such care that they’re breathtakingly beautiful, laced through as they are with a sense of potent wrongness, and when the audience is shown the corners of the world in which light lives, it’s a spectacular and unforgettable thing.

The second reason that the comparison between DuVernay’s Wrinkle and a film like My Neighbor Totoro holds water is that to fully appreciate this movie, you must accept it on its own terms. That suspension of disbelief is required. To seek clarity or to wish for more is to break the spell, and it’s not always easy to sink back beneath the waves and let go. It’s a narrative Magic Eye picture, for better and worse (but mostly better). Stare too hard and you lose it. Only by relaxing into what’s been created can you enter into it fully; the reward of such an action is an understanding that’s not intellectual, but bone-deep. It may not be easily or sensibly explained, but it’s deeply felt, more likely to connect with a tingle at the base of your spinal cord than the coolly logical corners of your mind.

But if the mechanics, the ins and outs and whys and hows, of the world of A Wrinkle In Time aren’t easily articulated, the emotional journey is as clear as crystal. That’s thanks in no small part to Reid, who shows no hesitation at burrowing into the darkest corners of Meg Murry’s world. Part of what has made L’Engle’s A Wrinkle In Time such an endearing classic is its willingness to center and eventually embrace Meg’s flaws and faults, so many of which spring from the kind of unshakable self-loathing one experiences perhaps most strongly as a kid. Watching Reid experience Meg’s happiness and exhilaration is a delight, but it’s in those moments of darkness that she really excels, and without which the glimpses of joy would not achieve the same impact.

Hers isn’t the only great performance. As Charles Wallace, McCabe charms from moment one, and when the action takes a darker turn, DuVernay leads the very young actor to a fun, strange, and unsettling place. Witherspoon, Winfrey, and especially Kaling wield their considerable talents judiciously, doing just enough to make the kids (and the audience) believe in their titanic powers and inherent goodness without shifting the balance of power; even when Oprah’s a towering, goddess-like figure, Reid remains the focus. And in their limited appearances, both Mbatha-Raw and Pine deliver emotionally rich and complicated performances that nevertheless fit perfectly within this messy, kid-friendly world.

Yet A Wrinkle in Time is still a somewhat frustrating experience. Jennifer Lee and Jeff Stockwell’s screenplay, so rich and generous when it comes to exploring Meg’s emotional life, deals rather stingily with the lives of others — particularly Miller’s Calvin, who’s here to be a gem and get a troubling flashback, and Blanchard’s Veronica, who gets a similarly slapped-on bit of backstory that comes off as simultaneously like too much and too little. Both are instances in which we’re meant to understand that everyone is fighting their own private battles, in which DuVernay, Lee, and Stockwell can kill two birds with one stone. But it it’s a feint at digging into that ugly truth, rather than an honest exploration of it, and while one might not wish to give a single second of the gossiping, fluttering flowers or Mrs. Whatsit’s (Witherspoon) glorious transformation into a flying lettuce leaf (both weirder and less so than it sounds), it’s hard to deny that the film would have benefitted from a little extra time spent in the shadows.

That’s the root of the film’s other issues as well. The short shrift given to a few supporting characters does less to imbalance the film than its disinterest in the dark force the children are asked to conquer. In terms of look, sound, and feel, the darkness (here often called The It) is evocative and chilling, but it seems clear that Lee, Stockwell, and DuVernay are much more interested in exploring the light than the dark of evil than in the nature of evil itself or the ways in which it corrupts. With the exception of one knockout scene between Pine and Reid, little time is spent digging into how that darkness is experienced, and less still what allows it to enter our lives. “The wound is where the light enters you,” Mrs. Who (Kaling) tells Meg, borrowing Rumi’s words, but where and now the darkness enters remains an open question.

It’s a bewildering imbalance, because Meg’s personal darkness is explored more precisely than anything else in the film. Yet when it comes time to tie the two together, they seem to remain unlinked. As a result, the final confrontation resonates on a personal level, but not a thematic one. The tingle at the base returns when we’re back in the light, but thrilling though Meg’s fight for the universe and her family might be, the film’s journey into darkness doesn’t reach the highs of its exploration of goodness.

Yet, like Meg Murry, A Wrinkle in Time is a film made somehow more lovely through the acceptance of its flaws and shortcomings. How wonderful, to have a filmmaker tell a story for children in which she is unable to resist the call of goodness and beauty. How perfect, that in a story which traverses galaxies and outraces the speed of light, it’s the moments like a girl teaching an immortal being how to hug, or a little boy shouting down a teacher, that really hit home. For such joys, it’s well worth accepting that not everything will make sense. It’s well worth entering a story on its own imperfect terms. We suspend our disbelief, and are rewarded with warmth, and beauty, and intoxicating, unbeatable light.