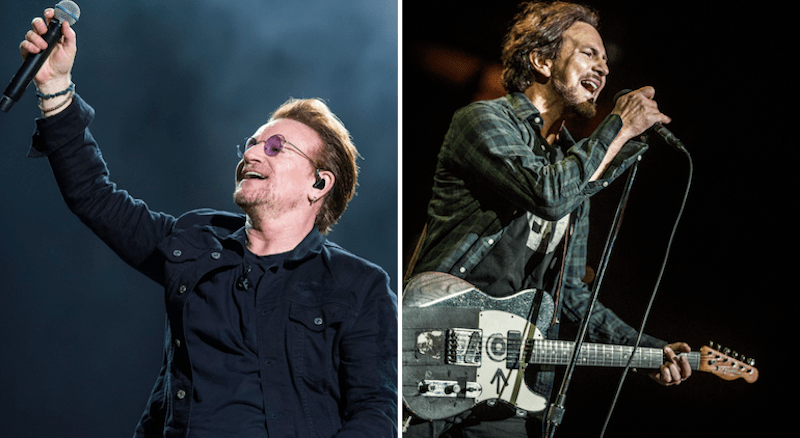 U2 and Eddie Vedder, photos by David Brendan Hall and Chris Hill

Eddie Vedder put on a pair of intimate shows in São Paulo, Brazil this week, both of which were loaded with covers. Footage of the Pearl Jam frontman taking on Nine Inch Nails’ “Hurt” appeared yesterday, and now we’ve tracked down a handful of other videos from the two-night stand.

On Wednesday, Vedder’s 27-song set included a take on U2’s “Bad” from 1984’s The Unforgettable Fire. Vedder first debuted his version of the song while on the road last summer, but this is the first time we’ve seen video of his rendition. He also delivered a stirring cover of the John Lennon classic “Imagine”. Check out clips of both songs below.

With Lennon featured during night one, Vedder brought out a Beatles track on Thursday evening. “You’ve Got to Hide Your Love Away” was slotted in early during the set, but it was the closer that really brought the house down. As he’d done the night prior, Vedder welcomed Glen Hansard to the stage during the encore, ending the show with a performance of Indio’s “Hard Sun”. Check out those videos below.

Last weekend, Pearl Jam took part in Lollapalooza Brazil, where they paid tribute to Chris Cornell and performed Jane’s Addiction’s “Mountain Song” with Perry Farrell. They also gave the live debut to their new single, “Can’t Deny Me”, from their forthcoming follow-up to 2013’s Lightning Bolt.