David Bowie statue vandalized less than 48 hours after its unveiling 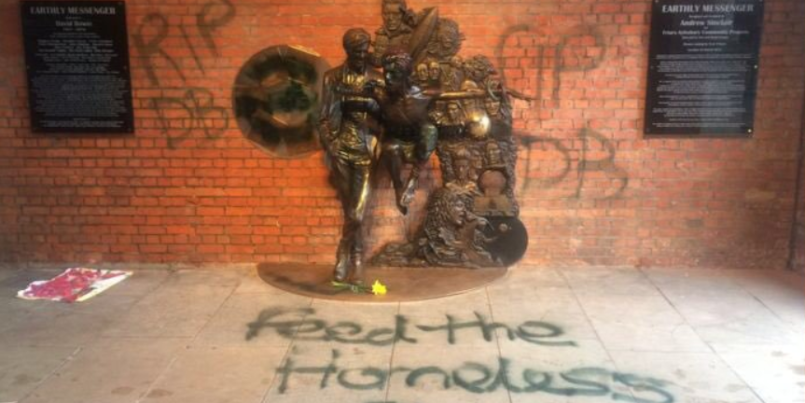 The first known David Bowie statue was unveiled on Sunday in Aylesbury, a small town in Buckinghamshire, England, where Bowie first debuted his Ziggy Stardust persona in July 1972. No less than 48 hours later, the statue has been vandalized.

The memorial was sprayed with graffiti messages including “Feed the homeless first” and “RIP DB.” “The paint was on the statue, the wall behind and on the pavement. It was about the homeless – but I do quite a lot for the homeless, which is the irony of the whole thing,” explained David Stopps, the fan whose £100,000 crowdfunding campaign paid for the statue, in an interview with Mix 96.2 fm.

“The man who created the bronze casting is coming up tomorrow to blow torch it off the statue, which is the only way, and then re-waxing it,” Stopps added.

Designed by sculptor Andrew Sinclair, the bronze statue is named Earthly Messenger and features depictions of Bowie’s various personas. Speakers mounted above the statue will play one of 2,000 Bowie tracks every hour. According to the town’s deputy mayor, Mark Willis, no public money was used: “I want to point out that this statue received precisely £0 of public money,” he said.

Sadly, this is not the first time a memorial honoring Bowie has been vandalized. In September 2016, a plaque hung on Bowie and Iggy Pop’s former Berlin home was smashed to pieces.