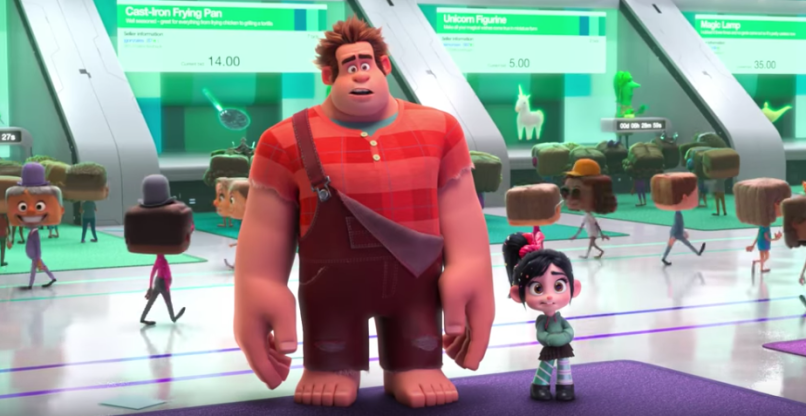 Six years ago, Wreck-It Ralph was just a small-town video game villain looking for a little respect from his peers. But technology moves fast in the modern age, and now he’s a bewildered pixel out of the screen in the biggest digital city there is: the Internet.

In Disney’s computer animated sequel Ralph Breaks the Internet: Wreck-It Ralph 2, the titular strong-guy (John C. Reilly) and his race car driving companion Vanellope von Schweetz (Sarah Silverman) find themselves uploaded to the ‘Net as they search for a way to fix Vanellope’s game, Sugar Rush. The old fashioned character that he is, Ralph has trouble keeping up with the fast paced world of the Internet, while the youthful Vanellope feels right at home. So much so, in fact, that she may have found her true tribe: the Disney Princesses.

The first trailer for the sequel does little to explore this plot, however, instead focusing on cute (and somewhat predictable) .com humor. We also don’t get to see Taraji P. Henson’s new character Yesss, a trendy algorithm, nor returning characters like Fix-It Felix (Jack McBrayer) or Sergeant Calhoun (Jane Lynch). Still, we do get an exploding bunny and cat memes, so check out the preview below.

Wreck-It Ralph 2 will smash into theaters on November 21st.