Death detail the Origins of new single “Give It Back”: Stream 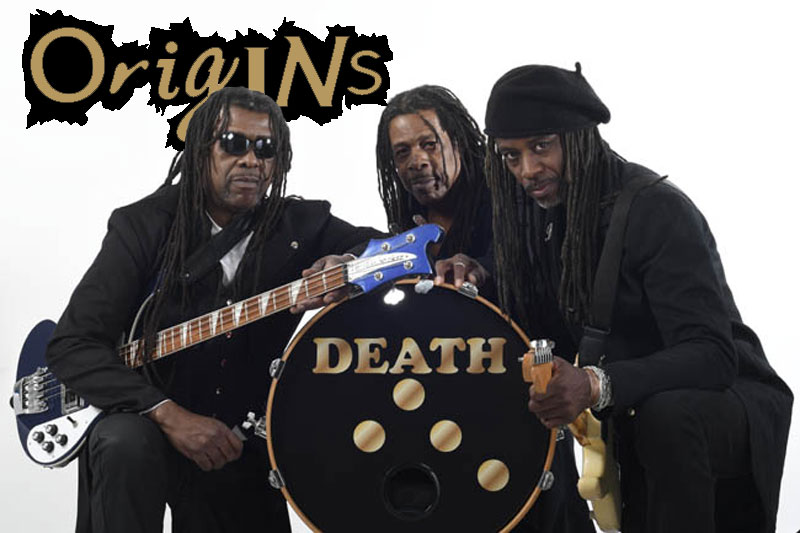 Origins is a recurring new music feature in which an artist charts the influence of their latest single.

April 2017 saw Death release “Cease Fire”, a single in which they lamented the rampant use of weapons of violence in American schools, movie theaters, and places of worship. The proto-punk veterans are back today with a similarly socially conscious offering titled “Give It Back”.

The track was originally penned and demoed by the band’s Bobby Hackney way back in 1979, but revived in just the last couple of months. According to a statement, Death chose to re-record and officially release “Give It Back” as a way to address the environmental and cultural challenges that our society currently faces. The track addresses “global climate changes, social and cultural stumbling blocks, world leaders in disarray, and the dissolution of dreams once hoped for that are proven lies or were lost,” a statement adds.

Death elaborate to Consequence of Sound, “David especially liked the theme of this song as he often predicted that the earth can take only so much of the pollution, garbage, wars, destruction, man’s inhumanity to mankind, and environmental interruption from mankind before it demands us to ‘Give It Back’.”

The song finds Death folding in rock influences from the ’60s, ’70s, and ’80s while critiquing humanity’s lack of accountability and responsibility:

“We can’t hide the fact that we’re on a one way track
We’ve taken from this earth, now it’s time to give it back!
Machines are talking, and mouths are shut.
The appointed leaders are in a rut.
This is not the land of make believe.
As a child they told me that this would be.”

“Give It Back” Single Artwork:

For this edition of Origins, Death break down “Give It Back” and tell us how the current events of the ’70s and Marvin Gaye helped inspire them in the studio. The song will be available as a 7-inch come February 21st; pre-order it here.

The current events of the ’70s:

The inspiration for “Give It Back” is what was happening during the time the song was written and has really come to fruition today. During the time this song was written, the world had just begun to address the concerns about climate-change, robotic and computer devices pushing their way into our everyday lives, the deceptions of government and corporate agendas, and the dissolutions of the expectations of the common man and woman in the so-called pursuits of happiness. The biggest inspiration for “Give It Back” happened on March 28, 1979, the date of the “Three Mile Island Nuclear Accident” It was as if in spite of all the warnings, protests, and crying out for truth, mankind’s relentless disregard for the earth had to bring about the inevitable. If it is true that history keeps repeating itself, where do we stand today?

As predicted by so many musical artists, from Dylan, to Lennon, Marvin Gaye, Joan
Baez, U2, Patti Smith, Stevie Wonder, and so many others: The world won’t beg and
plead with us, it will just take it back, whenever, where ever, and how ever it will. If there is any song or album that help fuel inspiration for “Give It Back”, it would have to be Marvin Gaye’s “What’s Going On”.

Other music of past generations:

The music is up-beat with a melody that rings the tone of the vibe of the great sound of Rock-N-Roll throughout the grooving and surfing 60s, the conscious 70s, and the crossroad 80s. This song is a song for today, a song for right now.