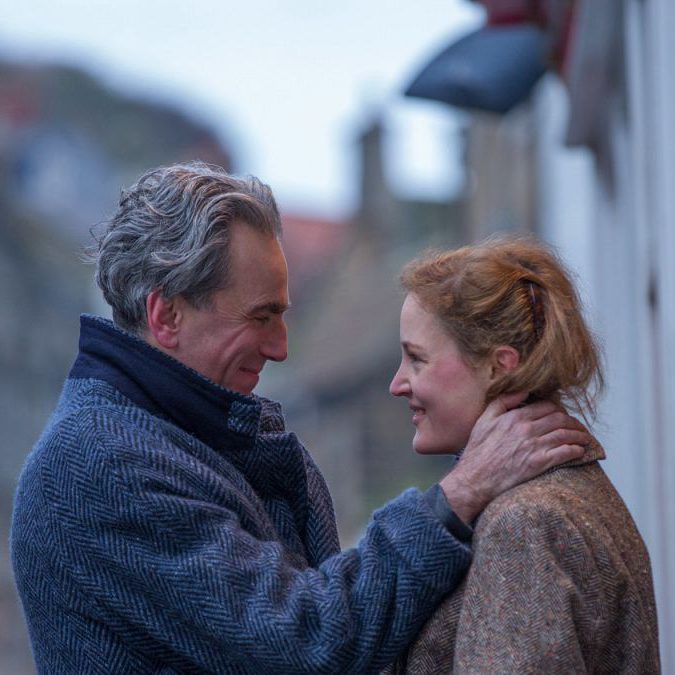 Phantom Thread may be a film about delicacy, but Paul Thomas Anderson‘s latest could hardly be described as delicate. Despite its lingering gazes over all manner of sartorial finery, down to the most minute details, this is a film which in every way moves at the cadence of an Anderson project. In what’ll hopefully be the only unintentional pun you read here today, there is a disciplined seamlessness to the film that commands attention and simultaneously enhances and distorts one’s perception of time going by. It’s in perfect keeping with the mercurial affection and cruelty of its protagonist, or at least one of them, and it’s just one of a series of masterful choices made by a filmmaker who’s indisputably among the best and most compelling working today.

In a couture-minded London of the 1950s, Reynolds Woodcock (Daniel Day-Lewis) makes custom dresses for the most elite names in England, flawlessly transitioning from high-society debutantes to royalty with bold stylistic choices and the finest fabrics. Reynolds, like so many top-tier artists, is a man of routine. To say that he responds poorly to any interruptions of that routine would be to put it as lightly as one can. In the morning, he takes his tea with silence and chafes at the slightest intrusive sound. He works until the late hours of the evening, not so much demanding as simply expecting that the women in his employ will remain until the work is completed to his satisfaction. Needless to say, Reynolds is a complicated lover, particularly when it comes to the women in his life having any expectations of being met halfway. Early on, Reynolds’ right hand and “old so-and-so” Cyril (Lesley Manville) is tasked with removing his most recent paramour from his house for him, Reynolds silently issuing the decree with all the affect of a man being asked to choose between lace and silk.

This isn’t to say that Reynolds is entirely without his charms; Day-Lewis captures the particular way in which so many men of power and talent can activate their best nature at will, fully inhabiting the guise of the swaggering genius until it’s time for him to melt down into a fugue of anxiety and frustration anew. But the clockwork dynamics of his home begin to shift when he becomes smitten with Alma (Vicky Krieps), a waitress at a nearby restaurant. She responds to his demanding particulars in exact fashion, and from that moment there’s little to be said between them. He asks her to dinner, she replies in the affirmative, and before long Reynolds has become Alma’s lover, and in the same breath, her possessor. As Alma muses in voiceover, she’s able and willing to give Reynolds the thing he wants most: “every piece of me.” Soon Reynolds has turned Alma into his muse, but strictly on his own terms. She dines where and when he pleases, in the manner he prefers. He rejects her input about fabric and style preferences as though she may as well be an uneducated child. He worships the ground Alma walks on, but at his speed, and under his own rules.

Yet Phantom Thread is scarcely a chamber drama about the tragedy of genius’s burden. What Anderson, Krieps, and Day-Lewis accomplish is something more elusive, more sinister, and far more daring than audiences will surely expect. This should be no surprise coming from a filmmaker like Anderson, who’s reinvented his aesthetics and interests with every successive feature since the late 1990s, but the Kubrickian comparisons he’ll likely draw here can only say so much about what a remarkable achievement of tone and texture he finds within ostensibly staid material. The camera, maneuvered so expertly by an uncredited Anderson, becomes its own protagonist, drifting in and out of instances and occasionally settling its own severe perspective on Reynolds, or Alma, or nothing in particular at all. Not one movement is out of place, except when it serves the film, and that flawless high-wire act between the breathless pacing of his early work and the observant composure of his recent features makes for some of the film’s most compelling moments throughout.

Phantom Thread is sumptuous in every conception of that phrase, from Anderson’s photography to Mark Bridges’ precise costuming to Jonny Greenwood’s score, the latter of which somehow achieves a new high-water mark for Greenwood’s long-running collaboration with Anderson. But the truly decadent aspect of the film, and the one that will invariably come to define it, is the relationship between Krieps and Day-Lewis. That Day-Lewis is outstanding should come as little surprise to anybody, but the relative intimacy of his performance is perhaps the most striking aspect of it. Where the actor has spent his past several years inhabiting gargantuan personae, here he imbues Reynolds with deep streaks of petulance and weakness. He’s vulnerable in a way he hasn’t been onscreen in years, a man at once at the height of his art form and weakening under the pressures of creation and commerce alike. (At one point he’s passively chided for lacking in “chic,” and Day-Lewis practically snarls at the mere mention of the idea.)

In Krieps, however, Anderson finds the opportunity to create a new star in the same way that Reynolds creates a work of art from modest beginnings. In both character and performance, Alma transitions from a demure countenance to the most thunderous force onscreen, all with the same modulation that everybody in Reynolds’ house is expected to exude at all times. Where so many stories of the artist tortured by art busy themselves with artists throwing bellowing fits before their patient and loving muses, Phantom Thread becomes a case study in who such a muse is, and her own interior life, and the auras of desire and mystery that are both expected of her and, perhaps, her greatest weapons. Alma is more than capable of holding her own against the temperamental Reynolds, and likewise, Krieps delivers one of the year’s most astonishing turns while sharing the screen with one of its most venerated performers. And when she actively steals it away from him? It’s breathtaking.

The film concerns itself with relationships in every form, and while the film perhaps saves its sharpest commentaries for the aforementioned dynamics between creator and muse, it’s as much as anything a film about the inherent give-and-take of any relationship. To commit to another person is to make demands, to consciously or otherwise attempt to shape and mold them into your own self-styled ideal. To give of yourself is to surrender certain traits which define you against any other person. Phantom Thread may be modestly subdued in the presentation of its emotions, but they’re omnipresent, hanging like a haze over every scene and every terse exchange of dialogue. The application of butter to bread sets off a shouting match. The stitching and removal of a two-word phrase becomes the catalyst for profound moments of personal change. This is patient cinema, but overwhelming in its depths.

Phantom Thread is the kind of movie that friends describe as an “acquired taste,” but it’s difficult to imagine how any discerning viewer could consider it less than one of the great films of its year, featuring two of its best performances, and directed by a filmmaker very near the height of his powers. It’s at once subtle and outlandish, sensual and thoughtful, outrageously unconventional and yet one of its director’s most confidently assembled features. A film like this is rare in both its craft and its emotional intelligence, in the way that it yearns to be disseminated for years to come. It’s more than likely that it will be. It’s a truly great film about intelligence, craft, discipline, and the ways in which love and desire can throw firecrackers into even the primmest lives. It’s a truly astounding film by virtually every measure, even if there’s entirely too much movement at breakfast.