Film Review: Paddington 2 Has More Than Enough Charm to Go Around 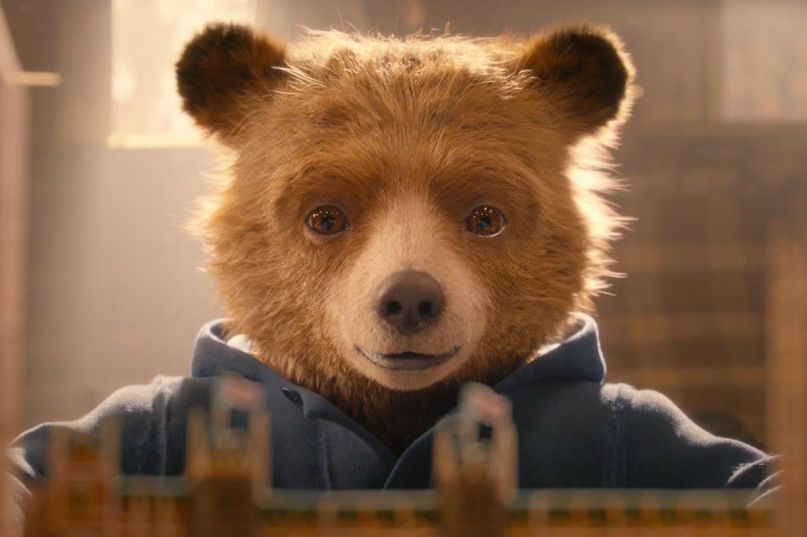 First things first: thanks are in order. Hey, Warner Bros, thank you for rescuing Paddington 2 from Harvey Weinstein. Considering recent events, the film was at risk of not making it to U.S. shores at all, and that would have most certainly been bad. It’s a joy, a jolt of huggable lightning, and we needed something good right now. Something pure. Something that appeals to the common decency that lies dormant within each and every man, woman, and child of this often fatalistic present.

The bear with the hat and the coat is back. A beacon for the very best in ourselves, not to mention the most decent aspects of the English character at large, Paddington is someone to look up and forward to. He provides a universal wholesomeness that’s winningly commendable. Just add brown hair.

In 2014’s Paddington, Michael Bond’s books made a snazzy, Harry Potter-esque transition to the big screen with a digitally crafted bear and real human characters. The Mighty Boosh’s Paul King writing and directing, Potter producer David Heyman overseeing, and Ben Whishaw voicing Paddington became a holy trinity for Bond’s creation, handling him with care and an affectionate sense of play. The same goes for part two, with the trio bringing greater returns, along with the freedom and comfort to try wacky new things. Like sending Paddington to jail, actual danger amidst the cuddlier qualities, and visual allusions to Buster Keaton movies.

But this Paddington is still klutzy, still kind, and still gets into trouble. This time, Paddington is fully embraced by the Browns – Mary (Sally Hawkins), Henry (Hugh Bonneville), Judy (Madeleine Harris), Jonathan (Samuel Joslin), and their caretaker Mrs. Bird (Julie Walters) – and the bear is a fixture in his community. He brings actual cheer and love to friends and neighbors, sound as a pound. He helps the garbage man study for exams, supports local vendors like the newsstand woman, and even happily reminds folks to do little things like not forget their keys in the morning.

Paddington’s so thoughtful that he wants to buy his beloved Aunt Lucy (Imelda Staunton, in voice) a birthday present,  and finds one in an exquisite and exceedingly rare pop-up book about London. The rub: it’s a thousand bucks, and Paddington has but a few marmalade sandwiches to his name. But Paddington is undeterred, and eventually he finds his calling as a window washer. With his briefcase ladder, and collapsible water bucket, the brown beast cordially washes windows. It’s a jolly montage as Paddington rubs his bum and bear paws on windows, cracking smiles along the way. (There’s even a poppy glockenspiel on the score from Oscar winner Dario Marianelli while these washings occur; this movie is just that upbeat.)

But as the bear is about to obtain his precious picture book, a bearded vagrant nabs it. That nasty wouldn’t happen to be that grinning, whey-faced actor, Phoenix Buchanan (Hugh Grant, living it the hell up) that resides up the street from Paddington? The guy with a penchant for disguises, dog food commercials, and Paddington’s precious pop-up? Regardless, Paddington takes the fall. Wrong place, wrong time.

Cut to Paddington in prison. (One that looks conspicuously like a refurbished Hogwarts set.) Paddington understands that justice may take time, and tries to make the most of a bad situation. He even offers to start a gardening club with the first inmate he meets, which goes, uh, not-great-Bob. But Paddington somehow befriends the biggest, meanest dude in the clink: Perpetually combustible chef Knuckles McGinty (Brendan Gleeson, hysterically scruffy).

Will Paddington catch Phoenix Buchanan? Will Paddington get the book? Can Paddington make enough sandwiches that the prison doesn’t go crazy? What is Buchanan’s deal with all his mannequins? Who hurt Knuckles? Can Mr. and Mrs. Brown survive midlife crises? Will Paddington clean up that mess of mustard and catsup? Can washing windows really get you a thousand pounds fast? Will the Browns reunite with Paddington? Some of these questions are easily, predictably answerable with a “yes,” but that’s not the point. The time with Paddington is well spent. Ultimately, the rush for Paddington to get out of jail is a merry one and cores the film – think Grand Illusion meets The Great Race by way of Looney Tunes and The Royal Tenenbaums, with a PG rating and loads of pink for good measure.

Imparting good vibes learned from his Aunt Lucy, Paddington makes nearly every person that crosses his path a little better, happier, and even a bit less selfish. Paddington basically rehabilitates a despondent neighbor with literal sunshine from window washing. The bear can call upon everyone from thugs to local stray dogs to help him, because, well, he’s just that kind of guy. He even refreshes an entire prison with his cuteness, and hilariously transforms the place into a sort of Great British Bake Off with Ring-Around-the-Rosie time.

The message is there: be kind unto others, and they’ll be kind unto you – and a dollop of marmalade doesn’t hurt either. But there’s poppy design, color, and a willingness to explore Paddington’s plight with varied approaches, to effectively sell the movie’s mantra. King crams the film with all sorts of goodies, leaving endless room for creation and calamity. The craft is ridiculously good.

The movie makes way for creative digressions like illustrated fantasies, enviably decorated and chipper homes, preposterously goofy flashbacks, and a gorgeously rendered daydream made to look like a pop-up book in which Paddington resides. Paddington trying his hand as an accidental barber feels like Curly Howard living in a Rube Goldberg cartoon. King’s swirly camera plops little details across the ever-endearing prison, digitally inserting flowers and cakes atop cold brick to show The Paddington Effect. There’s even a train chase that would impress the Tramp. And a prison break-out that equals The Grand Budapest Hotel?

From a Serious Criticism standpoint – what a dazzlingly pro-globalization farce that embraces ‘love thy neighbor’ themes while dabbling in classical Vaudeville filmmaking. From a Family Filmgoer standpoint – what an exciting time at the movies, this Paddington 2. Fun for all ages, as they say. Fur real.

Not to put the fate of the free world on the shaggy shoulders of a children’s book character, but Paddington 2 is like an antidote. It’s that’s good, with oodles of stuff in it for everyone. It’s beyond playful. Wonderful and whimsical, for that matter. Fun to look at and completely immersive. It’s hilarious, heartfelt, and humane, as well. It’s even a tad sagely in its universally appealing lessons of manners, sympathy, and open-mindedness.

Paddington 2 is a film that gives ear-to-ear smiles with its warm hero and well, let’s just say that when the world runs out of natural resources and Zoloft, at least we’ll still have this movie.