Film Review: Hostiles Captures the Developing West In All of Its Brutality 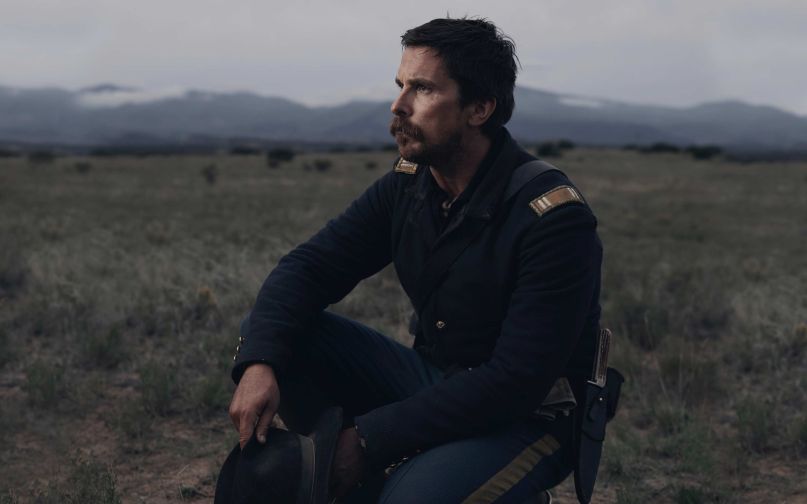 A great many Westerns have concerned themselves with the brutality of the developing frontier, but typically from a singular perspective: that of the white settlers, attempting to tame what they perceive to be a savage territory. Hostiles, Scott Cooper‘s bleak and often brutally violent journey through the American Southwest circa 1892, challenges these notions, at least up to a point. For a genre with so many badly-aged historical examples of noble heroes and barbaric natives, the Western has always also considered American’s true first citizens an integral part of the process of westward expansion, however crassly. Here, Cooper manages to find intermittent moments of truth about the horrors which the other half had to endure, even if his story succumbs to the same outsider’s gaze as often as it finds new insights.

Near Fort Berringer, a prison in New Mexico, Capt. Joseph Blocker (Christian Bale) is tasked with a nightmare mission for somebody as war-worn as the years have left Blocker: escort Yellow Hawk (Wes Studi), a Cheyenne chief, back to his family’s sacred lands in Montana. Yellow Hawk is dying of cancer, and wants to perish in the traditional way, on his tribe’s own land. Blocker, a virulent racist and a man who’s done substantial battle with the Cheyenne and other native tribes in his own time, insists to his superiors that he’s hardly the man for the job, but his pension is held over him, and soon Blocker and a modest cavalry of woefully underprepared men set out on the highly dangerous trek, hoping to get Yellow Hawk and his family home with their own lives intact.

Among their number are Metz (Rory Cochrane), Kidder (Jesse Plemons), Woodsen (Jonathan Majors), and Private DeJardin (Timothée Chalamet). With Yellow Hawk are his son Black Hawk (Adam Beach), Black Hawk’s wife Elk Woman (Q’orianka Kilcher), and their child. Before long, they’re joined by another tortured soul: Rosalie Quaid (Rosamund Pike), a frontier woman whose family was brutally slaughtered in front of her by a Comanche tribe. Near death and bordering on madness, Rosalie first joins the troupe for refuge, and when they quickly find themselves under attack from tribes and roving bands of thieves alike, for her survival, as she tenaciously drags herself back to the land of the living under the most extreme variety of duress. As the days go on and the bodies quickly begin to pile up, Blocker finds himself entrenched in a moral crisis, as he begins to question his own history and his unforgiving skepticism about Yellow Hawk alike.

That’s not to say that Hostiles slides into cloying sentiment as it tells its sparse, brutal story. If anything, Cooper’s film suffers most from the precise opposite; for a film that calls for empathy and understanding between all peoples, it spends the dominant majority of its runtime lingering at protracted length over the horrors we visit upon one another at our very worst. Studi gives a stirring performance as the dying Yellow Hawk, whose eyes betray so much deeply buried anguish and remorse for past sins, but the native family goes far too underdeveloped throughout for the point the film aspires to make about their humanity. This is to take nothing from the actors, as Beach and particularly Kilcher do strong work as a family attempting to retain some sense of self amid the worst possible circumstances, but rather from the film itself, which aims to tell a story of cultural exchange and instead slides into the least engaging version of that story: the burdened white man, learning how to forgive himself and those around him.

Having said this, Hostiles builds a handful of poignant scenes out of its inconsistent premise. Pike is breathtaking in one of these; when she’s forced to finally confront the reality of her losses, she begins to claw at the ground with her hands, refusing shovels or help so that she might bury her own family and retain the last shred of control she possibly can. Later, Ben Foster appears as a former compatriot of Blocker’s, who’s disgusted that his former superior would accept the mission of protecting those who killed so many of his own, and in just a small handful of scenes Foster and Bale manage to flesh out a lifetime worth of memories better left forgotten. If the sum of the film never rises to the highs of some of its most moving parts, those parts are nevertheless worth attention on their own.

But where Hostiles struggles to find a consistent source of empathy, or to reconcile its commentaries on the Western with its occasional trafficking in some of the genre’s uglier generalizations, it’s a wrenching dirge through a country that, as we know now, would never truly answer for any of these sins, or any of this bloodshed, or the divisions that continue to this very day. It’s a sparse film, to be sure, but one authentic to the time in which it takes place, even if that authenticity reads in a significantly different light in our own time. Families are still broken, traditions are still lost to time, and yet mankind finds a way to forgive and grow itself. When it lasts long enough to make those choices, at least.