Film Review: Before I Wake Gets Too Sentimental to Ever Be Scary

Mike Flanagan's long-delayed horror film has some inspired ideas, but succumbs to convention 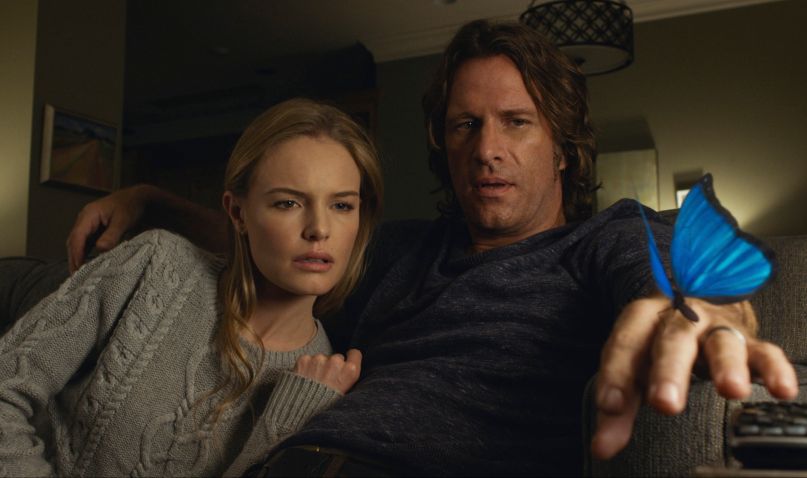 Before I Wake almost never saw release in the U.S. Originally slated for a May 2015 release and subsequently bumped to 2016 before disappearing entirely, the horror film remained a curious case: Why was a genre flick directed by rising filmmaker Mike Flanagan (Oculus, Gerald’s Game) and starring Oscar nominee Jacob Tremblay wasting away on some studio shelf? It eventually was released in the U.K., but, as recently as August, news reports were predicting U.S. audiences would probably never see it. It turned out to be a studio issue—Relativity Media went bankrupt, dooming its forthcoming releases—but Netflix eventually saved the day. The streaming juggernaut has a fruitful relationship with Flanagan (they released both Gerald’s Game and 2016’s Hush, and he’s currently working on its revival of The Haunting of Hill House), and it was just less than a month ago that Flanagan took to Twitter to announce its release via the platform.

The good news? It’s now streaming. The bad news? It wasn’t really worth the wait.

Now, Flanagan’s a very talented writer and director. Even when his films skew towards the mainstream, whether it be via a gimmicky premise (Oculus) or as a sequel to a reviled movie (Ouija: Origin of Evil), he and his co-writer Jeff Howard always manage to impart a great deal of personality and ingenuity into what could be run-of-the-mill shock fodder. That success is due in part to their empathy; their characters are deeply felt, often reeling in the wake of a recent tragedy or hung up on one they can’t quite shake. It’s rare in mainstream horror that deaths are made to matter as much as they do in a Flanagan film.

It’s weird, then, to say that Before I Wake could stand to be a little meaner. It starts strong, with a disheveled man bringing a gun into the room into the room of eight-year old Cody (Tremblay), who wakes up before a shot can be fired. Cut to Jessie (Kate Bosworth) and Mark (Thomas Jane, sporting some long, greasy locks), a couple who decide to take Cody in after he’s apparently been abandoned. It might not be the wisest move for Jessie and Mark to adopt, what with the death of their own son still fresh in their minds, but Cody seems like a perfect child. It turns out he has a strange power, though: His dreams come to life, manifesting for those around him. It’s magical at first, then unnerving, then, well, dangerous.

It’s a neat convention at first, especially in how Flanagan initially uses it not as a vessel for horror but for pathos. Once Jessie and Mark realize they can see and touch their late son when Cody dreams of him, Flanagan draws upon the chewy themes of Stephen King’s Pet Sematary to explore the unsavory consequences of drudging up that which is gone forever.

Soon, however, the lines begin to blur. Cody begins to encounter his nightmare creatures when he’s awake, and they manifest in a variety of ways that feel less influenced by the action than by modern horror conventions. As it lurches into its second act, Before I Wake begins slavishly following the beats of its studio horror contemporaries, (mostly) abandoning its nuance for rote investigations into the cause of the phenomena and horror set pieces that defy the previously established logic of the dream manifestations. A tepid climax gives way to an epilogue that, in couching the horror that came before it in psychology, seems to bring into question the realities of what we witnessed. The result is narratively satisfying, but also unbearably saccharine in addition to deeply confusing.

Tremblay, unsurprisingly, emerges as the film’s standout star, though credit also goes to Flanagan and Howard for writing a child in a horror movie that, on its surface, isn’t creepy. From The Ring to The Babadook, it seems that even when kids aren’t the source of evil they’re still depicted as being freaky little buggers. Cody’s dreams are horrific, but the boy himself is charming and upbeat. One of Tremblay’s biggest strengths here, oddly enough, is his ability to play his own age rather than someone wise beyond their years, as is often the case with children in horror.

Before I Wake was set to be Flanagan’s much-hyped follow-up to the surprise success of Oculus. Instead, the well-received Hush, a better film in numerous ways, ended up propelling the director towards a plum gig with Blumhouse and the chance to make his dream project with Netflix. Now, with Flanagan’s career steadily ascending, it’s a much better time to release this movie, an assuredly minor entry in his oeuvre.