Erykah Badu had some weird shit to say about Hitler, Bill Cosby in bonkers new interview

"He had a terrible childhood" 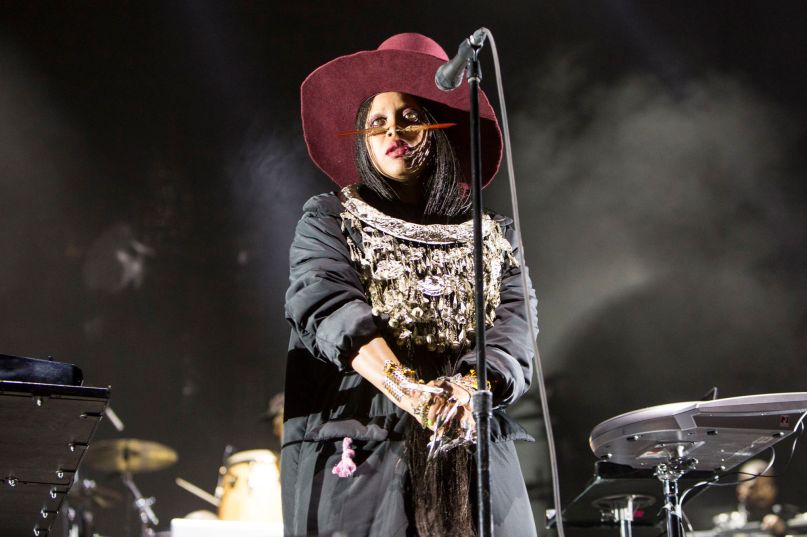 Erykah Badu is celebrating the 20th anniversary of 1997’s Baduizm. To mark the occasion, the R&B legend gave an absolutely bonkers interview to Vulture.

In it, she spoke about the good in Bill Cosby and Adolf Hitler, addressed accusations of anti-Semitism, elaborated on her relationships with rappers like André 3000 and Common, and pondered the Trump presidency. Read some choice excerpts below:

[I] don’t want to get scared into not thinking for myself. I weigh everything. Even what you just asked me, I would have to really think about it and know the facts in each of those situations before I made a judgment. Because I love Bill Cosby, and I love what he’s done for the world. But if he’s sick, why would I be angry with him? The people who got hurt, I feel so bad for them. I want them to feel better, too. But sick people do evil things; hurt people hurt people. I know I could be crucified for saying that, because I’m supposed to be on the purple team or the green team. I’m not trying to rebel against what everybody’s saying, but maybe I want to measure it. Somebody will call me and ask me to come to a march because such and such got shot. In that situation I want to know what really happened. I’m not going to jump up and go march just because I’m green and the person who got shot is green. The rush to get mad doesn’t make sense to me.

On being labeled an anti-Semite and “the good” in Hitler:

So I’d gone to Palestine and journalists asked me, “Do you believe in Louis Farrakhan? Do you follow him?” Sure I do. I’ll follow anyone who has positive aspects. He single-handedly changed half of the Nation of Islam to clean eating, clean living, caring for their families. He has flaws — like any man — but I’m not responsible for that. I said I’ve appreciated what he’s done for a lot of black Americans. I mean, I’m not Muslim, I’m not Christian, I’m not anything; I’m an observer who can see good things and bad things. If you say something good about someone, people think it means that you’ve chosen a side. But I don’t choose sides. I see all sides simultaneously.

That’s not something most of us are good at.
We’re not, and I’m okay with that. I’m also okay with anything I had to say about Louis Farrakhan. But I’m not an anti-Semitic person. I don’t even know what anti-Semitic was before I was called it. I’m a humanist. I see good in everybody. I saw something good in Hitler.

Come again?
Yeah, I did. Hitler was a wonderful painter.

No, he wasn’t! And even if he was, what would his skill as a painter have to do with any “good” in him?
Okay, he was a terrible painter. Poor thing. He had a terrible childhood. That means that when I’m looking at my daughter, Mars, I could imagine her being in someone else’s home and being treated so poorly, and what that could spawn. I see things like that. I guess it’s just the Pisces in me.

I’m perfectly willing to accept that you might be operating on a higher moral plane than I am, but I think going down the route of “Hitler was a child once too” is maybe turning the idea of empathy into an empty abstraction.
Maybe so. It doesn’t test my limits — I can see this clearly. I don’t care if the whole group says something, I’m going to be honest. I know I don’t have the most popular opinion sometimes

But don’t you think that someone as evil as Hitler, who did what he did, has forfeited the right to other people’s empathy?
Why can’t I say what I’m saying? Because he did such terrible things?

Well, yes. But it’s also disheartening to hear you say that at a time, like now, when racism and anti-Semitism are so much in the air. Why would you want to risk putting fuel on that fire?
You asked me a question. I could’ve chosen not to answer. I don’t walk around thinking about Hitler or Louis Farrakhan. But I understand what you’re saying: “Why would you want to risk fueling hateful thinking?” I have a platform, and I would never want to hurt people. I would never do that. I would never even imagine doing that. I would never even want a group of white men who believe that the Confederate flag is worth saving to feel bad. That’s not how I operate.

The thing about Trump is that he’s a bad guy to the point where it looks manufactured. Are we playing games here? He can’t really be that bad. I’m not a conspiracy theorist at all — I don’t give a shit about that stuff — but it looks like Trump’s just trying to spark division. It looks like a game. Why are we being toyed with?