The surprising final bite "is a one-way ticket," according to Scott M. Gimple 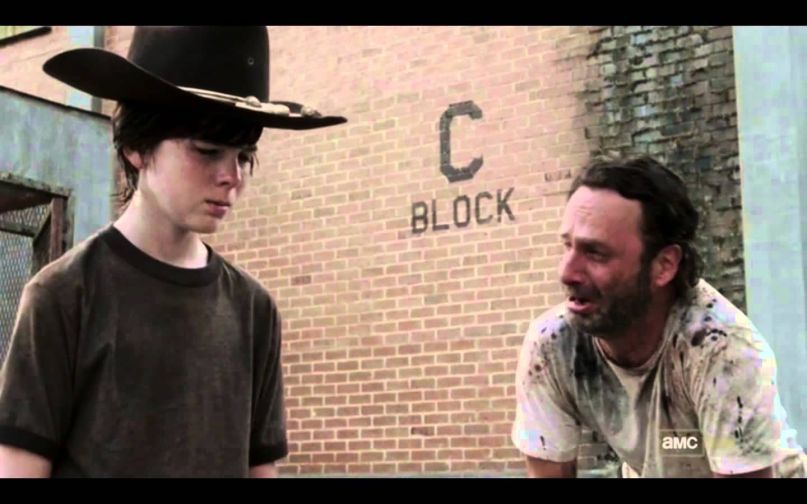 If you haven’t watched the midseason finale of The Walking Dead, turn back now. Major spoiler warnings are the basis of this entire article, so if you didn’t catch Sunday’s episode, just close this window.

The episode ended with the revelation that Carl Grimes, played by Chandler Riggs, had been bitten in the ribs by a walker — a mortal wound in the world of the show. In the aftermath of the revelation, fans were left in shock and an understandable disbelief; after all, TWD had pulled the rug out from under them before (remember Glenn’s first death?). However, it seems this time things are very much for real.

“That is a bite on his side,” showrunner Scott M. Gimple said on the Talking Dead aftershow. “It will play out as bites play out on the show. It’s very important to Carl’s story and the entire story, what happens in the next episode. I’m just focused on the fact that Carl right now is alive and he has some business to attend to.”

(Read: The Walking Dead and Why It’s Time to Bury the Zombies)

If you’re finding hope in that “Carl right now is alive” statement, you might want to abandon it. “That is a one-way ticket,” Gimple continued. “But I’d like to think that the things we see in the next episode are so important to his life and the other characters’ lives.”

As for Riggs, he said the news of his characters death completely upended his plans. He had intended to go to college next year, but with his work on TWD apparently coming to an end, he’ll now take a gap year in Los Angeles to expand his acting credentials. ” It ended up being a great thing because now I get to do all kinds of other stuff that I haven’t been able to do in the last eight years,” he told The Hollywood Reporter. He added, “Leaving Walking Dead wasn’t my decision. It was all story related. It made sense story-wise for it to happen for Rick and Michonne and all the other characters.”

How the characters react to the devastating loss will be revealed when the show returns next year. No doubt it will take a major toll on Carl’s father, Rick, who is one of one four original characters still alive (Daryl, Carol, and Morgan being the other three). It also raises major questions for the future of the show; Carl is still very much alive in the comic books, and those are nearly 50 issues ahead of where the TV show’s story is.

Then again, those bastards behind TWD have played with fans’ expectations before. And if you look too closely at Gimple’s phrasing — “it will play out as bites play out on the show” — you might want to remember Hershel, who survived a bite on his leg after it was amputated. Though this is Carl’s side we’re talking about so…