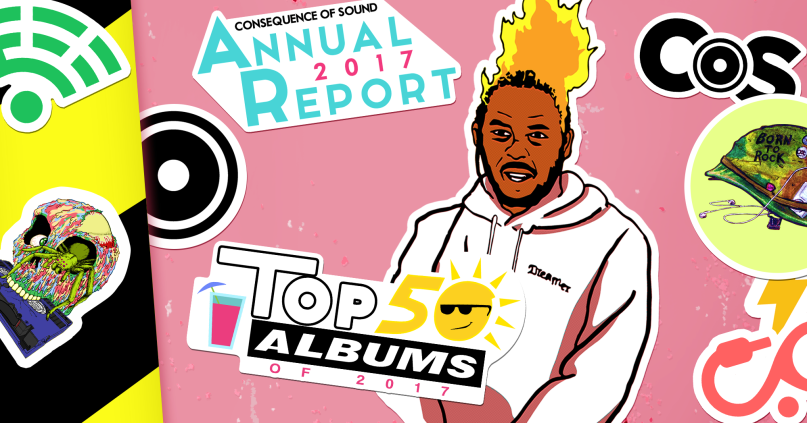 Last year felt particularly cruel as we watched so many of our pop-culture icons get taken from us without warning. By December, we all yearned for a pause, an ending, a reset. However, none of the comfort that comes with the hopeful act of flipping a calendar page lasted long into 2017. Instead, we’ve felt the pain more acutely and more personally than a year ago. Most of us have witnessed our core values challenged, felt our realities shaken, and endured daily reminders that who we are in our most basic integrity remains very much at stake. For that reason, it’s been a year in which we’ve turned to music out of necessity perhaps more than ever. The albums you find on this list aren’t just records we admired or caught ourselves dancing to. In many cases, they’re part of the reason we’re still here. They’ve consoled and empowered us, understood how we’ve felt, and in a time of such ugly, bitter divisiveness, reminded us that we’re never truly alone in mind, heart, or spirit.

These are the 50 albums we’ve leaned on most this year. Here’s hoping they don’t have to do such heavy lifting in 2018.

The Gist: After placing Chromatics’ Dear Tommy in the Red Room, Italians Do It Better producer and multi-instrumentalist Johnny Jewel issued this daring solo album mostly inspired by his work behind the scenes on Twin Peaks: The Return.

Why It Rules: With Windswept, Jewel sounds more assured as a producer than ever, conjuring up a moody amalgamation of his signature brooding synthpop and a style of free-form jazz akin to David Lynch go-to Angelo Badalamenti.

The Gist: Two years after the interstellar, metallic Garden of Delete, esoteric electronic experimentalist Daniel Lopatin (AKA Oneohtrix Point Never) returned to score a crime drama starring Robert Pattinson. Retaining his own burning palette and pushing it through a Vangelis/Carpenter mesh, Lopatin continues to find new ways to inject anxiety and awe under the skin.

Why It Rules: A somber, piano-heavy collaboration with Iggy Pop in which the Stooge dreams about petting crocodiles is a good place to start, but Lopatin delivers the high-voltage thrills all on his own.

Essential Tracks: “Hospital Escape / Access-A-Ride”, “The Acid Hits”, and “The Pure and the Damned”

The Gist: Multiple-instrumentalist Melina Duterte (aka Jay Som) rode her production and recording acumen on debut LP, Turn Into, to a deal with indie major Polyvinyl for Everybody Works.

Why It Rules: In what can only be described as bedroom maximalism, Duterte dug her lyrics into the granular, banalities of existence and aimed her production at expansive soundscapes. On “The Bus Song”, Duterte sings, “I can be whoever I want to be,” and that’s exactly who she is on Everybody Works.

Essential Tracks: “The Bus Song”, “Everybody Works”, and “For Light”

The Gist: After rising to session-player fame by collaborating with Chance the Rapper, Kanye West, and Vic Mensa, 24-year-old trumpeter Segal (FKA Donnie Trumpet) wrangled three fellow Chicago musicians together to expand his interest in experimental jazz, ultimately showcasing how the backbeat of hip-hop’s new sound is worthy of its own spotlight.

Why It Rules: On their debut LP, The Juju Exchange follow in the footsteps of producers like Flying Lotus and Knxwledge — not in sound, but in audience awareness, drawing listeners out of their usual jazz associations and into a world of smooth, free-form, low-key musings that inspire with their use of ample space.

Essential Tracks: “The Circuit”, “We Good”, and “Morning Of”

The Gist: All signs pointed to chaos when director Denis Villeneuve parted ways with composer Jóhann Jóhannsson at the 25th hour, but Hans Zimmer and Benjamin Wallfish rose up to the challenge with an unexpected Hail Mary score.

Why It Rules: In addition to time restraints, both Zimmer and Wallfish had to follow in the footsteps of Vangelis, whose original Blade Runner score remains inimitable. They succeeded with a follow-up that’s both reverent and wholly intimidating.

The Gist: Another lineup change and personal turmoil almost broke up Paramore, but Hayley Williams, Taylor York, and a returning Zac Farro came back stronger than ever to record their most pop-leaning album to date.

Why It Rules: On After Laughter, Paramore step completely away from their pop-punk origins and embrace the influences of Fleetwood Mac, Talking Heads, and Blondie. Catchy sing-along hooks and ’80s pop production combine for a bright, polished sound that barely conceals the heartbreak and pain in the lyrics underneath. Williams describes the album best with the catchphrase “cry hard, dance harder.”

The Gist: The 19-year-old R&B singer’s debut album builds from the buzzing lead single, “Location”, and demonstrates a strong grasp of the pulse of his generation without alienating a greater audience.

Why It Rules: Khalid’s silky-smooth voice and anthemic hooks combine with pop/R&B production for a fresh sound that doesn’t push the rookie too far outside his comfort zone. American Teen is a solid effort in its own right while also allowing plenty of room for growth as he comes of age.

The Gist: Caught between the brutality of the Bataclan massacre and the subsequent ascent of France’s right-wing reactionaries, veteran synth rocker Thomas Mars and co. escaped the tension by looking backward via this Italo-disco ode to bygone Riviera summers.

Why It Rules: Released just in time for the warm-weather months, Ti Amo hit like the aural equivalent of a white wine spritzer: Singles “J-Boy” and “Ti Amo” bubble with a radio-ready fizz, while deeper cuts like “Tuttifrutti” and “Fleur De Lys” add a shade of heady longing to all that sunbaked pop.

The Gist: Riding high off the runaway hip-hop hit “Bad and Boujee”, the prodigious trio of Offset, Quavo, and Takeoff fully capitalized on that momentum with a splendid set of tracks that put even the best work in their mixtape-heavy discography on notice.

Why It Rules: Backed by a cadre of producers, including Metro Boomin and Zaytoven, the success-obsessed bars and hedonistic hooks of Culture perfectly encapsulate the breadth of trap music, from its hypnagogic highs to its unapologetic lows.

The Gist: Another season of Netflix’s Stranger Things means another vintage score from Survive’s own Kyle Dixon and Michael Stein, and that’s exactly what they dropped back in October ahead of the series’ highly anticipated premiere.

Why It Rules: A year has passed. They’re a little older. They’re a little wiser. No longer are they echoing the iconic sounds of John Carpenter or Goblin, but indulging in more modern fare like Bon Iver and M83. Hawkins has never sounded so hip.

Essential Tracks: “Eulogy”, “Eight Fifteen”, and “On the Bus”