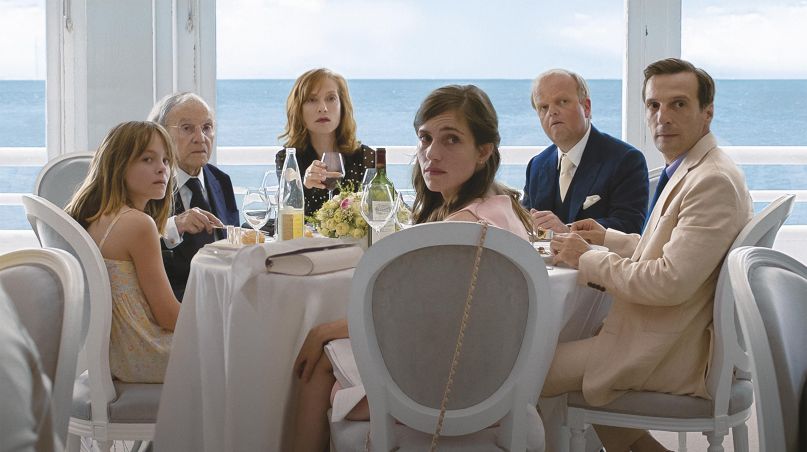 The following review was originally published as part of our coverage of the 2017 Toronto International Film Festival.

Happy End is bookended by a series of Snapchats so brilliantly dark and incisive that it should give pause to even the crankiest skeptic, when it comes to arguments for ,the validity and aesthetic possibilities of social media. In the opening sequence, Eve (Fantine Harduin), a vicious pre-teen, coldly dissects and predicts her mother’s bathroom routine step by step while revealing details of her parents’ breakup and its fallout. There’s a lot packed into those brief shots and flashes of text: a pitch-perfect portrayal of the utter mundanity of depression, a deft hint of the callousness with which that struggle can be received, and a little insight into the sometimes careless, self-centered mind of an adolescent. Even the framing feels like a sinister touch. There’s something perversely amusing about watching a lauded auteur of Michael Haneke’s stature wind up every self-appointed cinematography expert who has ever whined about cell phone films shot in portrait by launching his latest work with it.

The final sequence is similarly sharp and loaded with one hell of a punchline (it’s not a spoiler, if you know anything about Haneke’s oeuvre whatsoever, to say that the film’s title is an ironic one) that comes achingly close to elevating the entire film. Unfortunately the moments in between, as biting and bitterly funny and pointed as those moments often are, never truly come together to form a cohesive and singular work of art.

Shortly after picking her mother’s routine apart, Eve drugs her hamster. Then she repeats the process on her mother, and is sent to live with her father and his family in Calais. The bourgeois bad seed and her foibles fit in with the rest of the Laurent clan almost immediately. Her grandfather, Georges (Jean-Louis Trintignant), previously seen in Haneke’s devastating Amour, is a miserable old man with a death wish. Her aunt Anne (Isabelle Huppert, also reprising her Amour role) is struggling to control the family business and her adult son, Pierre (Franz Rogowski), both of which are crumbling and leaving a certain amount of destruction in their respective wakes. Her father, Thomas (Mathieu Kassovitz), is cheating on his new wife and exchanging purple prose-ridden emails and chats with his lover.

Happy End doesn’t bring anything particularly new to either Haneke’s body of work, or to the sub-genre of satires on the bourgeoisie. We already know that the world is cold and uncaring and that these people are worse. We already know how monstrous and hypocritical rich people are – and have often indulged in the cold comfort that comes from being able to laugh at them onscreen for a couple of hours. But what the film lacks in growth or innovation, it often makes up for in amusement. The Laurents’ twisted exploits are sharply written and beautifully realized, particularly when it comes to the next generation. Rogowski’s Franz is a shambolic mess who delivers a performance that manages to offer a portrait of a young man struggling with his wealth and privilege, even while he’s indulging in impressive physical feats. Harduin is quietly brilliant as Eve, mixing the character’s blasé malice with just a hint of unpredictable vulnerability.

The film’s status as a quasi-sequel to Amour also makes for its own compelling moments. As welcome as it is to have formidable talents like Trintignant and Huppert working with Haneke again, the reason for them to revisit these particular characters isn’t clear at first. The tone of Amour’s wrenching and unflinching portrayal of a couple facing a fatal degenerative illness is about as far away from Happy End’s blithe evisceration of the upper class as you can get. And the events in the latter don’t appear to be connected to the former in any meaningful way as they begin to unfold. Anyone who finds themselves wondering why Haneke didn’t make Happy End with an entirely new cast of characters should be advised to wait it out, though. There is a payoff later in the film that’s worth both Georges’ and Anne’s returns and the ongoing investment in their lives.

For all of its attributes, though, there’s something about Happy End that never truly elevates this fairly solid string of vignettes into a greater film. A Haneke who’s treading water is still a bizarrely entertaining filmmaker, but the fun is tinged with a hint of disappointment and a certain feeling of lost opportunity. The promotional blurbs for the feature that have described it as set against the backdrop of the European migrant crisis, for example, are incredibly charitable. In execution, this subtext amounts to little more than the occasional burst of background noise and cameos. This is likely quite accurate – that’s how little attention this sort of sheltered rich white family would pay to the situation – but it’s hardly enough to contribute to any greater statement or meaning. And compared to some of Haneke’s previous characters/victims, the Laurents almost seem to get off a little too easy.

As far as pitch-black dramedies about monetarily wealthy and morally bankrupt dysfunctional families go, you could do a lot worse than Happy End. It is funny. It’s filled with quality performances. It has the best/worst grandfather/granddaughter bonding scenes you’re likely to see this year. The only issue with the film is that it’s just good enough to make you wish that it was a fair deal better.