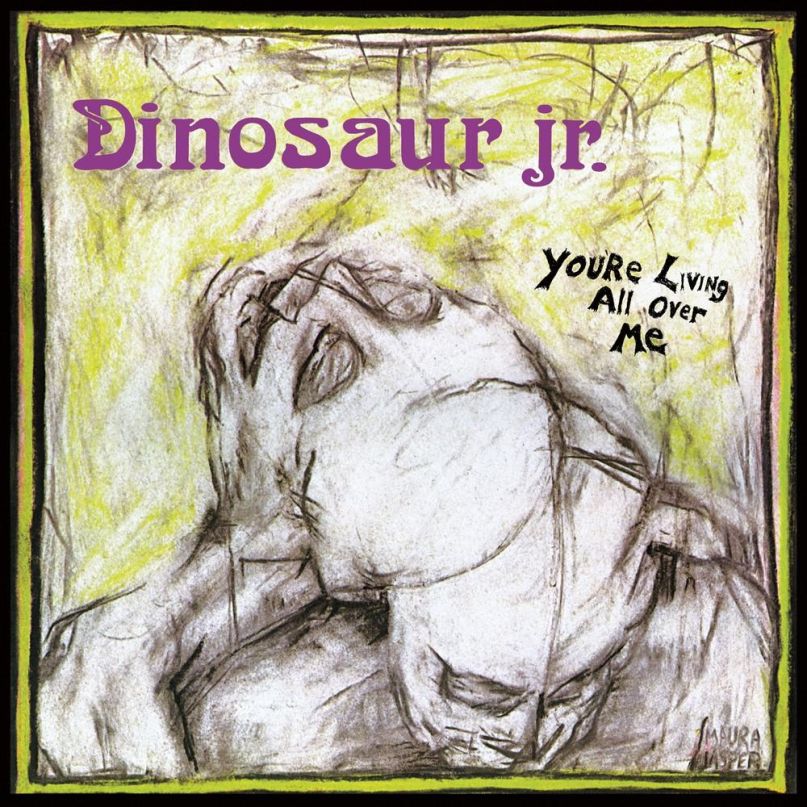 There’s a moment on You’re Living All Over Me that, if you’re not ready for it, will startle you. Actually there’s a lot of those moments, but J Mascis’ titanic guitar wail just over a minute into “Kracked” is the first, which by extension makes it the most effective. On the heels of a brief guitar interlude, Mascis uncorks a piercing solo that shimmers, shakes, and squeals for dear life. The distorted, wawa-infused fit comes at you so fast and with such urgency that your attention has no choice but to surrender to it. If it had hands, they’d reach out of your stereo and grab you, like something out of an indie rock version of Poltergeist.

If that all sounds like hyperbole or grand overstatement, you’re hereby challenged to play Dinosaur Jr.’s sophomore outing with some volume. It’s big, boisterous, and daringly epic, and not in the way records from bands like Zeppelin, The Who, or even more kindred spirits like Ramones were before it. On You’re Living All Over Me, Mascis, bassist Lou Barlow, and drummer Emmett “Murph” Murphy III delivered on their twisted vision of guitar rock heroism in full. At a time when the guitar solo had long become a rote, commonplace effect, Mascis reclaimed it as an act of majestic triumph. He didn’t reinvent the wheel, but he found some cool and unusual new ways to do burnouts on it.

You’re Living All Over Me is an ambitious, powerful, and undeniably messy-sounding guitar record, a fact that’s even more interesting with some measure of historical context. Despite what it might sound like, this wasn’t a record made by wayward, social misfits cast adrift. Mascis and Murph grew up in white-collar suburbs: Mascis in the picturesque college town of Amherst, Massachusetts, and Murph in Greenwich, Connecticut. Barlow, meanwhile, moved to the Western Mass suburb of Westfield when he was twelve. The band’s collective background was a far cry from the broken homes and fractured upbringings that helped give rise to many of their underground peers, but Mascis and Barlow nonetheless cut their teeth on early American punk and hardcore, playing together in the short-lived hardcore band Deep Wound. As Barlow told author and journalist Michael Azerrad in the latter’s spot-on indie rock tome Our Band Could Be Your Life, Deep Wound musically bonded through a love of speed metal and “wimpy-jangly stuff,” forecasting, in retrospect, what was soon to come with he and Mascis’ next act. But even then, a premium was placed first and foremost on volume.

When Deep Wound disbanded, Mascis and Barlow, now joined by Murph, carried their noisy-but-sweet ambitions over to Dinosaur Jr.. After one album recorded under the name Dinosaur on Homestead Records, the trio jumped ship to SST Records. Home to many of the band’s heroes, including Black Flag, the Minutemen, and Sonic Youth, SST played a critical role in solidifying much of what was happening in the American rock underground in the 1980s. This fact was not lost on the Dinos, whose ambitions at the time didn’t scale much further beyond finding their way onto the label. Whether the band felt the need to try and live up to the label’s high standard is unknown. But they not only met SST’s high artistic bar; they in many ways vaulted over it into uncharted new terrain. Between Mascis’ thunderous guitar runs, Barlow’s strummed bass attack, and Murph’s steady-yet-powerful drumming, Living embraced big, anthemic classic rock in a way that no other record in the underground ever dared to. If most punk, hardcore, and early American indie rock of the ’80s rose up in resistance to the showier, more extroverted impulses of classic rock, Dinosaur Jr.’s sound owed as much allegiance to Neil Young and Hendrix as it did Black Flag and The Stooges, and they weren’t about to shy away from it. In doing so, the band made the underground scene a much-less stodgy and insular place, while Mascis became the indie circuit’s first bona fide guitar God.

It’s impossible to ignore the noise on Living, but the band employs it in such a way that you don’t want to. In fact, by the record’s final song, the Barlow-sung acoustic track “Poledo”, you realize how much you miss the band’s pulverizing sound when it’s not right in your face. Dinosaur Jr treats sound and volume with an almost weird reverence on Living, almost like an unspoken fourth member. It doesn’t exist for its own sake, but rather serves a proper function. It’s right there from the outset of album opener “Little Fury Things”, which opens with Mascis’ wami bar and Barlow’s indecipherable screaming. The band gets into a molasses-thick groove on the aptly titled Sabbath nod “Sludgefest”, but the song’s best moment comes at the four-minute mark when Mascis makes his guitar sound like the master tape’s being eaten. When the trio isn’t going to the woodshed on its own tunes, it’s making glorious chaos out of others’. “Just Like Heaven” (included as a bonus track on the record’s re-release) was a perfect piece of melancholy pop rock before the Dinos littered it with distortion, effects, and an intense metal breakdown at the chorus. Still, their version has become as much theirs as the original is The Cure’s.

If all Living had to offer the world was an intense exercise in sonic boundary-pushing, it still would be worth canonizing as a classic. But beneath the layers upon layers of sound is a pop record fighting for air. The record’s nine tracks are as melodic as they are loud, and its ability to split the difference made it one of the earliest precursors to the alternative and grunge movement of the ’90s. No one track better walks the line between pop songcraft and hardcore voracity than “The Lung”. Its relatively tidy song structure makes it arguably the record’s most accessible song. Mascis, meanwhile, comes as close as he gets to actual singing by halfway breaking free of his famed laconic speak-sing. On “In a Jar”, Mascis tones his guitar down largely to a treble, letting Barlow’s bass fuzz take front and center. Elsewhere, there are plenty of other light touches that give the record an added dose of pop sophistication. If you listen carefully, you might pick up on the tambourine during the breakdown on “Little Fury Things”.

Despite how cohesive and locked-in the band sounds on its second record, relationships between the band members were anything but. Dinosaur Jr. has always been famously non-communicative, and that inability (or unwillingness) to get on the same page with one another would ultimately bring the classic Dino lineup to a bitter end. Mascis reportedly never needed much of anything from Barlow and Murph beyond their musical services. Barlow, meanwhile, withdrew and grew embittered by his inability to win Mascis’ approval. Somewhere in the middle was Murph, who when not acting as a mediator between his two band mates had his own issues with both of them himself.

A more dysfunctional band you’re unlikely to find, but the trio poured all of that frustrated energy into its savage masterpiece. The things its members couldn’t say to one another bled over into the music. Mascis’ hazy monotone vocals often get buried under the band’s musical mayhem, almost as if he’s deliberately trying to hide his true feelings. But when you spell it all out, the lyrics on Living are anything but opaque. “I know what you did to me/ I know what you did was wrong,” Mascis sings longingly on the brokenhearted “Raisins.” The anger is reciprocated by Barlow, who penned the record’s final two tracks, “Lose” and “Poledo”. On the former, Barlow takes his anger out on himself in a self-loathing fit (“To think the focus just belongs to me,” he sings. “Selfish man, I know I’m nothing to me.”). But the bassist takes dead aim at Mascis on the lo-fi album closer, “Poledo”: “I know I’m guilty/ My stomach always hurts/ Milking your attention/ For the little it is worth.”

Scores of bands waiting in the wings would eventually ride Living0p’s formula of huge sound and pop melodies to breakthrough success in the wake of Nevermind. Sadly, though, Dinosaur Jr.’s initial run proved too volatile to last. By the time of 1988’s Bug, Barlow and Murph resorted largely to staying out of the way as Mascis assumed complete creative control of the band. Barlow was fired in 1989 while Murph quit prior to the recording of 1994’s Without a Sound. But through that tension the band made something truly great. Living might be the work of a band hanging on by the thinnest of threads, but that desperation in large part propelled one of the most brazenly out-sized rock records of the past 30 years. Great art isn’t always pretty, but every once in a while we get something far better. In the case of You’re Living All Over Me, it’s a goddamn beautiful mess.