"I'm sorry, but is anybody else hearing Hootie and the Blowfish like very, very softly?" 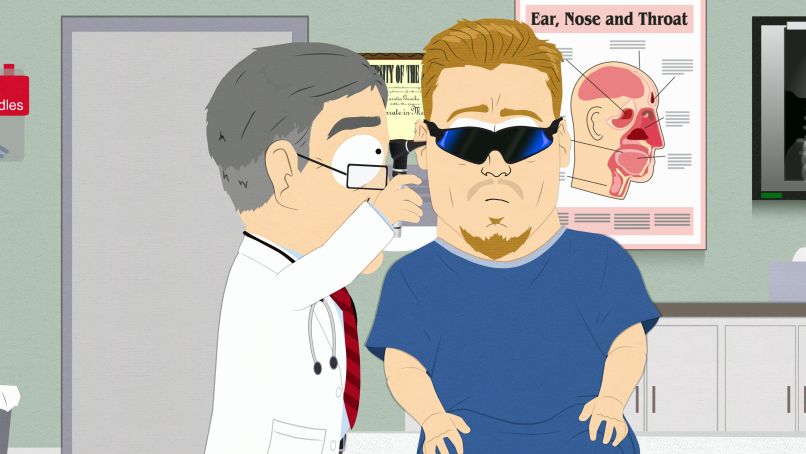 Maybe it’s telling that I didn’t really mind not having a South Park episode last week for the holiday. Hey, I’m not trying to be a Scott Malkinson here (Ooh, I’m Scott Malkinson; I have diabetes.), but after a strong start to Season 21, it’s been difficult to watch the show struggle most weeks to build any real momentum. Even after a season-saver like “Doubling Down”, Trey Parker and Matt Stone inexplicably sabotaged an episode where Heidi Turner (so smart, so funny, get over yourself) had out-Cartmaned Eric Cartman and Jimmy and Timmy found themselves racing for scientific discovery against old Looney Tunes adversaries Nathan and Mimsy — all so they could tie into the NFL’s attendance woes. Did any of us need them to go topical at that point? Did any of us need to see Jerry Jones as a South Park character … ever? But, as always, hope shines eternal on our favorite quiet, redneck mountain town with two episodes left in the season.

It’s time to get PC … Principal, that is.

Allegations of sexual misconduct in the world of entertainment, journalism, and politics have revealed just how pervasive and deep-rooted the problem is in American society, and South Park Elementary is by no means immune. In an effort to curtail bullying and insensitivity, progressive school leader and all-around solid bro PC Principal hires the like-minded Strong Woman as vice principal (“You really think I couldn’t have handled that myself?”). But what’s to be done when PC finds he has “Hold My Hand”-type feelings for a strong woman like Strong Woman? Hootie doesn’t lie, but both PC and guidance counselor Mr. Mackey know that workplace relationships are totally playing with fire. Luckily, HR (no, not Hootie Removal) representative Ms. Heather Conduct (drop the Heather, push ’em together) pays a visit to remind the faculty of how to negotiate the perilous waters of workplace romance. M’kay? M’alright?

We all remember the side effects that accompanied Stan’s maturation: everything sounded like, tasted like, and smelled like shit. Well, Kyle, like all of us, finds himself actually in a world of shit: a place where Cartmans are cloning, Giant Douches are presidents, and Terrance & Phillip are still farting on small children and innocent minorities — only now streaming on Netflix. But who’s to blame? North Korea, Saddam Hussein, the 1987 Denver Broncos? No, Canada — the filthy, beady-eyed, head-flapping nation of buddies, pals, and guys to our north who exported T&P’s crude brand of flatulence humor to America so many years ago. When his friends and even Vice Principal Woman don’t get behind his crusade to end fart cruelty, our favorite Jewish mother (Heidi is totally funny, you guys) um, I mean Kyle, seeks out those who will join him (hint: it ain’t Leonard Maltin and Robert Smith), and the situation escalates, buddy.

“I’m going to make a difference. It’s going to feel real good,” Kyle yells at Stan, but how exactly do we go about doing that in the era of Giant Douche? Do we escalate trivial matters, like our president (note: Tweek warned us), and nuke Canada? Or are we able to look ourselves in the mirror and practice some genuine accountability for how shitty things are? Parker and Stone, though far from their funniest, do point out how quick to overreact and assign blame our society has become rather than practicing common sense and personal responsibility. There are very real problems out there. As long as power structures exist, there will be abuses of power and even aging culprits like Terrance & Phillip there to blame it on “the olden days,” and these issues need dealt with seriously. But that doesn’t mean we can just shut down. Yes, human beings will still be attracted to each other, and workplaces will remain places where adults have to handle those basic feelings. But when did that become so difficult? As Mr. Mackey and Ms. Conduct prove, we don’t have to shut down as people and lean on rigid PC culture to prevent problems. We need to get back to understanding that there are monsters out there who must to be dealt with, and, as for the rest of us, we simply need to fall back on the concept of being decent human beings. That means listening a little more, respecting boundaries, and, for the love of Louis, never pulling out our penises ever. Somebody get the memo to Butters.

Episode MVP: Our favorite, self-reflecting Jew, Kyle, has finally achieved his destiny of becoming his mother. He’s blamed Canada, Terrence & Phillip specifically, for all of America’s societal woes and started a nuclear war. Things look dark, buddy. Don’t call me buddy, friend. I’m not your friend, guy … so it goes.

Best Moment: The nervous Mr. Mackey and Ms. Conduct lightening up and acting like authentic, respectful people around each other as the rest of the faculty look on like visitors at a zoo, pushing their faces up to the glass and marveling at the strange behavior. Note, at no time did Mr. Mackey refer to or present his penis. He also opted against wearing only a bathrobe.

The Quotable South Park: “What do I want? I want a world where laughter doesn’t come at someone else’s expense, where people can live freely without being farted on. I want a world where you aren’t ridiculed for trying to help, a world where a nice girl that I liked isn’t turned into another Eric Cartman. These Canadians are in the way of that world, and everything they do and everything they’ve done needs to be erased from the Earth!” Oh, Kyle, you do make speeches. I think we got a “little chub,” too.

Song of the South Park: Who doesn’t want to hear Hootie in the Blowfish when they fall head over heels for someone? Two decades later, Hootie remains the soundtrack to the modern man’s heart. Just don’t ask us the lyrics.

Oh, My God! They Spared Kenny: Not being Canadian, Kenny and all the Baldwins survived this episode.

I Learned Something Today: I learned that Kyle still has a lot to learn today.