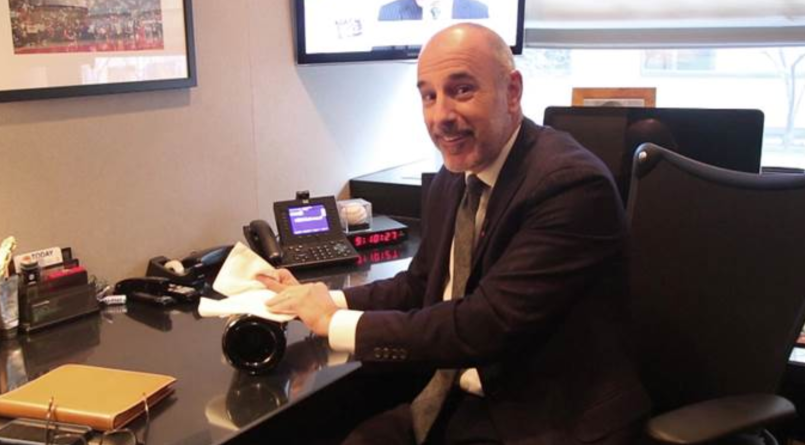 Earlier today, longtime TODAY anchor Matt Lauer was fired by NBC following allegations of sexual misconduct. Variety has now published a detailed account of some of the accusations levied against Lauer.

More than 10 women spoke to Variety’s about Lauer’s behavior during his tenure at TODAY. He is said to have gifted a colleague a sex toy with a note about how he wanted to use it on her; he is also alleged to have reprimanded an employee after she declined to engage in a sexual act; and he frequently asked female employees about their sex lives, according to Variety.

Variety also notes that Lauer often engaged in sexual activity while at work. “His office was in a secluded space, and he had a button under his desk that allowed him to lock his door from the inside without getting up. This afforded him the assurance of privacy. It allowed him to welcome female employees and initiate inappropriate contact while knowing nobody could walk in on him,” according to two women who spoke to Variety.

Many of the women said Lauer’s behavior was an open secret at NBC, but network executives only began to take the complaints seriously in the wake of sexual misconduct scandals involving Harvey Weinstein, Louis CK., and Charlie Rose. “Management sucks there,” one former employee told Variety. “They protected the shit out of Matt Lauer.”

Update – November 30th: Lauer has issued a statement apologizing “for the pain I have caused others by words and actions.”

“There are no words to express my sorrow and regret for the pain I have caused others by words and actions. To the people I have hurt, I am truly sorry. As I am writing this I realize the depth of the damage and disappointment I have left behind at home and at NBC. Some of what is being said about me is untrue or mischaracterized, but there is enough truth in these stories to make me feel embarrassed and ashamed. I regret that my shame is now shared by the people I cherish dearly. Repairing the damage will take a lot of time and soul searching and I’m committed to beginning that effort. It is now my full time job. The last two days have forced me to take a very hard look at my own troubling flaws. It’s been humbling. I am blessed to be surrounded by the people I love. I thank them for their patience and grace.”