How Hey Arnold! Opened the Minds of a Generation of Nicktoons Kids

A look back at the less-heralded zenith of the Nicktoons era, as it prepares to (finally) wrap up 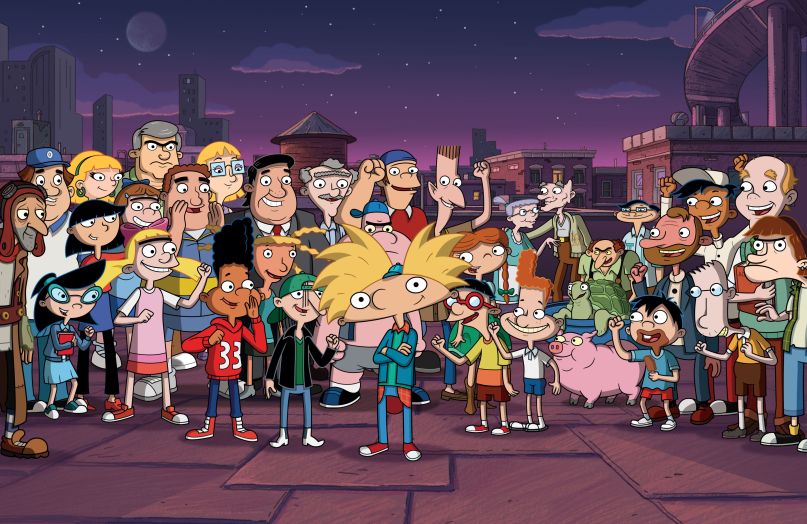 During the eight-year run of Hey Arnold! on Nickelodeon, from 1996 to 2004, creator Craig Bartlett managed to do something that very few stories aimed at children ever accomplish: create a world that allows for a better understanding of reality, without sanding off many of everyday life’s scarier edges. The show’s starry-eyed version of New York City might have been a generally kind and friendly place, but like any city (or anywhere, really), it wasn’t without its own tragedies and traumas and fits of adversity. From P.S. 118 to the Sunset Arms boarding house, Arnold and his coterie of eccentric friends offered lessons in everything a kid could need to know for the sake of surviving in this world.

This weekend, Hey Arnold!: The Jungle Movie will finally bring closure to the show’s lingering loose ends, including the biggest one of all: what exactly happened to Arnold’s parents when he was left at the Sunset Arms as a baby? While it’ll hopefully offer a satisfying sense of closure to the show, the ambiguity with which the series left off after its 100 episodes has long felt just as appropriate to the spirit of the series in its own way. Arnold may never have solved the riddle of his parentage, but that note felt authentic to the time in which the show existed. The ’90s were full of latchkey kids, with working and/or absent parents, and Hey Arnold! was a show about how their lives weren’t abnormal, but instead universal.

Kids would go out with their friends and wander the streets in the pre-internet age of parents being able to geolocate their brood to an exact position and get into all manner of adventures. They’d have to work things out for themselves and form their own strange urban legends about how the world around them actually works in an attempt to rationalize it. Everybody has these; in the same way that Gerald acted as a sort of gatekeeper of the strange half-truths of the show’s city, everybody knew that weird kid who insisted that his dad worked for Nintendo or the other kid who swore that somebody lived in the woods out behind their apartment. This was how things once worked; the absence of so much knowledge meant working a lot of things out for yourself. Bartlett captured this through a mixture of innocence, skewed comedy, and the occasional Very Special Episode that would see the series address some genuinely painful material with a candor not otherwise present in Nicktoons of the time.

Perhaps the best testimonial to the show’s enduring fandom, at least among a certain age group, is how it really does appreciate with time in a way that few ’90s kid curiosities do. The show is charming at a younger age, and at an older age, you start to notice how Helga’s mother had an alcoholic’s tremors and perpetual malaise, Arnold’s flatmates Oskar and Suzie lived in a borderline-abusive relationship, and Stoop Kid was a 15-minute tragedy of child neglect unto himself. It’s a show about the magic of being a kid and having all the time in the world to kill, but it’s also a show about lonely people searching for connection in the big city. Hey Arnold! owes some spiritual debt to Richard Linklater’s Slacker, in the way that it toys around within an urban space as a sort of existential sandbox. It wanders from character to character, sometimes spending entire episodes with a fringe player just to glance into their world and see where they come from and what makes them tick. From the oddest kids at school to the shop owners at the end of the block to even a washed-up lounge singer, the show’s empathy was boundless. It made the case that everybody has a story worth knowing, everybody comes from somewhere, and nobody is simply the outwardly facing version of themselves.

Some of the best storytelling emerged from these contained episodes. Arnold went home with Sid and discovered that not every kid at school has a technologically advanced bedroom with a skylight. Mr. Huynh lost a daughter to the Vietnam War. That funny, little kid who likes chocolate had an addiction problem and wanted help while being almost entirely unable to control himself. One classmate was struggling with his faith in Judaism and another with the pressures of academic over-achievement and family expectations. The show grappled with class, domestic trouble, the humiliations of youth, and the loneliness of adults with an adept hand, always treating the audience with respect even as the delightfully cartoonish hand-drawn animation kept its stories accessible. But Hey Arnold! stands up to latter-day scrutiny as a show that may have dealt in caricature, but always saw the people beneath them. It opened a window to a bigger and more diverse world for kids, who may never have come anywhere near an actual city, and asked them to relate to people they’d never met before.

It may not be the best-remembered show of the Nicktoons era, or even the most widely admired at the time, but Hey Arnold! was a show of rare depth, one that could switch from lighthearted stories about the perfection of an imperfect Saturday to meditations on the difficulty of confronting and processing the death of a friend with effortless ease. It understood and was able to translate how the world is simultaneously overwhelming and claustrophobic at a certain age and made that not only palatable to a young audience but exciting. After an episode, you wanted to learn about your own area’s folk legends, fall in love at the carnival, help that unconventional old woman down the street that your neighbors didn’t understand, and find something new in even the most familiar places around you. It made the act of discovery feel bold and new in a time where so much of the surrounding pop culture was becoming marked by irony and sarcasm. It was earnest, back before earnestness became a semi-derided cultural marker, and it makes it one of those childhood shows that an adult wants to share with their own kids, somewhere down the line.