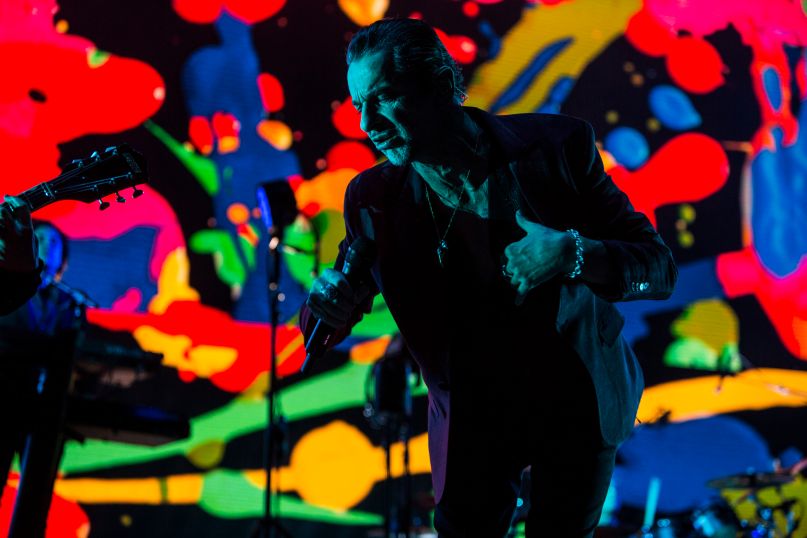 Of all the things you worry might not be passed down to new generations of musicians, one that perhaps gets omitted is the ability to really wiggle one’s arse. No one wiggles arse quite like 55-year-old Dave Gahan. On night one of a record-breaking four sold-out Hollywood Bowl shows in LA as part of Depeche Mode’s Global Spirit Tour, Gahan stirred up the types of ungodly shrieks from crowd members that Harry Styles induced over at The Greek theater just two weeks ago. He was a man of few words tonight and mainly let his arse, and his band’s pulsing, booming, driving music, do the talking. There’s also the small matter of his style. Gahan couldn’t possibly say anything as striking as his physical presentation. His array of waistcoats show off his iconically tattoo’ed arms; his mustache gives him a Groucho Marx comedic edge. Mainly it’s those hip thrusts and bum shimmies. For a man who had a heart attack onstage in 1993, the extent of them is almost dangerous.

The female overreactions must be quite annoying for his bandmates Martin Gore and Andrew Fletcher. Gahan’s evergreen sex appeal always threatens to take the spotlight away from the fact that the Mode have one of the strongest back catalogs around. It’s untouchable and has built a legion of extraordinary fans. That tribe continue to expand as future Mode fans are born every year, hence tonight’s audience spanning all the generations. Their influence can be felt throughout the genres, too. Tonight’s display of delectable synth lines, throbbing drums, and singable guitar riffs are the blueprint for so many of today’s currently active bands: from Chvrches to Nine Inch Nails, The 1975 to Marilyn Manson. These three lads from Basildon, Essex, revolutionized pop music and built an army of goth freaks and weirdos while they were at it.

Thousands of those disciples turned out tonight in various Depeche Mode tour t-shirts from the past four decades. Opening for them, LA’s Warpaint provided their own rhythmic, driven goth psych to warm up the audience’s hips. “Get ready for Depeche Mode,” said vocalist Emily Kokal. “Your arms are gonna be sore tomorrow.” It’s Gahan’s arms, however, that tee’d out like Christ on a cross between numbers. Opening on a track from the new album called “Going Backwards”, Gahan kicked off an evening where he played lewd dictator in charge of a full-scale, synth-led rebellion. Spirit is their 14th LP and one that speaks to the current times we live in. When performing its lead single, “Where’s the Revolution”, the screens behind threw out cartoon clenched fists. It’s apt that the band were pre-empted by The Beatles’ “Revolution” tonight over the PA system. Depeche Mode did create a revolt of their own when they broke America in the 1980s, and this evening’s set was almost a protest to prove how they’ve stayed relevant in the decades afterwards. That’s why the focus was on the new record and their late ’90s and 2000s catalog.

That’s not to say there aren’t massive peak-Mode crowd favorites, too. The first being “World in My Eyes” from Violator, which Gahan performed while touching his crotch and thrusting it at the drum riser. Everyone screamed when Martin Gore took lead vocals on “A Question of Lust” from 1986’s Black Celebration. “Martin Gore, baby!” shouted Gahan on his return. At the end of Gore’s take on late ’90s number “Home”, Gahan led the crowd in their first acapella sing-song. “Not bad,” he said. “Not good.” The crowd laughed. “Oh Hollywood,” sighed Gahan. “You really are the best.”

Seventy minutes into the set, Hollywood didn’t disappoint him either, jumping out of their seats as the elongated intro to “Everything Counts” wrapped its arms around the open-air arena. “Take it away boys!” shouted Gahan while adopting the stance of a pouting starfish before doing the funky chicken dance. The run of “Stripped”, “Enjoy the Silence”, and “Never Let Me Down Again” after that was a good intimidation tactic for any synthpop band who thinks it can run away with Depeche Mode’s crown any time soon. Most bands are lucky if they even have that opening riff from the latter, and Gahan doesn’t even need to sing “Enjoy the Silence”. The audience do it for him.

As part of an encore that included “Personal Jesus”, the frontman paid tribute to David Bowie with a version of “Heroes”. It was a strange but welcome moment, a chance to reflect on a man who undoubtedly changed the face of pop music forever. The side-effect was that it reminded us that some living legends are still present to shake their bums like there’s no tomorrow.