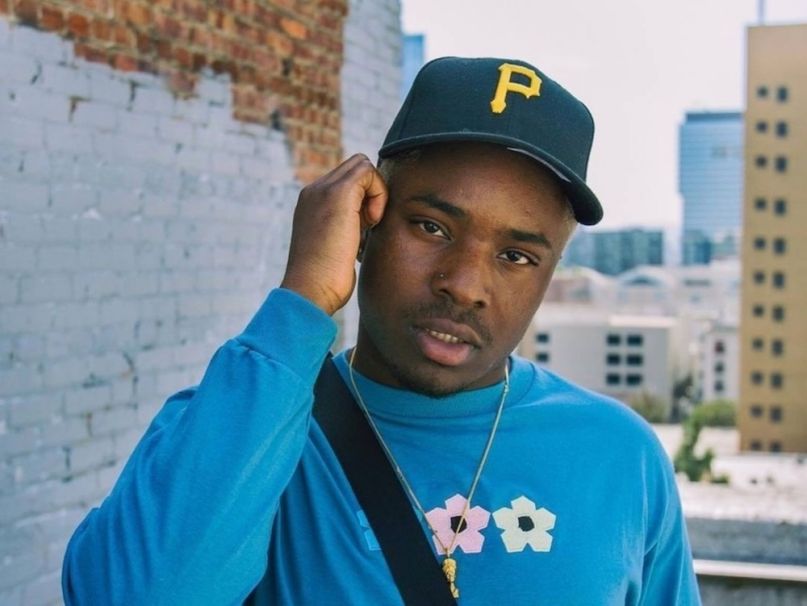 Track by Track is a recurring new music feature in which an artist offers a comprehensive rundown of their new album.

Maryland rapper IDK is poised to break through and open more eyes to his versatility as an artist and hip-hop storyteller. Earlier this year, his buzzing mixtapes, SubTrap and Empty Bank, earned the musician fka as Jay IDK an opening spot for Isaiah Rashad on his “The Lil Sunny” tour. Meanwhile, he was hard at work on his soundtrack LP, IWASVERYBAD, which is out today via HXLY, LLC/Commission Music.

Rolled out through three installments in partnership with Adult Swim, the concept album will have an accompanying video for each track. It showcases IDK’s “different version of street life” that other artists “don’t really touch on.” By that, he means “middle-class kids that do bad things even though they don’t have to.”

The autobiographical project covers IDK’s middle-class upbringing in Maryland, where he once succumbed to the allure of the streets before turning his life around. To assist him with telling the real-life narrative, IDK recruited DOOM, Swizz Beatz, Del the Funky Homosapien, and Chief Keef. Throughout the project, the MC demonstrates his ability to straddle the lines between hip-hop and R&B with ease. It’s a perfect balance that IDK believes sets him bars above his contemporaries.

“People need to stop sleeping on me,” IDK tells Consequence of Sound. “I know I’m one of the best. It might take the world a bit of time to realize that.”

Stream IWASVERYBAD below to find out for yourself.

For more insight on how IDK put IWASVERYBAD together, he’s broken down the project for our latest Track by Track. Read on to learn how the Maryland rapper brought his collaborators into the fold, how his mother became a source of motivation, and why he considers himself one of the best rappers out there.

“Mrs. Lynch, Your Son is the Devil”:
[The voicemails] are all reenactments of things that would’ve happened to me when I was younger. I just got a bunch of people to come in. Some of them were just random people who weren’t really necessarily professional actors, but they did a really good job. I thought about that concept before the song was even recorded. I knew that’s what I wanted to be the beginning of it.

“Maryland Ass N***a” (featuring Swizz Beatz):
[The narrative] is a 100 percent me. Everything in that song, everything in this album is me — I’m rapping from my perspective. I always wanted [Swizz Beatz] on there, like right away when I made it. I played him a bunch of other stuff [in the studio] and I played him “Maryland Ass N***a” and he said, “Yo, that shit is crazy.” After that, I asked him if he could get on it. He said, “Yeah, it’s done.” The next day he called me back into the studio again and he just freestyled it. He did four or five different hooks. I just took pieces of each one and put it together to make that one.

“Pizza Shop Extended” (featuring Yung Gleesh, DOOM, and Del the Funky Homosapien):
I wanted DOOM and Del on it immediately. I didn’t think I would get both. I reached out to Adult Swim and said I wanted DOOM. I sent [them] the song, and they hit me back like two days later and said, “DOOM liked the song. I think he’s going to do it. I don’t know, I won’t make any promises, but I think he’s going to do it.” After DOOM did it, the next week I heard Del liked the song and I was like “Damn. I’m not going to have enough space for both verses.” DOOM’s verse originally was really long. It was like 24 bars, so I had to cut it down to put both of them in. That’s why DOOM’s verse was so short. I wanted to make sure I fit both in.

“Dog Love Kitty” (featuring Mother Marygold):
That was another premeditated record. I always knew I wanted somebody to sing. It’s funny, I knew I wanted Marygold to sing. It was between her and Little Simz. I told her, “I want you to say, ‘Drop down low, then pick up, pick up/ Put your hands in the air, it’s a stick up, stick up.'” And then I actually took her voice, put it in Pro Tools, and I used it over for when the beat says, “Hands in the air/ hands, hands in the air” — all that stuff — and did that myself because I didn’t have an engineer. He was MIA at the time, so I had to learn how to use Pro Tools myself and I was just putting it together like that. I like that song a lot because it’s me kind of saying that my friends kind of influenced everything that I do — even the way I treat women.

“Mama Said ‘Respect the Venus Symbol’ I Didn’t Listen”:
That’s one of my favorite ones because it’s so weird. Somebody [pressed] a button and it kept doing “doo doo doo doo” — like that sound. It was some random sound. I was like, “Yo, we should take this shit and make something out of it.” So we put it in a section by itself and then I just kept saying, “Mama, that ain’t my girlfriend, that’s my bitch.” I wanted to connect together how I was talking to women because that’s part of how I was very bad. I used that piece to do that. When I get slapped by mother at the end of it, it’s a backward record. Rewind it, if you reverse it, you’ll hear some shit.

“Windows Up”:
Ludacris actually had to listen to it and approve it before I could put it out [because I used lines from “What’s Your Fantasy” in the hook]. For the actual verse, I took my time on that one. I wanted to make sure I spoke what I wanted to speak about and get the point across, which is me basically convincing a girl to sleep together even though we’re not in a relationship. But, I wanted it to be sing-alongable and still easy [to understand]. That’s one of the things I’ve really been working on the most — making my music songs you could sing along to. There are some records when I’m going to rap, rap, rap, but the challenge is being able to tell your story in a way where it’s commercially acceptable but you’re not actually trying to be commercial.

“Birds & the Bees”:
“Dog Love Kitty”, “Windows Up”, and “Birds and the Bees” are in reverse chronological order. “Birds & the Bees” is me convincing a girl to have sex with me, and she’s like, “I’m chilling. I’m not trying to do that right now.” I’m talking about the same girl in all of them.

“17 With a 38” (featuring Chief Keef):
I knew I wanted Chief Keef on it right away. When I heard the beat, that’s just what came to my mind. So I hit his uncle because I was cool with his uncle. He always liked me, he always fucked with my music since day one. Very early, early. Months, months, months later, I hit him up again like, “It’s about to be the end, I’m really trying to get [Keef] on there.” He hit him up — [Keef] had just dropped his album. I was in LA and he was in LA. I was supposed to go to the studio with him. Shit happened, and I couldn’t get there, I had to leave. He ended up doing the verse three weeks later and sent me that joint. He did it the first time and didn’t like it, so he scrapped it and did it again and sent me the new verse. The new verse was really good. He was really trying to rap. I don’t know if he was trying to keep up with me or what.

“No Shoes on the Rug, Leave Them at the Door”:
I made that on tour. I was in a green room when I recorded that one. It was a really heartfelt record for me because it was really the first time I was really explaining my story. The weird part about it is that I didn’t know really know that about my life until I wrote it. It’s why I became who I became. It was almost like an out of body experience — that’s a lot of these songs. I didn’t even know how intelligent some of these lines are and then I listen to them back, and I’m like, “Damn, I didn’t even know my mind thinks like that.” It’s almost like another person is making on the record.

“No Words”:
If you notice, “No Shoes on the Rug” is a conversation from jail that I’m having with myself and my mother. The reason I went to jail is because someone told the police where I was hiding. So that was pretty much what “No Words” is — me kind of acknowledging that’s how I went to jail. It’s very self-explanatory. You can’t trust nobody. You think they’re your friends, but they might not be your friends for real.

“Black Sheep, White Dove”:
I never really had a close relationship with my mom. When she was about to pass away, that’s when I started looking at things differently. I started to realize how much she actually really did love me. So that song is pretty much me acknowledging that — telling people how I actually felt about my mom. I acted like I didn’t care, but deep down I definitely cared. I tried not because I always knew she was going to pass away, but they tried to tell me she wasn’t. The second half of it was how I realized after she died that I use what she did and who she is as my motivation. I was the kid that everybody thought was bad. My family never wanted their kids around me. It was serious. That’s why I said, “Who would’ve thought it would be Julia’s bad son?” I made something out of nothing.

“Baby Scale” (feat. Yung Gleesh):
It’s not really part of the story. It’s just me saying, “I’m the best rapper.” People need to stop sleeping on me. I know I’m one of the best. When you say things like that in your music, and you mean it, people believe it. “Baby Scale” is just about balance. I just did a song with Gucci [Mane] and [Lil] Yachty, but then I’m doing a show with Nas and Joyner Lucas. I can get on a song with Nas and Joyner Lucas and do just as good as the song with Gucci and Yachty. I have a rare ability — my level of writing is not like everybody else. I’m able to do many different styles of writing. If you listen to this project, all of the singing is me. Even on “Birds and the Bees”, those are my lyrics. I sang them along with that girl who was on it. I know that. The world just don’t know that yet and they will soon.