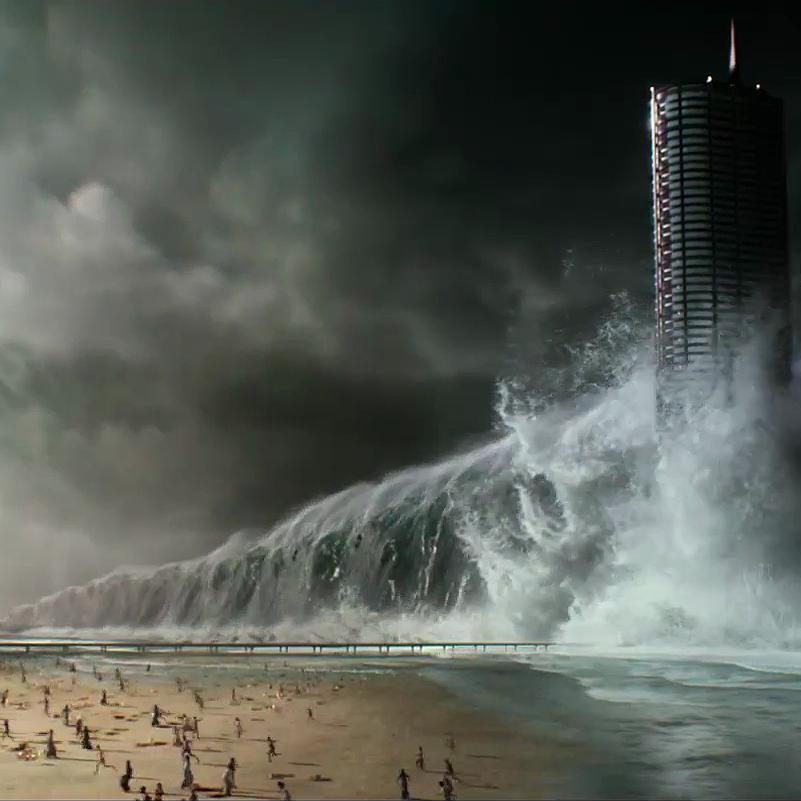 Even within the pantheon of American disaster movies, there are films which elevate the genre and there are films that confirm the worst suspicions of skeptics. Every so often, you get an Independence Day, a film which uses the cinematic language of bombast to speak to something oddly poignant about the power of unity. Far more often, you get the incidental absurdity of vehicles like San Andreas or 2012 or any number of disaster “classics” going back to The Towering Inferno and other luminaries of the early era. It’s hard to deliver an unironically enjoyable disaster movie; to consider the gravity of the destruction caused is to cast a pall over what’s supposed to be a genre that allows for escapist tales of survival against impossible odds, at its best. To take it too seriously is to misunderstand the foundation on which it’s built, one of optimism pitted against the fetishistic joy of watching an unseen, unforgiving god of destruction lay waste to so many global cities like a kid demolishing a LEGO metropolis at the end of the day.

Geostorm finds itself in the curious position of simultaneously taking itself too seriously and not enough so. It’s a disaster movie far too ridiculous to generate any real gravitas, but it’s also just glum enough to suck any fun out of watching the beaches of Rio de Janeiro freeze over in an instant. Despite positioning itself as the disaster movie to end all others, a tale of a storm so chaotic that it would irreparably alter the topography of Earth as we know it, Geostorm makes the critical error of sacrificing that sense of play, leaving it in a position where the only lasting takeaways are that the accents are bad, the filmmaking is worse, and the missed opportunity the film represents may be its most egregious failure of all.

In 2019, as declared by a narrator who disappears until the film’s last moments and feels surreptitiously tacked on as such, the planet is in a state of crisis. Climate change has caused massive storms, unthinkable death tolls, and all manner of destruction, which the film illustrates with a series of time-lapse disaster videos and one sustained image of lonely polar bears. In response, the global community joins forces to repurpose the International Space Station as the “Dutchboy,” an orbiting hub through which an interconnected grid of globe-spanning satellites can be deployed to change the weather, so as to prevent any cataclysmic storms in the future. If a Category 5 hurricane is brewing, a batallion of small bombs is dropped to break up the cloud formations. If excessive heat or cold overwhelms a region, the satellites can return the atmosphere to a place of relative normalization. With the best minds from around the world manning the ISS, Earth now enjoys a time of previously impossible prosperity, as natural disasters are seemingly now a thing of the past.

The peace only lasts until a military unit in Afghanistan discovers a village, in the middle of desert, killed off instantly by a freak ice storm. Soon the streets of Hong Kong grow hot enough to instantly fry an egg, scientists aboard the ISS are mysteriously being ejected into space, and the American government is left to work out what’s wrong with the station before control is ceded to the global community in a matter of weeks. (Why the U.S. has sole power over the satellite grid is just one of the many questions raised by the film’s premise that Geostorm has absolutely no interest in exploring at further length.) A more darkly playful film could have run for miles with a premise that essentially lends the filmmaker carte blanche to wreak any kind of havoc on the planet that a nutty Hollywood screenplay could dream up, but mega-producer Dean Devlin (in his directorial debut, sadly enough) stops far short. Long stretches of Geostorm omit any kind of weather-based chaos at all in favor of chasing after its many uninteresting human protagonists, sidelining the main event promised by the title in favor of attempting to earn investment in paper-thin character types.

See if you can piece together exactly where the film goes from those types alone. Jake Lawson (Gerard Butler) is the mind behind Dutchboy, a brilliant scientist whose only downfall is his incorrigibly roguish demeanor. After being kicked out of his own space station for insubordination, he’s left estranged from his brother Max (Jim Sturgess), a high-ranking government official who oversees Dutchboy in his stead. When the malfunctions begin, Max is told by President Palma (Andy Garcia) to find “one man, who we can control” to quietly repair the station before the international handoff takes place and the nation at large is embarrassed. Before long, Max’s best-laid plans come undone, and he’s left to rely on the help of the Secretary of State, Dekkom (Ed Harris), and his clandestine Secret Service fiancee Sarah (Abbie Cornish) to help Max unearth Dutchboy’s secrets before the planet is overwhelmed by the titular cataclysm.

The beats are familiar enough. Max and Jake have to repair their estranged relationship. Max has to solicit help from an eager government hacker (Zazie Beetz), and Jake has to put aside his lone-wolf tendencies in order to coexist with the ISS’ current director, Fassbinder (Alexandra Maria Lara). On the ground, suspicions begin to arise around President Palma and his possible involvement in the increasing number of deadly malfunctions. Jake’s ragtag pan-ethnic crew cracks excruciating jokes while attempting to help him undo the damage before it’s too late. In the grand tradition of disaster movies, both a dramatic countdown clock and an adorable dog in peril both enter the proceedings before the film’s end. All the while, Devlin neglects to put the storm in Geostorm, filling far too much space between disaster sequences with tedious banter and flat emotional moments. If you forget by the end of the film about Jake’s daughter (Talitha Eliana Bateman), don’t fret; Geostorm does as well.

Even the destruction, the ostensible reason for the film’s whole existence, is surprisingly dull. Devlin helms the disaster sequences with a remarkable lack of panache, fusing a derivative assemblage of massive tidal waves and tornadoes with some strikingly poor CG. To complain about the science in a movie about space-controlled weather feels like a fool’s errand, but the film’s internal logic is so genuinely poor that you’d be forgiven for letting your mind wander from the tiring story to consider exactly how and why a giant ray of heat would be able to shoot through the atmosphere and accomplish anything other than the eventual destruction of Moscow that it achieves. Whatever shreds of quality might have been mined from a reportedly troubled production are lost in a fugue of increasingly laughable editorial choices, as entire blocks of story are omitted, key characters disappear for protracted periods of time, and the whole of Geostorm seems to be sprinting to its own finish, as flagrant a ripoff of Gravity‘s moving climax as you’ll see in theaters this year.

To be sure, there are pleasures here for those who prefer their bad movies triumphant in their failure. Government officials reveal rocket launchers in the trunks of cars, inexplicable potshots are taken at the Democratic party, and Butler delivers a gruffly complimentary “you son of a bitch!” with nary a wink to be found. But these brief moments of knowing camp are undercut by the sense that Geostorm went terribly awry somewhere along the way, much like its hazardously assembled space station. (For an apparatus built to withstand any kind of failure, it’s eventually demolished with astounding ease.) Devlin’s debut aims high, but instead sees him deliver the poorest man’s rendition of a Roland Emmerich film possible, and given that Devlin cut his teeth on features like Independence Day, it’s almost impressive how little he seems to have picked up on his own. Geostorm will offer the bits of campy fun that some will desire most from it, but as a disaster movie, it’s an almost entirely unmitigated fiasco.