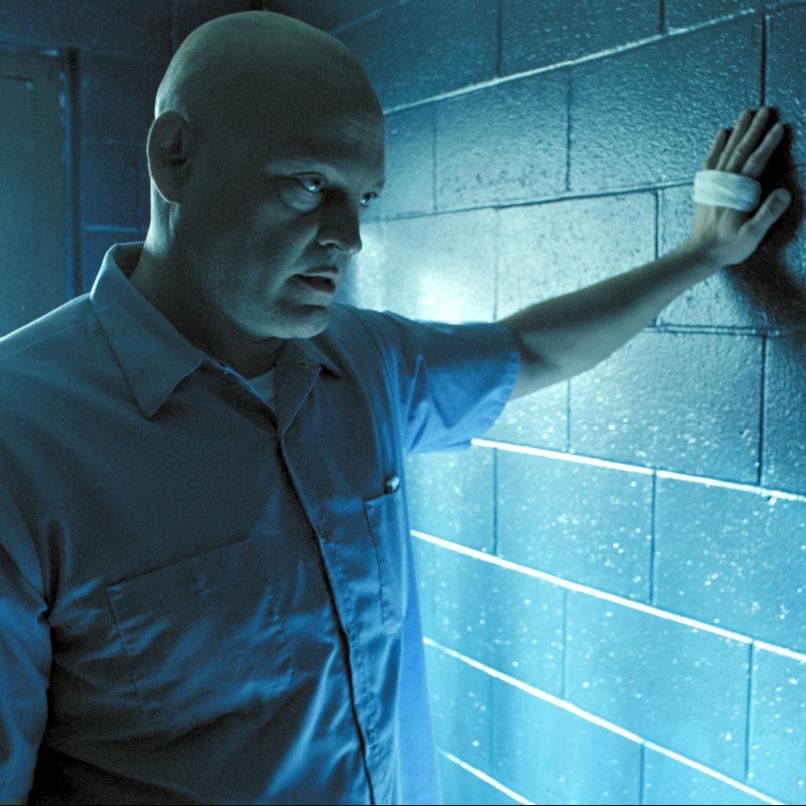 Vaughn, nearly unrecognizable with a thick, bulky frame and a crucifix tattoo emblazoned upon his bald head, plays a sober, recovering bruiser named Bradley Thomas. His story begins as so many before his have, with him losing his job only to come home to the news that his wife, Lauren (Jennifer Carpenter), is having an affair. What follows, however, is the first gasp-worthy scene in a film filled with them — Bradley kills a car. He punches out the windows, rips off the hood, punctures a headlight and yanks out the wiring. If he can do this to a mass of iron, copper, and glass, then dear god, what can he do to a hunk of flesh?

We don’t find out for quite a while, however, as a good chunk of the film is devoted to Bradley’s decision to return to his previous position as a drug runner while maintaining his sobriety and refraining from violence at all costs; he clearly knows what he’s capable of doing. Unfortunately, things don’t go as planned, and soon he’s run afoul of a group of Mexican gangsters and hauled off to a medium-security prison. The stakes are raised, however, when a “Placid Man” (Udo Kier) informs him that his wife has been kidnapped, and that horrible things will happen to their unborn child unless Bradley gets transferred to the Red Leaf maximum-security prison and kill a man contained in its most fortified area, the eponymous Cell Block 99.

Those used to Vaughn’s ain’t-I-a-stinker hijinks might have trouble buying this version of the actor in the film’s early going, but Vaughn’s strength has always been his confidence, which manifests with Bradley in an altogether different fashion. Bradley is a man of duty and loyalty, and the film never finds him without a clear, actionable goal. As such, Vaughn moves and speaks with purpose as he encounters a host of incredible character actors, including Fred Melamed, Mustafa Shakir, Clark Johnson, and Michael Medeiros.

And while Zahler has given Vaughn the strength of two Zangiefs, he’s not trying to frame him as a superhero. The fight scenes, many of which are one-shots, unfold with a striking bluntness, from Vaughn’s careful movements to the thudding sound effects accompanying each hit. They’re as choreographed as any film fight, but unencumbered by the rapid quick cuts and performative swishing of most modern action fare. The restraint Zahler brought to the early scenes of Bone Tomahawk is also on display here, as those fights appear sparsely in the early going before boiling over in a wash of gore in the final act.

Of course, that might be a turn-off for those looking for a thrill-a-minute action flick. Zahler lingers on Bradley’s moments of pained solitude as much, if not more, than he does those action setpieces, which will undoubtedly leave some yearning for the titular brawl just as Milhouse does for the fireworks factory. The film runs well over two hours, after all, and the first act leans heavily on establishing Bradley’s commitment to both his wife and their unborn child in ways that occasionally send the eyes rolling. Bradley’s nobility is important, but it all begins evaporating from the mind once he begins stomping peoples’ faces into the concrete (over and over and over again).

But even if Zahler lingers a bit too long on Bradley’s life in the free world, those sunnier days are important in tracking his slow descent into hell. What freedom looks like is a running theme in the movie; a crumbling economy forces Bradley to again imprison himself in the drug trade, which leads him to a jail where he’s at least treated with a modicum of decency, which leads him to Red Leaf, where a sadistic warden (a deliciously nasty Don Johnson) describes it not as maximum security, but as “minimal freedom.” Red Leaf’s methods of rehabilitation feel plucked from a torture manual, and its various tiers descend further and further beneath the Earth, with cell block 99 looking like the cobwebbed tunnels of some medieval castle. It’s an appropriately wicked setting, almost supernatural in its disconnect from the real world, for a climactic showdown that’s as brutal as anything in Bone Tomahawk. The final shot, in particular, is a thing of cruel perfection.

It’s not easy, balancing careful character development and a vivid sense of place with the bloodlust of expectations, but Zahler’s done it here. Even as all of his world-building threatens to drown in the morass of gore that caps off the film, he wisely takes a breather in the final moments to offer a reminder that Bradley’s actions are all in service of something bigger than himself. Without that, Brawl in Cell Block 99 would be a killer exploitation flick, the kind of thing that would play at midnight screenings across the country. With it, however, he’s created a film that’s bound to linger long after the residual shock fades away.