Plus, the band shares 10 Things they love about cultivating an image 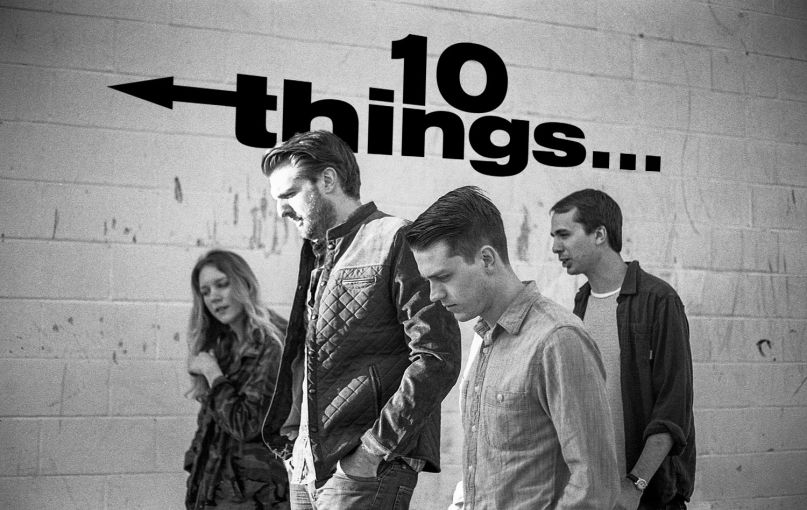 Not that it’s ever been easy, but the proliferation of artists and the constant access provided by the Internet has made it harder than ever to really break out into music. It’s all about how you can stand out and get the most hits or likes or views or whatever it is your “content” is gunning for. As Boston’s CIVIC point out, it’s even more challenging for women, who “are rewarded for seeking or garnering attention, yet expected to achieve effortlessness at all times.”

That’s the expectation the four-piece seek to confront head on with their sophomore album, Face Blindness. Out on November 3rd, the record questions gender-biased standards right from the get-go with lead single “Selena Gomez”. While not directly about the former Disney starlet, the catchy guitar pop track takes aim at the sort of shallow “womanhood” a radio-friendly female singer might be expected to sell. “What are you a container for?/ Do you want to hold on to something more?” asks Dana Osterling on the pre-chorus. “Is there something wrong with me/ Or is there something wrong with everything?”

Even the song’s video wonders about the concept of identity, featuring war-era found footage depicting contrasting ideals of what women’s role is in society. Take a look below.

Speaking — perhaps somewhat sarcastically — more about what it’s like trying to “sell” yourself as an artist in 2017, CIVIC have explained 10 Things they love about cultivating an image. Whether it’s creating online feuds or cross-brand promotional opportunities, this list is a must-read for upstart musicians.

It’s 2017. You’ve gotta be creative when getting your #brand off the ground. That’s why we occasionally try and create a relationship with more established brands such as Biore (above) or even Japanese car manufacturer Honda (@officialhondacivic is our Instagram handle).

Drawing inspiration from others:

Did you know you can be so inspired by other musicians that you can try writing your own songs that sound similar? It’s fun and it turns out the more often you tell people you sound like Rilo Kiley the more likely it is that they’ll believe it.

It’s fun to be self-involved, and it’s fun to support your friends more narcissistic qualities. That’s what makes social media so great. Also that dog filter is simply too much!!!

Finding the sweet spot between national tragedies to release content:

It’s no secret the apocalypse is happening in real time. That’s why it’s so important to try and find that window between national tragedies to release new content. We missed the mark this time but the challenge is half the fun!

I’m sure she’s perfectly nice. I probably just ran into her on a bad day. But now we’re enemies and that’s a shame. But on the bright side, who doesn’t love a celebrity feud?

Whether it’s “too much denim” or “fashion jackets,” it’s fun to share style tips with band mates. Although we’re the first to admit this can sometimes lead to disaster.

Getting to be whatever you want to be (while never escaping the shadow of your parents):

One of the most rewarding aspects of creating music is forming your own identity, while never escaping from the fact that your father was a harder worker than you’ll ever be, Wayne. An album like Face Blindness was such an immersive and collaborative effort that we were almost able to shake the feeling that this isn’t the life our parents would’ve preferred for us, given the countless sacrifices they endured simply to see us get this far.

The group of musicians on this record are only a small part of the larger group of creative individuals that helped create this music. Engineers (John Would of Stanley Recordings and Chaimes Parker of Big Nice Studio), mixers, masterers, PR, cover artists (Kristin Texeira), photographers (Andre Beriau), friends who contributed additional parts on the record… All these roles have to be filled and we feel very lucky to have as many wonderful people helping us along the way.

Bros in sports bars? They like us, sometimes. Women of advanced age who wear kimonos and statement jewelry? Heck yeah you better believe it. College kids who accidentally came to this bar when the house show they tried to go to got shut down? CHECK! We hope we never find our niche, and keep playing to whoever will listen.