Rivers Cuomo turns in his most polished album to date, only without any surprises 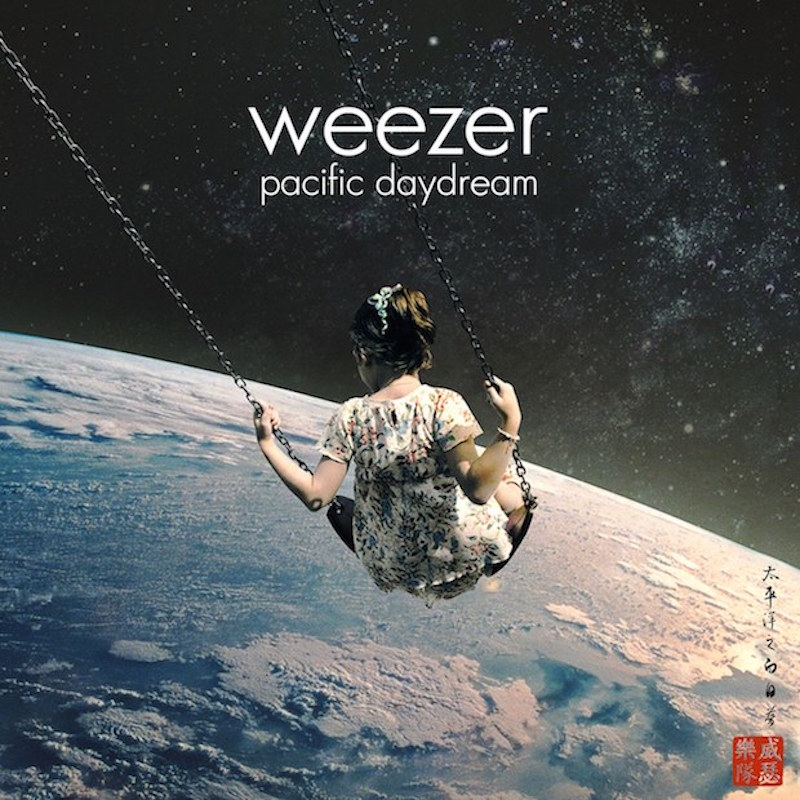 For the life of me, I’ve never been able to tell if Rivers Cuomo grew up too soon or was some kind of late bloomer. It shouldn’t matter, but Weezer have always been a band that necessitated a backstory, at least since the turn of the century. In fact, you all know the tale. To purists, the beloved sons of ’90s alternative/geek rock put out two of the decade’s most beloved albums — one was love at first listen and the other eventually blossomed into feverish true love (and has since become a cornerstone of music critic apologies) — and then they disappeared.

The mythical rumors that swallowed the band were as intriguing as they were plentiful. When I saw Weezer at Warped Tour in 2000, it felt as much like a pilgrimage as it did a Salinger book signing. A year later, Weezer released their Green Album with Mikey instead of Matt, and it was the only time in my youth I knew kids to welcome detention because they ditched school to scoop a record. In study hall, however, one of the dudes with a small, hidden boombox turned to the rest of us, only a few songs in, past the initial stronghold of catchy tunes, and muttered in a squint, “I can’t tell if I like it.” And, to me, that’s been Weezer’s fanbase of yore ever since. But it’s not like Weezer was ever a secret. Hell, their self-titled debut — aka The Blue Album, and from here on out we’ll just do ‘em by color — went platinum within the year (while misunderstood sophomore effort Pinkerton took 20 years).

Like any good, mysterious sci-fi disappearance, upon the band’s return, a question lingered: Is this who I fell in love with all those years ago? Since then, the band’s legacy has been a stirring two-parter, with such a fine line separating Weezer from itself. Longtime fans could go full conspiracy theory about whether Weezer is writing songs for themselves, their fans, or radio DJs these days. It’s hard to gauge (or admit that it’s pointless and self-serving), with all of us left curious about what happened when four men came back from the wilderness.

Sincerity shouldn’t be subjective, but that’s what often seems to keep older fans from wholeheartedly embracing “new” Weezer. They assume singles like “Beverly Hills” and “Pork and Beans” reflect shallow and gimmicky mainstream hopes, not the band’s heart on full goofy display. They don’t think the same guy who evaluated a person’s worth via self-loathing sexual encounters on “Tired of Sex” could be the same guy who wrote “I’m Your Daddy”, a song immediately followed by “The Girl Got Hot”. But people change. Weezer changed. The old fans didn’t.

Yet, here we are, more than a decade and half after Weezer returned from the outer world of rock music mythos and Pacific Daydream might be the album that finally convinces me the sincerity never left in those missing years that gave birth to Homie, The Rentals, The Special Goodness, and (rebirth of) Space Twins. Instead, the big eyes of The Blue Album and the broken heart of Pinkerton gave way to a charming yet prosaic can-do attitude that sometimes ventures into curious mania. Age and experience will do that. When the world comes at you enough, it can be hard to keep acting surprised. Pacific Daydream is the band at their most self-assured, and for it to come after two well-received records feels like the sunshine-hit-machine direction is a choice, not a test.

This album finds Cuomo at the beach in retrospective young adulthood, reliving a spirited west coast adolescence he didn’t have, exploring that strange era of California youth, where you bounce between bonfires and concerts (and pawn shops and pharmacies just to kill time before curfew). All your memories take on a rich sunset as backdrop and your crushes move in slow motion, and you somehow recall spending most of your time on drives along Pacific Coast Highway. It’s an overwhelming age of wonder and melancholy, where a good conversation out of your comfort zone can feel downright life-saving.

But those memories don’t exactly make for songs of depth. Instead, they work as source material for music videos of people turning to each other at beach parties and laughing. This wouldn’t be the interpretation of a band’s debut, mind you. But we’re already profoundly aware that Weezer is able to put out affecting songs about longing (the yearning-heart-sink anthem of Pinkerton’s “Across the Sea”) and stir up a fire (the blasting Blue Album kitchen demo “Paperface”). Most frustrating, though, is that we know the band can still evolve and floor us, proven for good with The Red Album’s legitimate screwball masterpiece “The Greatest Man That Ever Lived (Variations on a Shaker Hymn)”.

As much as there’s been a case of ups and downs, whether from song to song or album to album, the band eventually found their footing. 2014’s Everything Will Be Alright in the End is easily their best album of the 21st Century, filled with an energy impossible not to love, and then came 2016’s solid White Album. A year later, if your hope was for the foursome to dig deeper into the beach, you got it. Pacific Daydream’s opener (and best song on the album), “Mexican Fender”, starts off at a guitar shop on Santa Monica and 7th, and the album doesn’t stray too far from beach camp after that.

Yet, on the very aptly named Pacific Daydream, that west coast fantasy goes a little too far, with Cuomo living vicariously through his own coastal jams. To be sure, Cuomo has what may be fractions of a thousand-plus unfinished pop melodies ricocheting off the walls of his skull. The guy can craft a hit. Here, it’s just missing his wily spirit and feverish heart, which reads weird because of Cuomo’s inability to change the shirt sleeve his heart’s so dang stuck on. The man is undeniably a romantic, whether strictly within the confines of an in-song will-they-won’t-they relationship or his general outlook in interviews. As he confidently strolls through the world he’s created and curated on Pacific Daydream, each tune a diligently shaped puzzle piece, it becomes clear that, aside from blips like the breathy ‘60s drums of “Weekend Woman” and hand-clappy intro of “Any Friend of Diane’s”, the songs aren’t all that discernable from each other. In fact, the songs aren’t much without the others. The album works extraordinarily well together, but the tracks wouldn’t work as, say, singular pulls for a personal mix. You can take or leave the album. It’s good enough. But the songs don’t stay with you.

Every chorus — save for “Sweet Mary”, which more or less rolls through — seems almost scientifically constructed to be radio-hit catchy. The production level is immaculate, and the band have never sounded tighter. But it’s a safe, unsurprising record. To hear it, after everyone’s long history with the band, is like noticing a beautifully polished, expensive statue in the home of one of your geekiest friends. It seems out of place, though it somehow makes sense (because anything would somehow make sense at this point). You just don’t know if they bought the art piece for themselves, their guests, or simply because they think that’s what’s expected of them at this age. With Pacific Daydream, Bell, Shriner, and Wilson helped Cuomo put out a side project solo album. So if you’re looking for the dynamic Weezer album you hoped would follow the last two, this likely isn’t it.

There’s no standout song that churns and chugs like Maladroit’s “Possibilities” or even The Green Album’s “Don’t Let Go”, and there’s nothing on Pacific Daydream that intrigues you like Everything Will Be Alright in the End’s three “Futurescope” songs. It’s a strong album, but it’s not a strong Weezer album. Still, if the post-return Weezer debate must rage on, Pacific Daydream may be the best case for either side, arguing emotional honesty against technical skill. Holistically, there forever remains a razor-fine divide between Weezer’s most enchanting work and its most humdrum output, a kind of Weezer-specific horseshoe theory where a praising description of their finest record doesn’t sound all that different from a critique of their least interesting.

But if you ever wanted to hear Weezer at their professionally sharpest, this is surely it. It’s no surprise that Cuomo is a fan of pop smashes like Carly Rae Jepsen’s “Call Me Maybe”, as Pacific Daydream might be more Train than Ozma. Cuomo doesn’t owe anything to the alternative scene, if such a thing can even exist anymore in the era of everything all the time everywhere. After two albums of chumps like me exaggerating sighs of relief, churning out self-satisfied think-pieces of “oh, thank goodness, the boys have finally come home,” it might be that Cuomo gave us the damn records we wanted, so he could just go back to writing fun pop songs about summer. I doubt it, though. Given the two-step, this might be the record that definitively proves there’s simply a duality to Weezer that’s long been mistaken as before and after. This is who Cuomo and crew have always been, and it’s not their fault we decided to make them gods of the garage.

(Ranking: Every Weezer Album from Worst to Best)

In truth, this might be the beginning of a Beck-like career, where it’s less windy road and more bursts of interest — specific explorations unbeholden to what Weezer is supposed to be. Still, we’re always going to root for them to lean more toward Blue Album and Pinkerton than Raditude or Hurley, because Weezer seemingly bounces between being a damn good band and one that could be. Pacific Daydream just happens to be very shiny middle ground, reminding us that somewhere in Rivers Cuomo, there’s still an East Coast kid listening to the radio and fantasizing about life in Los Angeles. For the band to be at its full potential, though, the songwriter needs to reflect more on the takeaways of experiences rather than the moments themselves.