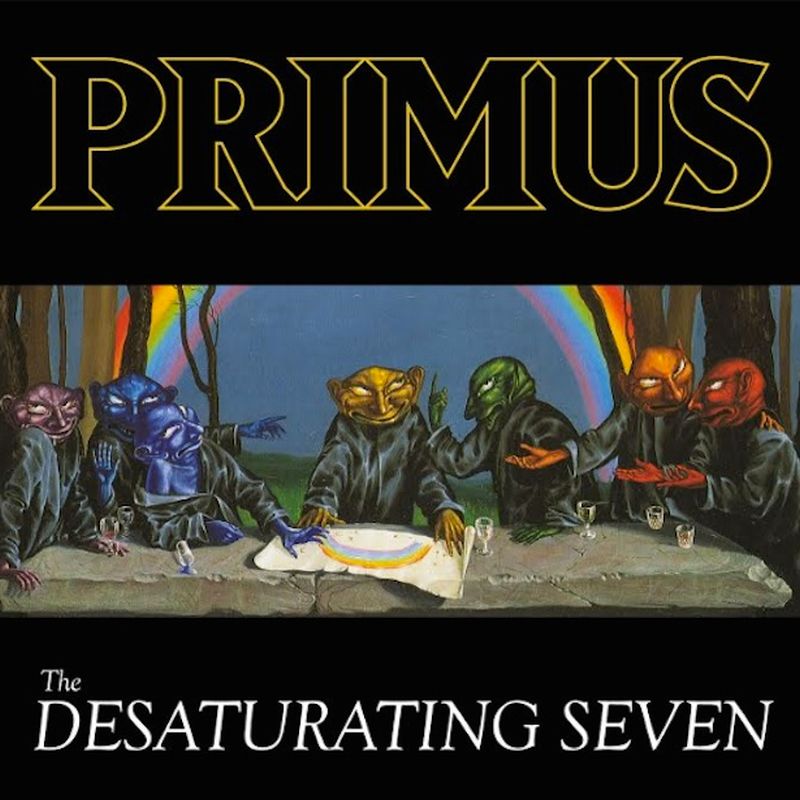 In 2017, there’s still only one answer to a question like this one: “What band could take an obscure children’s book about goblins who devour rainbows and spin it into an oddball concept album?” Certainly there exist enough eccentric progressive rock bands out there who might want to take a stab at that premise – Devin Townsend could work some oddball magic with it. But no group other than Primus boasts a résumé sufficiently deranged enough to rise to the task of creating a musical rendition of The Rainbow Goblins, by the Italian children’s book author Ul de Rico. The titular goblins of The Desaturating Seven aim to consume the colors of the rainbow, and it is Primus’ goal to bring new shades of color to de Rico’s narrative.

Although characteristically weird for Primus, The Desaturating Seven marks a new phase in the band’s career. Drummer Tim Alexander, who returned to Primus on 2014’s Primus & the Chocolate Factory with the Fungi Ensemble, a re-arranging of the 1971 Willy Wonka & The Chocolate Factory soundtrack, makes his first original songwriting contributions to the band since the mid-’90s. Primus’ album output slowed following Alexander’s absence, in sharp contrast to their kinetic pace in the early ’90s. The first four Primus records dropped between 1990 and 1995; sans Alexander, the group put out four more LPs between 1997 and 2014. The mid-to-late career albums feature some of the group’s sharpest tunes: Antipop (1999) closes with a demented, carnivalesque waltz starring Tom Waits, “The Coattails of a Dead Man”, and the Brown Album (1997) houses some of frontman Les Claypool’s most distinctive basslines, such as those on “Fisticuffs” and the unsubtly euphemistic “Shake Hands with Beef”. The core Primus sound never waned, even as the gaps between releases went from two years to over a decade, with 2011’s Green Naugahyde arriving 12 years after Antipop. Yet, Alexander’s rejoining the band does feel significant, particularly for a trio that has remained active for as long as this one. With Alexander on the drums, Primus gave the world “Jerry Was a Racecar Driver” and “My Name Is Mud”. Could such lightning strike again?

Well, not exactly. At the basic level of instrumentation, The Desaturating Seven exhibits a confident musical interplay between Claypool, Alexander, and guitarist Larry “Ler” LaLonde. It’s as if no time was needed to get the old sparks flying. Claypool and Alexander gamely jump across some jagged time signature changes, particularly on lead single – if one could call it that – “The Seven”. “The Storm” quickly builds to a guitar riff by LaLonde that echoes the best kind of ’70s classic riff rock, with LaLonde’s two bandmates providing a rock-solid rhythmic foundation to bolster the punch of the guitar. For these three men to be able to perform at such a high caliber after having spent years apart is no small feat. The “King Crimson produced by Adult Swim” aesthetic of Primus is alive and well.

But The Desaturating Seven proves to be an unusual place – yes, unusual even for Primus – for Alexander to return. Claypool, who brought the del Rico source material to his bandmates, perhaps wanted to stay true to the kid’s book origins of the story in keeping the record a brisk 35 minutes, with three of these seven songs clocking in at three minutes or less. Given the concept album’s reputation for excess and instrumental wankery, the thought of a concise concept album – particularly when it involves rainbow-eating goblins, a subject that unsurprisingly is not easy to keep up with when delivered in Claypool’s cartoonish drawl – has appeal. Primus’ songwriting on The Desaturating Seven, however, errs a bit too much on the side of brevity, resulting in a record that feels like an EP that has overstayed its welcome. Opener “The Valley” uses up much of its runtime on a storybook narration; unfocused instrumental “The Dream” noodles on for a few minutes until Claypool’s unmistakable bass thumbing brings the track to a forced rush of a conclusion. These two tracks and “The Ends”, a hurried curtain drop to this story, make up over a third of The Desaturating Seven. Plenty of interesting ideas crop up on the remaining two-thirds, but Primus give so much space to half-cooked ideas that even the interesting instrumental passages get lost in the mix.

The fleetingness of The Desaturating Seven should have been easy for Primus to avoid. Even if one can’t get past the gonzo subject material of Claypool’s lyrics, the constant taffy-like basslines, or the association of Claypool with the South Park theme song, one can’t fault Primus for a lack of ambition. The group’s quintessential recordings are stuffed with zany musical experimentation that’s willing to stretch outside the verse/chorus format the trio so frequently employs. No matter the album, Primus is always, unapologetically, itself. The same holds true on The Desaturating Seven, yet the trio’s style never gets the chance to fully flourish. Conceptually big but musically slight, this return of the early ’90s Primus lineup promises a lot but delivers only fragments of what we know this band is capable of.

Essential Tracks:: “The Seven”, “The Storm”