Margo Price – All American Made

Price delivers a wonderful new record with poise and self-possession 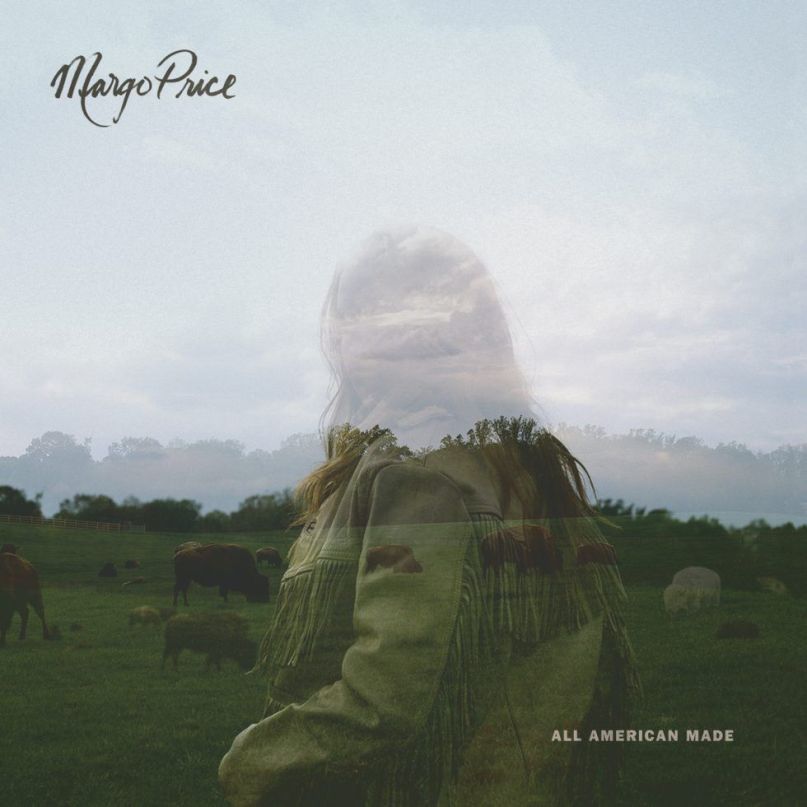 Margo Price doesn’t seem to care for the notion of being a country traditionalist and the cult success that comes along with it. The 34-year-old singer-songwriter would much rather name-drop David Bowie and Willie Nelson in interviews as artists with the ideal chameleonic career paths and spend some time courting mainstream fans touring as Chris Stapleton’s opening act. She’s also wisely aligned herself with Jack White, a musician who has adapted elements of roots music and raw rock to great acclaim and whose label, Third Man Records, has released all of Price’s solo material to date.

But there’s still something unabashedly throwback about Price. After years of smoothing out her vocal timbre as a member of Buffalo Clover, the ‘70s rock-influenced group she was in with husband Jeremy Ivey, she’s let the twang take the lead. And much like the Nashville grinders who turned that Tennessee town into Music City U.S.A., she’s not letting this wave of buzz and momentum go to waste, hurrying out her second album, All American Made, only 19 months after her debut (last year’s Midwest Farmer’s Daughter).

Mostly, it’s the sound of Price’s albums that have given her art an old-school air. She and Ivey (who co-wrote many of the songs on both LPs) are clearly steeped in the ‘60s and ‘70s outlaw country aesthetic, which brought elements of psychedelia, blues, and soul into tales of romantic and personal hardship.

With a little more time and money to burn, Price and co. spiced up the nervy and raw sound of Midwest with the addition of a string section on some tunes, some gospel-like backing vocals when needed, and a little ProTools augmentation to create the collage of presidential speeches that floats in and around the title track. Otherwise, she and the band stick comfortably to their chosen lane, setting the folksy shuffle of “Heart of America” next to the Willie Mitchell-like groove of “Do Right by Me” and the doleful ballad that is “Loner”. She even pays a small tribute to her idols by inviting Nelson in to duet and drop a jazzy acoustic solo on “Learning to Lose”.

The modern updates to this vintage sound go beyond the music. Price does give the kiss off to a useless beau on “Don’t Say It” and sings about finding her way in the world on “Do Right”, among other tried-and-true country tropes, but what’s striking about this album is her lyrical focus on larger societal ills.

All American is unapologetically feminist in the mode of Loretta Lynn’s birth control anthem “The Pill” and Dolly’s “Just Because I’m a Woman”. Price, though, explores many shades at once. While there are comments about the double standard of women artists balancing the work of music, marriage, and parenthood while their male counterparts cut loose on “Wild Women”, she allows that she might just go a little crazier than the rest while she’s on tour since father and son aren’t there. She even drops the f-word into “Pay Gap”, her Cajun-tinged head shake at income inequality, but when she says it, it’s dismissive (“Don’t give me that feminism crap”). In her eyes, it’s not simply about sexism; it’s just about the bottom line.

The larger struggle on the album has to do with those values of hard work and the good ol’ days espoused by the past 40 years of country artists and how they fit into her more liberal mindset. The final third of the album is an exhausted look at how the so-called American dream is leaving many working-class citizens behind. It has the ring of personal anguish to it as well, singing on “Heart of America” about “men in suits” taking “every field my family owned.” It doesn’t come from a place of anger or surrounded by bootstrap pulling declarations, though. Price knows there’s no going back and quietly encourages us to stick together lest it all happen again in other industries.

Price saves her most damning criticism and her most empathetic expression for the title track, which closes out the album. The montage of oratory that provides a backdrop for this song features addresses from Bill Clinton, Martin Luther King, Barack Obama, and Richard Nixon, all circle around this theme of eschewing our differences for the betterment of us all. Her lyrics, though, tell a different story: of a government that often works against its best interests (she calls out Reagan for selling weapons to Iran) and wondering if “the president gets much sleep at night/ And if the folks on welfare are making it alright.”

And Price keeps returning to that title phrase, once such a point of nationalistic pride, now almost a nasty insult. What you take away from this song is what you brought to it. If you find that kind of talk infuriating, it’s gonna piss you off. Or you may find it an inspiring message to keep resisting the idiocracy we are in the midst of. That’s a lot of power for one song to wield, but Price handles it, like the rest of this wonderful album, with poise and self-possession.

Essential Tracks: “All American Made”, “Don’t Say It”, and “Do Right by Me”