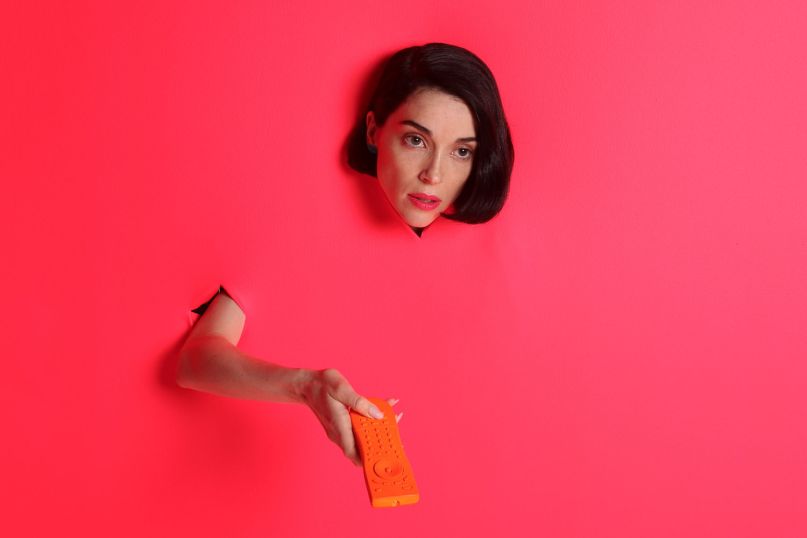 The signs have always been there, if you knew where to look for them. The wide-eyed, sweet-looking ingenue on the cover of 2007’s Marry Me actually wasn’t very interested in getting married at all. There was definitely something subtly sinister lurking under the chamber pop flourishes of 2009’s Actor. 2011’s Strange Mercy was more explicitly unapologetic, finding St. Vincent, the performance persona of Annie Clark, confessing, “I’ve told whole lies with a half smile. I’ve thrown rocks, then hid both my arms.” And on 2014’s Grammy-winning self-titled record, Clark went full-blown near-future cult leader, dyeing her hair lavender and describing the finished product as “a party record you could play at a funeral.”

Clark has dealt in ideas of truth versus artifice and appearance versus reality for much of her career, but as her notoriety, fan base, and reputation as one of the most talented guitarists of her generation have grown, not to mention her tabloid recognition through very public relationships with bona fide celebs Cara Delevingne and Kristin Stewart, her concern about painting a pretty picture has inversely diminished. Before the release of her fifth and potentially most ambitious record yet, MASSEDUCTION, due out October 13th, we give you 10 times that St. Vincent gave no fucks.

10. When she claimed “all my songs are about John Mayer”

Annie Clark is a veritable master of deadpan humor. As she’s emphasized on a few different occasions in recent conversations with reporters, Clark sees songs as Rorschach tests, revealing more about the listener than the intent of the person who made them. But in case you really must know the specifics, “All my songs are about John Mayer,” Clark told Vogue’s Carrie Battan in September with a completely straight face, casting lyric “Marry me, John” from 2007’s Marry Me in a whole new light.

09. When her very first band was called Skull Fuckers

The hardcore band that Clark was a member of in her early 20’s in her hometown of Dallas, Texas? The Skull Fuckers. Enough said.

It's not easy to compete against a cheating team but at least we looked good doing it. 🇺🇸#CaptainCara #VodkaChelseaHandler

Clark gained a higher level of visibility, for better or worse, when she began dating British model and actress Cara Delevingne in 2014. Pictures of the two of them were splashed across magazines, newspapers, and the Internet, and if the increased level of scrutiny about her love life and her sexuality bothered Clark, she didn’t let it show.

The fact remained, however, that Clark was dating a member of Taylor Swift’s beloved and much-flaunted squad, and that meant she garnered an invite to the pop star’s annual 4th of July party in 2016, even donning an American flag onesie in solidarity with celebrity guests like Karlie Kloss and the Haim sisters. If it seemed strange that an art rock visionary like Clark would spend our nation’s birthday at a party hosted by a country/pop star who once rhymed “Chevy truck” with “gettin’ stuck,” Clark didn’t seem to give a single, solitary — well, you know.

(To be fair, Clark would later work with Jack Antonoff, Swift’s 1989 collaborator, on MASSEDUCTION.)

07. When she intimidated a New Yorker reporter

New Yorker reporter Nick Paumgarten went deep for an August 2017 profile of Clark, hanging out with her at Electric Lady Studios during the recording of MASSEDUCTION and tagging along to photo shoots in Los Angeles. He captures a portrait of a fiercely independent artist who is deeply committed to her work, but also someone who delivers niceties at a certain remove — like “through a glass case.”

Clark used Paumgarten’s name a lot, and he observed, “Her cheery use of the name of the person she is addressing can seem to contain a faint note of mockery.” He continues, “There’d be times, in the following months, when I’d walk away from a conversation with Clark feeling like a character in a kung-fu movie who emerges from a sword skirmish apparently unscathed yet a moment later starts gushing blood or dropping limbs.” Ouch.

06. Whenever she gets savage on her songs

Clark is an expert at weaving unsettling or downright savage lyrics into songs that, at first blush, seem upbeat and cheerful. “You’re the curses through my teeth,” she swings sweetly to a problematic lover in “Actor Out Of Work”. Other tropes and images interspersed throughout her discography include psychopaths, rattlesnakes, laughing with a mouth of blood, a Smith and Wesson, Paris burning, and the apocalypse. “I’m crawling through landmines,” she sings on “Landmines”, from 2007’s Marry Me. “I know, ‘cause I planted them.”

“Los Ageless”, one of the first singles from MASSEDUCTION, is Clark at her off-kilter, shade-throwing finest. “The Los Ageless hang out by the bar,” she sings. “Burn the pages of unwritten memoirs.” It’s a discomfiting critique of LA culture, but it contains a dose of self-awareness for Clark, who rarely writes a song that doesn’t contain a dark, unsettling undercurrent. “I try to tell you I love you and it comes out all sick,” she sings in the song’s outro, leaving longtime fans nodding in agreement.

05. When she directed a horror film

Although she’s made a name for herself as an unparalleled lyricist and guitar virtuoso, Clark didn’t shy away from testing out her directorial chops earlier this year in The Birthday Party, a short film produced for the larger female-driven horror anthology, XX. It centers around an eight-year-old’s birthday party and a suburban housewife, who has found her husband dead just that morning, who’s in charge.

In August, Lionsgate Pictures announced that they had launched development of an adaptation of Oscar Wilde’s 1890 novel The Picture of Dorian Grey, with a twist: the titular character would be female. The project is set to be directed by Clark. She hasn’t released a public statement about her involvement yet, but if the film is half as strange and meticulously stylized as her music, everyone’s in for a treat.

04. When she appeared in an ad for Tiffany and Co.

Is it an odd look for a musician who came up on a small-scale independent label to be endorsing expensive luxury items, like perfume and thousand-dollar diamonds? Clark doesn’t seem to think so. This summer, she covered The Beatles’ “All You Need Is Love” to soundtrack a commercial advertising Tiffany and Co.’s first new fragrance in 20 years, and can be found in a print ad campaign for the jewelry company modeling diamond necklaces. “There’s only one ANNIE CLARK,” the ad copy reads. Could this be the start of some kind of long-con performance art piece on the pitfalls of materialism and capitalism? Only time will tell.

03. When she played a benefit concert as a purple toilet

In June of 2016, Clark played a benefit show at New York’s Le Poisson Rouge for her drummer’s son, who was in recovery after suffering a seizure. As part of a loaded bill that included Father John Misty and Rufus Wainwright, Clark played a set that included the debut of her song, “New York”, while wearing a purple foam toilet. The piece was a costume remnant from her short horror film “The Birthday Party”, which had just wrapped filming. When an interviewer later commented on the sartorial choice, Clark explained that as part of the performance, she and a dancer did “a sort of vaudeville act” where she was reading a book onstage about public sex. Clark described the connection between the two as “completely meta”.

02. When she filled in for Kurt Cobain

Some artists might be intimidated to the point of immobility by being asked to replace Kurt Cobain in the original Nirvana lineup, but not Clark. During the 29th Rock and Roll Hall of Fame induction ceremony in 2014, which saw Nirvana joining the Hall’s ranks, Clark took center stage in front of Dave Grohl and Krist Novoselic to play lead guitar and vocals on a Nevermind track, “Lithium”.

Clark has said that Nirvana was one of her most beloved bands as a kid, and that becoming familiar with their music through MTV played a big role in inspiring her to become a musician. She delivered a skilled and muscular performance as the third part of the legendary trio, and later told NME that Grohl and Novoselic’s choice to put women front and center (they were joined on other classic songs by Lorde, Kim Gordon, and Joan Jett) during their Hall of Fame performance was a wonderful way of honoring the Olympia, Washington “punk, freak, queer, feminist scene that the Nirvana guys came up in…that sort of gets whitewashed in all the retrospective.”

01. Everything about her “interview kit” for MASSEDUCTION

The press grind can be brutal. Answering the same handful of questions over and over again is enough to transform the smile of even the most humble, down-to-earth artist into a grimace, and for female artists in particular, questions like “What’s it like to play a guitar solo in heels?” can come across as not only redundant, but incredibly condescending.

In response to the onslaught of repetitive, basic-ass questions that were surely coming in advance of her newest release, MASSEDUCTION, St. Vincent enlisted her friend Carrie Brownstein in writing the script for a series of pre-taped, stock responses. Armored in vinyl separates, a fluorescent pink lip, and a manicure that reads “FUCK OFF”, Annie Clark deadpans her answers to off-camera questions such as “What advice would you give to young musicians today?” in front of a green screen. “I’d tell them to get into the film industry,” she replies, not missing a beat. Does she Google herself? Never. It’s the one form of masturbation she really doesn’t enjoy. The short clips were distributed via her Instagram account.

At the center of Clark’s publicity campaign for MASSEDUCTION (and, really, much of her career) is the question of whether female artists are supposed to be relatable. The whole thing is funny, yes, but it runs the risk of coming off as ungrateful, prickly, or snide. Clark, however, has spent her whole career flaunting the appearance of her petite frame and delicate features with her monstrous guitar skills. With this package of videos, she seems to trust that her fans will laugh at her dead-serious demeanor, feeling as though they’re in on the joke.