Could this be the year Christopher Nolan finally wins Best Director? 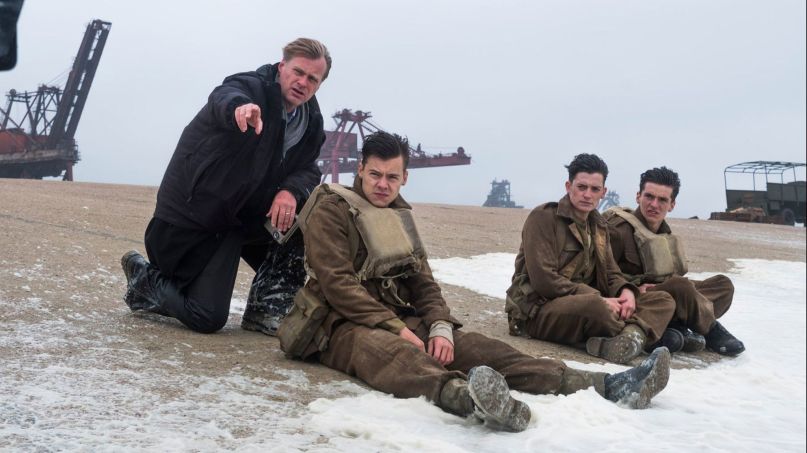 The Academy Awards may not return until March 4th, 2018, but we’re already approaching a certain type of filmgoer’s favorite time of the year: “Oscar season.” It’s far from the only film awards show of notable reputation at this point, but it remains the gold standard, and it still carries enough weight for some of the year’s best and most notable films to have their release schedules built around the pivotal December 31st release deadline.

To keep movies fresh in the minds of voters, the cycle typically demands that most year-end contenders be released in the year’s final third. At one time, December was a haven for would-be hopefuls; now, major players can arrive as early as September and frequently in October. But we’ll get to those films in next month’s installment of Road to Oscars 2018. Before we can jump into what’s yet to come, we have to look at what’s already arrived that could play into the proceedings.

It’s fairly common wisdom that big-budget summer fare, while not necessarily excluded, often has a harder time making its way into the late-year conversation. However, with an Academy voting body that’s skewing younger and more diverse than ever before, it’s wholly possible that the 2018 ceremony could include some of 2017’s less likely choices. To that point, we’ve compiled a quick rundown of which films could have a chance to step into the race. From the likely bets to the dark horses, we have you covered on essential (and far less essential) viewing from the year that’s been, so far.

Whatever makes the cut, we can say with relative certainty that it won’t be Baywatch. As far as the rest? Read on.

One of this year’s likely front-runners, even after dozens of other titles come and go, is Christopher Nolan’s war epic about the evacuation and siege of Dunkirk. Although it’s unlikely to make too much noise in the acting categories, given that its uniformly terrific performances are given limited screentime for all of the sprawling cast members, we’d put early money on Nolan getting a Best Director nod (and being a front-runner to win) for the film’s stunning, largely CG-free staging of one harrowing wartime setpiece after the next.

The laurels will hardly stop there. Hoyte van Hoytema’s gorgeous IMAX photography will look to make substantial noise for Best Cinematography, Hans Zimmer’s anxious clockwork score is the best of the year so far, and it’s a virtual lock to run away with most of the technical categories. (Say what you want about the film’s deliberately cacophonous sound design, but it’s one of the most overwhelming theatrical experiences we’ve had in years, in a good way.) Whether it can make the cut at the Best Picture level remains to be seen, but it’s entirely possible that Nolan’s most succinct project in years may be the one that finally wins him the big one, after Inception was nominated at the 2011 ceremony.

While the Oscars are sometimes gunshy when it comes to comedies, The Big Sick has more in common with James L. Brooks’ empathetic dramedies than with most of the prior outings from Judd Apatow as a key producer. Considering that Brooks was honored multiple times by the Academy, including a Best Picture win for Terms of Endearment, we’d bet that Kumail Nanjiani and Emily V. Gordon’s autobiographical tale of their especially unconventional courtship will make some noise at year’s end, between its widespread critical praise and its status as this summer’s biggest indie success.

It could well work itself into the Best Picture race on the strength of its crowd-pleasing presentation, but at the very least we’re expecting a Best Original Screenplay nomination for Nanjiani and Gordon. While we’re at it, we’d make a wholehearted case for Nanjiani’s coming-out party as a leading man for Best Actor and twin Supporting nominations for Holly Hunter and Ray Romano as his ex-girlfriend’s sardonic parents. It’s a film that excels on the strength of its performances, and it warrants major consideration in that respect.

Stay with us here. Some might call Jordan Peele’s surprise horror smash a long shot given the Academy’s general reluctance to honor genre fare, but his screenplay managed to do what few films of any ilk accomplish in a year: capture the zeitgeist in a real way. He tapped into a vein of cultural phobias and anxieties, turning his debut feature into such an obvious slam dunk that it’s shocking so few horror directors had explored white privilege as a source of terror before now. It’s not the likeliest option in the world, but we can absolutely see Peele being honored for the kind of horror movie that we can already see standing the test of time.

Read our full review: Get Out.

This could still go either way; Detroit’s release was met with a substantial deal of controversy, about its grisly true-life violence and about director Kathryn Bigelow and writer Mark Boal’s handling of the Algiers Motel tragedy in 1967 Detroit and the surrounding uprising throughout the city. If voters read its for its searing, nightmarish approach to the period piece, Bigelow could be honored again after The Hurt Locker won Best Picture and Zero Dark Thirty was likewise nominated. The backlash could prove to be too much for it to gain the necessary traction, however. That said, Will Poulter (as a racist cop) and Algee Smith (as a touring R&B singer trapped in the middle of the night’s horrors) are both supporting performances worthy of awards season recognition, standouts in a uniformly good-to-great ensemble cast.

At the beginning of 2017, the DCEU existed in a cloud of negativity in the wake of last year’s pair of fiscally successful but critically panned features. And as it’s been for decades in the comic pantheon, in came Wonder Woman to lend a sense of hope to comic book adaptations the world over. Patty Jenkins’ unusually optimistic origin story isn’t the world’s likeliest contender, but it’s garnering some serious buzz in the wake of announcements that Warner Bros. have plans to make a serious year-end push for the film, throwing its weight behind Jenkins and the film alike. Take a “wait and see” approach, but don’t be shocked if you hear even more about Themyscira’s proudest daughter in a couple months’ time.

Best Documentary is always a tough category to call, due to the Academy’s litany of rules about what does and doesn’t constitute an eligible nominee. That said, the safest bet we’ve seen so far is Whose Streets?, Sabaah Folayan and Damon Davis’ wrenching chronicle of Ferguson, MO, in the wake of Michael Brown’s fatal shooting by a Ferguson police officer and the resulting demonstrations. The film faithfully captures the strength of the city’s BLM demonstrators even as it examines the toll it takes on residents and protestors alike, particularly when their rebellion is met with disdain and misinformation at the national level. It’s the kind of documentary that taps into a crucial moment in American history, right as it’s happening.

Read our full review: Whose Streets?.

The idea of a Best Picture winner also serving as an entry in a long-tenured superhero franchise seems unlikely, but if ever there were a time for the Oscars to honor this decade’s most prominent film subgenre, it would be with James Mangold’s neo-Western farewell to Hugh Jackman’s iconic take on Wolverine. Jackman gives one of his best performances to date as a grizzled, beaten-down version of Logan, and Patrick Stewart deserves Supporting Actor consideration as a weathered, late-age Charles Xavier. As a superhero movie, it may be one of the best ever made. As an X-Men story, it’s easily the best to date. And as a revisionist, futuristic action film, it’s a remarkable piece of filmmaking, particularly in today’s increasingly restrictive franchise system.

War for the Planet of the Apes

Like Wonder Woman, 20th Century Fox has already confirmed plans to mount an aggressive campaign for Matt Reeves’ conclusion to the new millennium’s most unexpectedly excellent trilogy. In addition to the continuous hope that Andy Serkis will finally be honored for his moving mo-cap performances as Caesar, Fox plans to throw its weight behind the film in general, already cementing it as 2017’s least likely contender yet. But given how great a modern update of Planet of the Apes turned out to be, stranger things have happened.

Read our full review: War for the Planet of the Apes.

Okay, so that F CinemaScore might have more of an adverse effect on Darren Aronofsky’s latest mindfuck than previously expected. But after the Oscar love shown to Black Swan and the feral power of Jennifer Lawrence’s leading turn, it’d hardly be a shock if the highly divisive feature ended up getting some traction. Especially when Paramount is clearly all-in on backing and defending the film.

While the Weinstein Company’s release strategy for Taylor Sheridan’s directorial debut was scattershot, to say the least, Wind River has received the same kind of positive audience response and quiet financial success that led Hell or High Water to a surprise Best Picture nomination earlier this year. While critics have been a bit more divided on this feature than the last two of Sheridan’s screenplays, we’d hardly be surprised if modern history’s most gifted Oscar pushers manage to work their magic yet again for this sparse, violent tale.

We can dream, alright? It’s likely to be overshadowed in an extremely crowded year, but Edgar Wright’s first nine-figure hit is every bit as deserving of some Best Film Editing recognition as anything else we’ve seen this year, if not more so.

So far, we’d call the modest success of Cars 3 enough to garner Pixar another of its yearly nominations for Best Animated Feature, although Coco could well steal its thunder (or lightning) come November. Despicable Me 3 could make it if its generally tepid reception doesn’t interfere, and we’ll be here quietly spending the next five months hoping that The Emoji Movie can’t supplant Norbit as the worst modern movie to be nominated for an Oscar.

Read our full reviews: Cars 3, Coco, and Despicable Me 3

Robert Pattinson’s best performance to date, in the Safdie Brothers’ unnerving crime saga, wasn’t seen by nearly as many people as it should have been. It absolutely warrants some late-season notice, even if A24 likely has its eggs in several other more likely baskets this year.

An Inconvenient Sequel: Truth to Power

If An Inconvenient Truth was able to take home the Best Documentary trophy, it’s possible that the chronicle of Al Gore’s continued efforts to spread global awareness of climate change could make it into the race. That said, so far Sequel doesn’t seem to have captured general audiences’ attention in any way even close to what that film accomplished.

Read our full review: An Inconvenient Sequel: Truth to Power.

It may be a small feature, but director Kogonada’s debut is both one of the year’s best (and most slept-on) films and one of its most visually stunning, despite simply capturing the dynamic architecture of the titular Indiana town. Elisha Christian’s cinematography gives vibrant life to the town’s unique building designs, matching the passion that its wandering leads bring to the subject.